If you can dream it, you can do it.

That seems like a pretty ideal motto for crowdfunding, which looks to be a craze as of late. Everything we’ve ever wanted has happened through crowdfunding–the new Veronica Mars movie, Goldieblox, the engineering themed toy for girls, the revival of the Reading Rainbow TV show, even an insanely simple mosquito repellent (which I think I need–Kansas mosquitos are vicious). And, we’ve all heard the infamous potato salad story. The guy only asked for $10 to make a side dish and suddenly winds up with $55,000 in a matter of weeks, and nobody really has any idea how it happened. 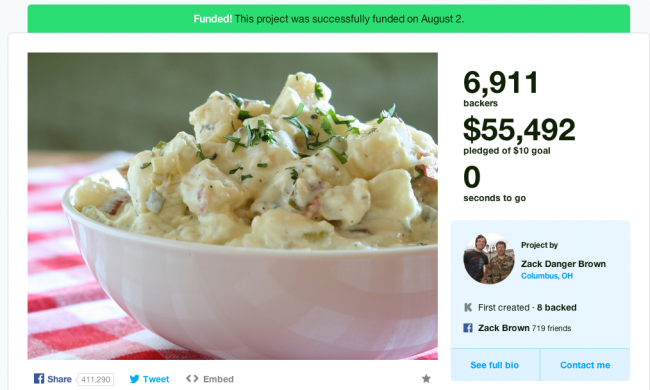 That’s crowdfunding. Is it good? Is it bad? How does it function in the music world? There are a lot of questions surrounding this campaign platform. Despite being around for about seven years, it’s still a bit of a confusing topic. There seems to be some skepticism around the idea of donating to a cause online. However, the platform is gaining traction quickly because it promises the opportunity to fund a dream.

So firstly, what qualifies a campaign? One of Kickstarter’s policies is that whatever you seek to create, your project must be something to share with others. Potato-salad guy offered to mail his backers a bite of potato salad in return for their contribution, and since the rewards were all made up of his own creation, the project met the requirements and went live. Then it went viral.

People have debated how similar crowdfunding is to busking, and that’s a valid question. What’s the difference between throwing a couple bucks to a musician on the street and one on the internet, except that now you can charge your credit card to do it? The reason crowdfunding works is because while it is a donation to a cause on the surface, mostly it’s a simple business transaction. You get something in return. In this way, your money becomes a genuine investment. With music campaigns, backers are usually helping the artist to put out an album without the help of a record label or the promotion that comes with one. Basically, you just pay for the music in advance, and isn’t that exactly how a pre-order works? Artist Amanda Palmer is probably the best example of a music crowdfunding success story you will ever see. Palmer set out to raise $100,000 to record a new album, go on tour, and publish an art book for her backers. Her project ended in May 2012 1,192% funded. She raised nearly $1.2 million. With the help of her best selling author husband Neil Gaiman, Palmer shared the campaign all over the world and was able to reach her goal ten times over, and she made a professionally shot video and used it to inspire her fans and their friends.

The platform chosen also makes a difference. Kickstarter lets you raise all the money you want within a given period of time, but if you don’t make the goal by the deadline, you don’t get to keep the money. IndieGoGo is a little different in that it offers flexible funding, which allows you to keep whatever money you make. There are some pros and cons to each platform. Kickstarter has a nearly 50% success rate on the projects it hosts, while IndieGoGo can only claim 9% of its projects reach their goals. Kickstarter has stricter rules for campaigns and rewards, which probably contributes to its higher success rate. The website claims that it reduces risk for both the creator and the backers. IndieGoGo offers campaigns that support families and charities as well as project ideas, so a backer could donate to a memorial fund, someone’s hospital bills, or getting a new car.

PledgeMusic is also a popular platform, 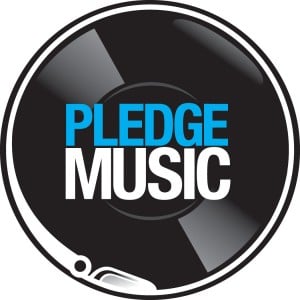 especially for musicians, as it is dedicated purely to the artist/fan relationship. The website claims it’s not a “fan-funding” platform but rather one that offers fans unique experiences and rewards from musicians. PledgeMusic combines the best of both the other platforms with low-risk fixed funding and quality projects as well as donating to people and charities instead of just ideas. Derek Archambault of Defeater successfully raised enough money to undergo hip surgery through PledgeMusic by offering a new EP for sale, and has promised to get back to touring after his recovery. However, this platform also comes with the highest fee–a flat 15% goes back to covering PledgeMusic costs. IndieGoGo starts with 9% upfront, but if you reach your goal, 5% is returned to you for a final 4% of fees (but take into account the platform’s low rate of projects that actually reach their goal). Kickstarter’s fee is 5%.

While the crowdfunding campaigns can be enticing on the surface, you have to go into it with full knowledge of the platform, the costs, and your chance at success. Musicians especially must take into account their existing fanbase. Amanda Palmer’s campaign worked because she had already built up her fanbase through a record label with a previous album, not to mention her numerous releases with The Dresden Dolls and Evelyn, Evelyn. She was able to depart from her label and do things a little differently because her fans were already behind her. She wasn’t trying to build a fanbase and put out a record by herself at the same time. That’s the crucial aspect of the crowdfunding craze right now. It’s probably not worth actually leaving a label unless you have a fanbase large enough to support you through a self-produced record and self-promoted tour. If you’re a smaller band already doing the DIY thing, starting a Kickstarter probably wouldn’t hurt you, but it’s unlikely that it would help. It all comes down to the fans and how many people can be inspired by the campaign. Without an already accumulated fanbase, no one is going to see your campaign except your immediate family and friends. You’d have to be a social media demon to get the word out to enough people to be successful (or go viral with potato salad). I’m not saying it’s impossible. Plenty of musicians are successful with independently released music. However, a record label can be extremely helpful, even in the digital age, to gain connections and promote your music. Crowdfunding simply can’t do all those things. 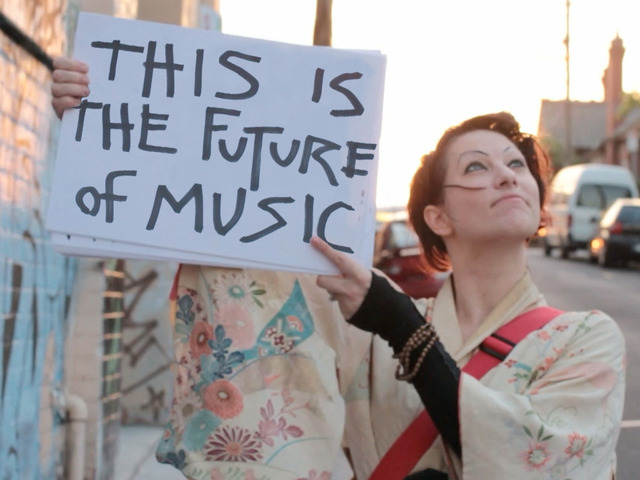 There are some amazing success stories behind Kickstarter and IndieGogo and PledgeMusic, among others. I myself am happy to donate a few dollars here and there to music I want to hear or a project I believe in. If you can tap into what people want, you’d probably do well to start your own campaign online. My piece of advice? Don’t give up if you really believe in your idea, but make sure you run all the numbers and give yourself a chance to succeed.

Maybe crowdfunding is the future. It’s certainly a bright method for the ambitious entrepreneur, the optimistic do-it-yourself-er, or anyone with a decent idea. After all, it’s definitely here to stay, and it looks like we’ll see some great things come out of it.

Now, if only I could get a Kickstarter for another season of Firefly!