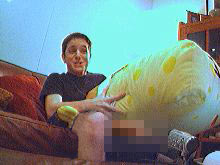 Autopilot Off entered the studio last month to record their major record debut for Island Records with producer Greig Nori. To help bring their fans into the process, the band set up a webcam where visitors could watch the band members recording the new album, playing video games, or just lounging around.

When asked about the incident, bassist Rob Kucharek said, “Josh is a sick kid.”

Island Records has reportedly fired the webmaster, although the band’s web site says simply, “I (Josh) am flying home tomorrow so I won’t be in LA with APO anymore.”

Autopilot Off hails from Orange County, New York (40 miles northwest of Manhattan), and built a solid reputation as a hard working touring band before signing to Island Records. The band recently cancelled five shows with Sum 41 in order to finish their album, expected to be release later this year.

For more information on the band, visit autopilotoff.com.