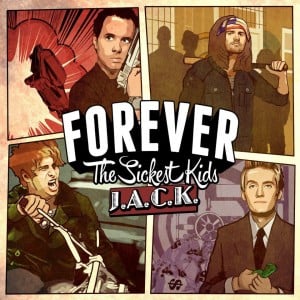 Forever The Sickest Kids will release their new album J.A.C.K. June 25th via Fearless Records. Click the artwork to see it full-sized and listen to a preview of a new song “Chin Up” below!

“We wanted to make a more rock record than ever before, but still have those pop elements that make us Forever The Sickest Kids. We sat down and mapped out a plan for the album, which we’d never done before. We had to figure out how we were going write these songs as the four of us. It’s interesting how tight us four are now. Not just musically but also emotionally and spiritually. We’re one unit. Four strong songwriters still remain in the band and I think that shows in the music.”
-vocalist Jonathan Cook