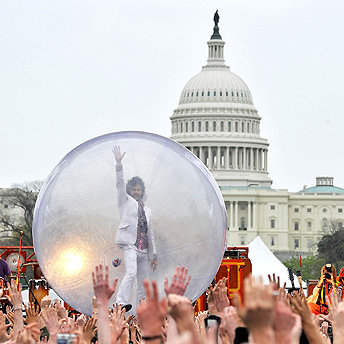 At 4:20 p.m. yesterday, while moe. doodled on a series of winding tunes, those close to the stage at the Earth Day on the Mall concert in Washington, DC, got a glimpse of some unusual items being frantically unloaded: a giant pair of hands, a massive orange ring. There was no mistaking it – the Flaming Lips‘ gear had finally arrived, just 25 minutes before they were due to hit the stage in front of the gleaming Capitol. While techs scrambled, Coyne vamped by chatting with fans and amping up Administrator for the Environmental Protection Agency Lisa Jackson’s speech, waving his giant hands in the background. Just before set time, he enveloped Jackson in a giant-hand hug, in what had to be the oddest photo opp DC has seen in quite some time.

The Lips’ set began just as the day’s first raindrops arrived, but drizzle didn’t prevent Coyne from climbing inside his giant bubble and tumbling out into the crowd, standing triumphant in a little globe as the day focused everyone’s attention on the real one. Coyne sprayed the crowd with confetti as “Race for the Prize” kicked into gear, which was followed by the (thankfully not literal) “Lightning Strikes the Postman.” The set included the Lips’ bloopy, fabulous cover of Madonna’s “Borderline” – released on vinyl as part of Record Store Day – and ended with two of their best-known tracks: “She Don’t Use Jelly” and “Do You Realize??,” the latter of which has its own political significance in Oklahoma, where it was recently proclaimed the official state rock song.

Earlier, Chevy Chase provided alternatively hilarious and awkward banter as he introduced a stream of activists, political leaders and corporate types who consistently reminded the crowd they were members of the “green generation” and pleaded with the thousands in attendance to make small changes in their own behavior for the planet’s greater good. (At one point Chase yelled, “I’d like to introduce you to … the President! Just kidding.”) Los Lobos shouted out East L.A. during a set that included “Angel Dance” and “Bertha,” and DJ Spooky took the opportunity to return Martin Luther King Jr. to the National Mall, spinning bits of his “I Have a Dream Speech” and later Jimi Henrix’s “Star Spangled Banner” over beats and video he had shot during a four-week trip to Antarctica to “make hip-hop out of it.”

Moe. packed their set list with songs ready to get stretched like “Captain America,” which burst into a lengthy solo, and “Kyle’s Song,” which had hippie teens in the front shoeless and carefree. “This is the perfect backdrop for our next song,” bassist Rob Derhak said before they tore into “Tailspin,” the Capitol looming large behind them. Though many speakers doled out thought-provoking messages – from actress Joy Bryant to Hip-Hop Caucus President Rev. Lennox Yearwood, Jr. – and many others overused Obama’s “Yes we can” mantra, Massachusetts Representative Edward Markey, co-author of the American Clean Energy and Security Act, left the crowd with a poignant note to ponder: “After the music has ended, what are you going to do?”