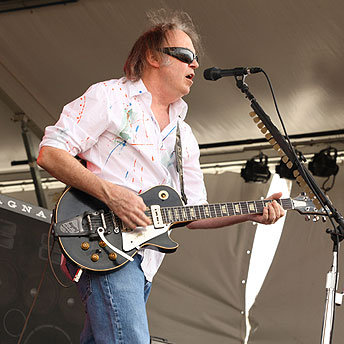 In the weeks leading up to the New Orleans Jazz and Heritage Festival, the recession was the tense undercurrent beneath the excitement over its 40th anniversary. The lineup was announced early this year to extend the ticket-buying season, and other festivals canceled or scaled down. Corporate sponsors Borders, AIG and Southern Comfort withdrew their support.

But any concerns about Jazz Fest’s economic well-being evaporated Saturday when Bon Jovi delivered the second-largest audience in festival history.

The hard rock band was this festival’s cause cÃ©lÃ¨bre, evidence for festival veterans that Jazz Fest is losing its way, trading New Orleans music for “Living on a Prayer,” the set opener. While it will never be mistaken for Bonnie Raitt or the Rebirth Brass Band, Bon Jovi did lean heavily on its current pop country material including “Who Says You Can’t Go Home,” the Grammy-winning duet with Sugarland, a cover of Gary U.S. Bonds’ “New Orleans,” then with “Shout” and “Twist and Shout” to close the show.

Kings of Leon made their Jazz Fest debut this year as well, even as it struggled to put together a set that would fit with the namesake genre of the event.

“We don’t have any jazz songs,” Caleb Followill announced. “We’ll try to jazz things up a bit.”

That meant muscling up the songs from Only by the Night and diminishing Matthew Followill’s atmospheric lead guitar in favor of brother Jared’s fuzzed-out bass. The only hint of funk in “My Party” was a triggered sequencer riff, and the tougher sound made it one of the hardest sets of the festival.

On paper, Ben Harper’s Thursday set promised more conventional Jazz Fest blues rock, but he too added sound and fury with the Restless7. Harper previewed songs from his White Lies for Hard Times, but he sounded stuck between gears, unable to entirely let go of his signature sound.

Since 1990, Jazz Fest has usually closed with the Neville Brothers, and that was the case again this year. But the draw on Sunday was Neil Young, who played a two-hour set before them. Young did not draw Bon Jovi numbers, but he got close, and from the opening crunch of “Love and Only Love,” he riveted the audience with a sound that was noisier than that of Kings of Leon, a lyrical vision as elliptical as Spoon’s, a populist streak as wide as Bon Jovi’s, and a body of work that was firmly situated in Jazz Fest’s roots. Sunday’s version of “Pocahontas” belonged on the electric side of Rust Never Sleeps, and only the lengthy, meandering “Change Your Mind” tested the audience’s attention.

Young visited his recent Fork in the Road for “Get Behind the Wheel” and concluded with a devastating version of the Beatles’ “A Day in the Life.” He replaced the famed final piano chord with an extended guitar freak out, shearing the strings off his guitar and drumming on his pickups with the loose ends. He walked away from the feedback frenzy to a xylophone at the back of the stage, on which he plinked out the final chord one more time before walking away.