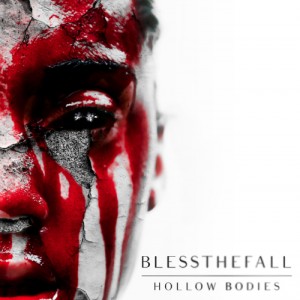 In the midst of their preparation to take on the main stage at this summer’s Vans Warped Tour, blessthefall have revealed the album art and track list for their fourth album Hollow Bodies. Recorded with and produced by Joey Sturgis (Emmure, Crown The Empire, Of Mice & Men), and featuring guest vocals from Jake Luhrs of  August Burns Red,  Jesse Barnett  of  Stick To Your Guns,  and Lights, the record was named Alternative Press’ most anticipated album of 2013. Hollow Bodies will be available for purchase on August 20, 2013, and you can pre-order the album at the Fearless Records merch tent at Warped Tour. Check out what lead singer Beau Bokan has to say about the album and the track list below!

“To say we’re excited about the release of our new record,  Hollow Bodies, is an understatement. This is easily our greatest effort thus far. We have some awesome surprises on this record. Can’t wait for everyone to hear it!”