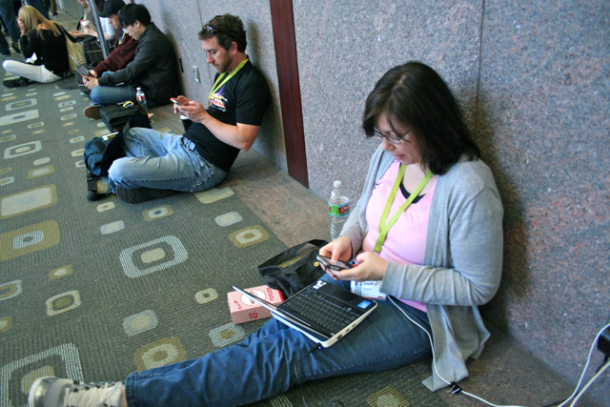 AUSTIN, Texas – For anyone with an iPhone at last year’s South by Southwest Interactive Festival, the memories of slow, or nonexistent, coverage on AT&T’s network are something that will likely last for some time.

After all, at a gathering of thousands of Internet- and communications-dependent geeks, many of whom were toting Apple’s hit smartphone, staying connected, both by phone and over the Internet, wasn’t important; it was crucial.

In the wake of that debacle, AT&T had promised that it would do better at this year’s SXSWi, and in the previous weeks, a slew of articles came out in which the telecommunications giant said things would be fine–that it had identified the problems and taken care of them. In short, the message was, “trust us.”

And now, with as many as 15,000 SXSW attendees, plus many more who are here for the accompanying film festival, and iPhones everywhere you can see, it does appear that AT&T has delivered.

“It seems really good,” said Marc LaSpina, a Web architect from Cleveland. “I haven’t had any problems with it.”

That was the sentiment of Gary Gumanow, a product manager for Dell who lives in Austin. “It’s going pretty well,” Gumanow said, adding that AT&T’s 3G service was performing better for him than the conference-provided Wi-Fi network.

And Nate Parsons, a technology consultant from Washington, D.C., also reported no problems. He recalled that at last year’s SXSW, the iPhone “was pretty much unusable as a phone,” and that it had been “sort of a communications blackout on AT&T.” But this year, he said, “it seems like they’ve really fixed it.”

Parsons said he hasn’t been making too many phone calls, but that text messaging, which is how he’s been communicating with most people while here, has been simple and “just as good as it is back home.”

AT&T KNOWS IT WAS BAD

To its credit, AT&T has not shied away from taking responsibility for last year’s mess. In a phone interview Friday, AT&T spokesman Mark Siegel acknowledged that the “huge amount of traffic” overwhelmed the company’s networks at SXSW 2009. “We learned from last year and have taken even stronger steps” this time around, he said.

“First of all, we’re monitoring the network 24/7 in Austin,” Siegel said, “and so far, we’re seeing pretty good overall performance, and we’ve put a lot of effort [into] preparing for the volume of broadband traffic at SXSW.”

Among the steps Siegel said AT&T took this year were installing a new distributed antenna in the Austin Convention Center in order to boost capacity; expanding the capacity of the network by using 850MHz spectrum that is particularly good, Siegel said, for providing in-building service; deploying two cell sites on wheels (COWs) at the convention center and another one in Austin; and improving and augmenting the backhaul capacity to the sites that support the convention center.

Despite AT&T’s pre-SXSW assurances that its networks would be up to the task of supporting the thousands of iPhone users on hand here, many attendees said they headed to Austin with very low expectations of what they would experience, once they got here.

“I was dubious” about AT&T’s promises of making sure the network would be strong enough, said Parsons. “That’s what they said last year. I was definitely coming prepared for it to be bad, so I was pleasantly surprised.”

Parsons said his preparations involved making more advance plans with friends, and making sure that initial conversations in Austin were about what he and his friends were doing, not more mundane social small talk.

For Gumanow, the first sign that things might not be as bad as he’d feared was when he saw AT&T trucks in downtown Austin last week and found himself asking, “What’s that AT&T truck doing with an antenna up in the air?”

And now that things seem to be going well?

“It’s refreshing not to have to think of a backup plan,” LaSpina said.