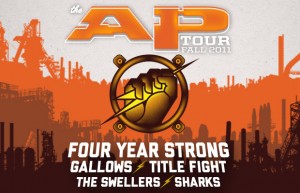 Four Year Strong will headline the third annual AP Fall Tour with support from Gallows, Title Fight, The Swellers, and Sharks. Notably, this will be Gallows’ first tour with their yet-to-be-announced new frontman following the departure of original vocalist Frank Carter. Presale tickets will be available August 1-5 at theaptour.ducatking.com, followed by the general public sale beginning August 6 at 10am. Dates can be found below.