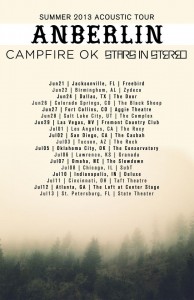 Anberlin will be heading back out on the road this summer, embarking on an acoustic tour much like the one they did last year at this time. They’ll be bringing along Campfire OK and Stars In Stereo with them as well, and tickets go on sale Friday.

We are super pumped to announce that we are taking our acoustic tour (that we did last summer) back out this summer! We had so much fun on the first version of that tour that we decided to bring it out west this June and July. We will be playing a stripped down set, playing songs we haven’t played in a long time, re-working some newer songs, and in general, presenting a unique version of what we do that we don’t get the opportunity to show very often.

Please spread the word, and don’t miss out on these shows as we’re also playing some venues we haven’t been to in a long long time! Tickets go on sale on Friday of this week.