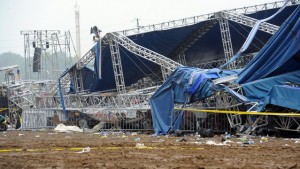 The death toll has risen to five in the stage collapse at the Indiana State Fair in which 45 people were also injured.

The main stage collapsed on a crowd waiting for a Sugarland performance Saturday night at the Indianapolis fair after being blasted by winds as strong as 60 to 70 mph, according to the National Weather Service.

The lead singer of the country band, Jennifer Nettles, expressed her horror in a statement to Associated Press, saying there were “no words to process a moment of this magnitude and gravity.”

The victims were identified by the Marion County coroner’s office as Tammy Vandam, 42, of Wanatah; Glenn Goodrich, 49, of Indianapolis; Alina Bigjohny, 23, of Fort Wayne; Christina Santiago, 29, of Chicago; and Nathan Byrd, 51, of Indianapolis, who died overnight.

WRTV Indianapolis reported Sunday that the number of injured had climbed to 45. The fair was shut down Sunday in the aftermath of the accident.

The accident, which occurred at about 9 p.m. Saturday, unfolded in a dramatic scene captured on a YouTube video. The towering stage equipment tumbled forward onto fans against a backdrop of darkened skies, a massive dust storm and gusty winds.

One woman could be heard saying, “Oh my God, oh my God!”

“It was like it was in slow motion,” concertgoer Amy Weathers told the Indianapolis Star. “You couldn’t believe it was actually happening.”

At local hospitals, triage and family reunification rooms were set up. Shortly after the accident, Sugarland said on Twitter: “We are all right. We are praying for our fans, and the people of Indianapolis. We hope you will join us. They need our strength.”

In the chaos afterward, scores of concertgoers rushed to the stage to lift broken scaffolding and equipment off people.

“People put themselves in jeopardy…and it’s gratifying to know that at a moment’s notice people will jump in to help others,” said Indiana State Police Sgt. Rich Myers.

No one was performing at the time of the collapse.The opening act had finished, and the crowd was waiting for Sugarland to take the stage. At the same time, the weather was worsening; there had been heavy rain and winds were picking up. State police were monitoring radar weather reports on their smartphones.

They had just decided to evacuate the grandstands and were putting officials in place to carry out the plan. But it wasn’t fast enough.