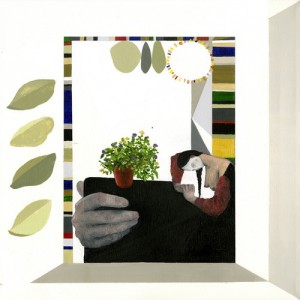 Turnover have steadily been making their way into the current music scene since the release of their EP in 2011, which featured a blustery, rough pop punk sound. Since then, they have found a new home at Run For Cover Records and shaped their music to the likes of fellow labelmates like Seahaven and Daylight. Their debut full-length Magnolia ditches the more youthful sound of their first release, drawing from 90’s emo and punk to create a somber, melodic feel appropriate to the dark themes explored on this album. The band tones it down this time around, relying on melodic riffs, subtle hooks, and poignant lyrics to get the message across.

Opener “Shiver” already makes the band’s new sound apparent. The guitars have less of a blatant attack, but rather roll through their notes in fuzzy layers, molding a sonic nest for the vocals to sit in. Similarly, vocalist Austin Getz smooths out his part as well, crooning in the vein of Joe Boynton and Jesse Lacey. The music is exponentially more subdued but still catchy. It is just much more carefully crafted this time, such as when Getz sings “I can’t help but shiver, shiver / Here without you.” Lead single “Most of the Time” continues the album’s strong opening, kicking the energy up a notch with passionate vocals perfect for a live singalong.

The lyrics play an enormous role in this record. The magnolia flower is known to represent beauty and perseverance, while its bloom announces the arrival of spring. The record metaphorically ties the themes of depression, loss, and human struggle to the magnolia. “Seedwong,” the darkest song on the album, is about a suicide in autumn, while “Bloom” continues playing off the idea of seasons, instilling hope to wait until after winter when the magnolia blooms and life will get better with the warm weather. While some songs try to encourage their listeners, others can be a dose of stark reality. “Wither” tells us that “The hard truth in life is that everyone leaves and everything dies / There is no exception to the passing of time.”

While this album is no doubt powerful, relatable, and at times heart-wrenching, this can cause it to become stifling at times. The tranquil guitars and moody vocals begin blending together on later tracks such as “Hollow” and “To the Bottom” – not to say they aren’t good tracks, but in the scope of listening to the album as a whole, sometimes you feel like you need to take a breather in between. It might have been better to include “Flicker and Fade” earlier on the tracklisting. Entirely acoustic, the song offers a break from the thick guitar layers as well as opting for a brighter, nostalgic theme instead. The album ends on a strong note, however, with “Like a Whisper,” an energetic pop punk tune, and “Daydreaming,” which reminds listeners that it is important not to get stuck in a rut and that change is always possible.

Turnover have come a long way from the spastic energy of their first EP. Magnolia is a probing analysis of the bleak reality of life, perfect for its angst-fueled audience. While the songs on the record do run the risking of sounding overly similar, it only takes a few in-depth listens to appreciate the message the band is trying to convey and the heart in which they deliver it. In the end, this album will serve as a helping hand to anyone who feels dejected, reassuring them that they need only persevere until the magnolia in them blooms to brighter days.