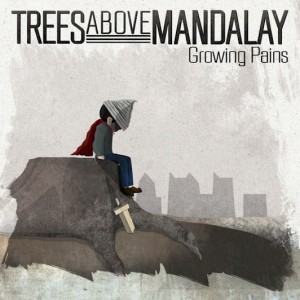 Trees Above Mandalay are a five-piece rock band that have been making music together since 2007 in their hometown of Rockaway, New Jersey. Over the course of their years playing music together, the band have developed their sound into a mature, distinguished style that to has them on the brink of success. The release of their newest EP Growing Pains will make listeners anxious to see the band blossom to their fullest potential, providing a well-rounded and overall entertaining overview of the band’s style, talent, and energy. The EP makes it clear that if the band continues to grow as they have been and are willing to take some more risks and outstretch their boundaries, they will someday be playing a sold-out stadium surrounded by thousands of cheering fans, singing along as an elaborate lights show flashes before them.

Opening number “Everything I Wish I Didn’t Know” has an infectious energy that will catch listeners’ attention immediately. The song makes for a perfect introductory track for the band, showcasing all of the great things about the quartet — David Glynn’s remarkable range (comparable to that of Patrick Stump or Bert McCracken), each member’s relentless energy, the group’s radiating holistic positivity — without becoming too haughty or overpowering. The first single off the EP “I’m Leading, You’re Biting” shows off the same elements as its predecessor, but follows the trend a little too closely. As a single, it works as an overview of what makes the band worth listening to, but as part of the EP as a whole, it has enough musical similarity to its predecessor that it may leave listeners mildly skeptical of the band’s musical range.

But the band redeems themselves moving forward. The incorporation of the piano, however subtle, paired with its classic rock-sounding guitar riffs distinguish “We Felt Like Astronauts” from the previous track. The guitar riffs in “We’ll Sleep Just Fine” and “Nos Compos Mentis” prevail as the most notable elements on the tracks with intoxicating hooks and riffs that you’ll be humming for hours after the record ends. Closing number “As Easy As Breathing” immediately catches listeners’ attention with an introduction drastically different from the rest of the EP. The incorporation of a violin on top of a simple drum beat and piano makes for a much more soothing and relaxing minute-long introduction, in comparison to the high theatric energy that had been maintained to this point. The song slowly progresses to a full-band, heartfelt composition which showcases Glynn’s voice in one of the most passionate lyrical performances on the record. It shows a whole new side to the band and proves that they can be more versatile than they initially let on in their first five tracks.

While the record’s two opening tracks showcase the band’s most memorable qualities and “As Easy As Breathing” proves the band are versatile musicians, the tracks seem to get lost in their resemblance of each other. No song is poorly written or performed, but they lack a distinguishing quality that earns them each their own identity. Growing Pains shows that Trees Above Mandalay have the talent it takes to make it in the music industry, but they will need to take a few more risks to set them apart in the future.