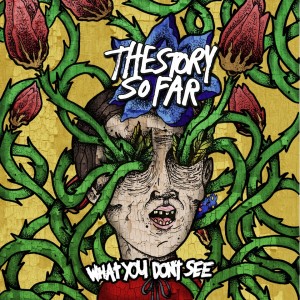 In just over a year, Bay Area quintet The Story So Far have gone from playing basements in California to headlining their own national tour, becoming one of the main components of the Defend Pop Punk movement. Raw and passionate yet highly infectious, their unique brand of hardcore-influenced pop punk adds a fresh new aspect to the genre. Their new full-length What You Don’t See is one of the most anticipated records of 2013, yet fans have no reason to fear a sophomore slump. The Story So Far have returned with another album full of energetic, aggressive songs while still managing to demonstrate growth in their sound.

Opener “Things I Can’t Change” sets the mood for the entire album with the return of the band’s vibrant guitar riffs and and a catchy chorus perfect to sing along to. Yet the band’s sonic growth is also apparent. Production-wise, the mix has gotten even thicker, with enveloping layers of guitars and pounding drums. Drummer Ryan Torf hammers out complex beats utilizing his entire drum set on every song, all at a breakneck pace. Bassist Kelen Capener perfectly complements Torf, forming a steadfast rhythm section. On several songs, such as “All Wrong” and “Face Value,” guitarists William Levy and Kevin Geyer balance chugging chords with melodic lines. Their pop punk virtuosity can also be witnessed on “Small Talk” as they seamlessly transition through chunky riffs, guitar slides, and lyrical lines. Standout track “The Glass” features an instrumental intro reminiscent of Jimi Hendrix.

Overall, the band shifts closer to punk rather than pop on this record. “Stifled” and “Playing the Victim” are short, aggressive slabs of punk rock that relentlessly burst out of the speakers in one blast, foregoing the vocal hooks commonplace on their previous record. Not to be mistaken, the band still implements massive hooks in several of their songs. “Small Talk” includes an immensely enjoyable half-time chorus that will translate well live. The one-two punch of “Right Here” and “Empty Space” will leave fans blown away by some of the band’s best work to date. Both tracks feature catchy choruses and driven, melodic riffs that parallel previous prominent songs, “Roam” and “High Regard.”

Lyrically, the band has matured as well. Their debut served as a giant middle finger, but on What You Don’t See, vocalist Parker Cannon becomes more introspective and sensitive. “Playing the Victim” serves as “Quicksand” Part 2, yet Cannon appears more vulnerable this time around, admitting that he’s “blaming the future on things I fear.” On “All Wrong,” he addresses the emotional stress of tour life and how he misses those left at home, singing “No solace, I miss the fuck out of all my friends / I think back to sleeping on the back bench / Wish I’d let the absence tell them all the things I can’t.”  The band has lost a lot of the anger expressed on the first record, replacing it with thoughtful contemplation. Closer “Framework” is probably the closest the band has ever gotten to a love song. Cannon is honest and self-deprecative, promising, “However long you’ve gone / I will wait.”

The Story So Far move much faster on What You Don’t See, skipping a placeholder and recording only driven, aggressive tracks. While sonically similar to their debut, the band has matured as both musicians and as people. Intensely passionate, honest, and catchy, this album proves that The Story So Far are still a dominating force in the current pop punk scene and will only continue to grow. After the amount of success their debut brought them in 2012, it will be interesting to see what 2013 holds for this promising, young band.