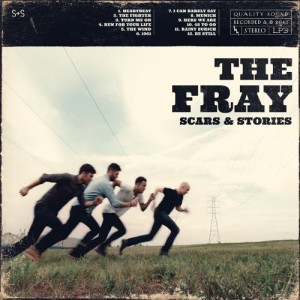 While it may not be a classic, The Fray’s third full-length album Scars & Stories has a song for everyone in every mood. Whether you’re in love, in lust, heartbroken, or totally lost and confused, your new favorite song just might come from the band’s newest release.

While the opening track and first single “Heartbeat” deserves all of the attention it’s been getting, it doesn’t stand out as much as you might expect a single to. Considering the band’s past hits, this is a pop radio track that amounts to nothing more than generic. “The Fighter” is a pleasant surprise that more than makes up for its predecessor; the addicting chorus is sure to make it a new fan favorite.

The third track on the record, “Turn Me On,” is another personal favorite, and without a doubt the edgiest song on the album. The song is definitely unexpected after listening to the first two tracks, but its opening bass riffs, paired with Isaac Slade’s seductive vocals, instantly grab your attention, and the upbeat energy throughout the song make it an instant favorite while showing the band’s more “rock and roll” side. “Run for Your Life” was recently announced as The Fray’s next single, and is a much better picture of what the band can do than “Heartbeat.” The song still screams radio hit but also delivers a message of hope.

Though the next few songs are catchy as well, they fail to stand out from the rest of the album. Nothing’s “bad,” but they’re fairly forgettable. Thankfully the album turns around just in time with closing track “Be Still,” a beautiful arrangement of piano and vocals. What stood out most about this song was its subtle incorporation of the violin in the background. The combination of the music and Slade’s raw vocals draw out the heartrending emotion obviously rooted in the song. The gut-wrenching lyrics are bound to make an impression on any listener, regardless of the opinion you may have held about their previous songs.

Long-time fans of The Fray should definitely consider adding this record to their music collection, although one can’t help but wonder what would happen if the band stepped out of their comfort zone a bit more. “Turn Me On” is a step in the right direction and shows that the band is on the brink of exposing their untapped potential, yet they play it safe for the rest of the album. As is, Scars & Stories is a solid pop record, but who knows what The Fray could have produced had they walked more unexplored paths.