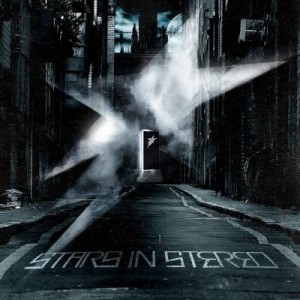 Los Angeles rockers Stars in Stereo are making their debut this year with a self-titled album ridden with strong rock anthems. Though the band only recently formed in 2011, they are bringing rock back to life with upbeat drumming, driven electric guitar chords, and powerful lead vocals. Led by Becca Hollcraft’s impressive singing, the self-titled record brings a different kind of strength to their classic style of rock. Her feminine voice pairs well with the heavier drum and guitar, and manages to belt out some catchy melodies as well.

“Broken” opens the album with a sharp electric guitar riff and Hollcraft’s low and moody vocals. The song, backed by a steady rhythm section and distinct harmonies, is the album’s uniting rally anthem as she cries out the chorus, “I am the strange, the disarranged/ I am possessed, the second-guessed.” Drew Langan’s prominent percussion and the song’s forceful chorus grabs the listeners attention immediately, preparing each for the ride that is Stars In Stereo’s first record.

“Open Your Eyes” starts simpler with Hollcraft’s distinct voice against a synthesized beat and clean piano notes and strings. The harmonies joining in at the end of the verse give the song a dimensional feel that leads into the driven chorus. The guitars don’t enter until the second verse, giving Hollcraft’s voice a chance to shine with a gentle vibrato on this slower but steady track.

“Every Last Thing” begins rhythm-heavy with just a touch of Jordan McGraw’s repeated electric riff playing in the background of the song. The verse builds steadily until the simple but effectively catchy chorus: “It’s not fair/ that I don’t care/ that you’re lonely here/Every last thing we do has a feeling.” The strongest part of the song comes towards the end when the chorus repeats hard. The full band gives their strongest effort in the last sixty seconds, adding a call and response between Hollcraft’s signature voice and the shouting answers of a group, which adds a significant element of strength and variation to the track.

Final track “Queen of Catastrophe” opens beautifully and ends the album with dynamic and powerful emotion. This track features the most relatable lyrics on the record with lines like, “I will take this/ and I will turn this/ And then I’ll fall back down with a shattered heart/ You can’t change me/ and you can’t save me/ watch me walk away as I fall apart.” The album ends on a slightly bittersweet note as Hollcraft’s emotive voice sings about being the queen of making mistakes.

Stars In Stereo bring a simple and true style of rock music back to the table, one that everyone can enjoy. Strong melodies and energetic musicianship from an obviously talented group will see this band go far in the near future. Though this debut features a few predictable melodies and simplistic lyrics, the music and production is solid and holds a lot of potential.