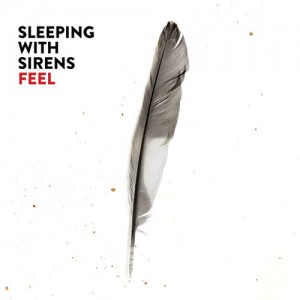 Sleeping With Sirens have exponentially grown in popularity in the past few years with their unique genre-bending mixture of post hardcore, metalcore, and pop rock. On their third album, Feel, the band continues to grow, both sonically and lyrically. In accordance with the album title, the band uses this time to vent on all their feelings these past few years, including anger, sadness, defiance, and triumph. Debuting at #3 on the Billboard charts, this album makes it clear Sleeping With Sirens aren’t just another band in the pop punk/metalcore scene anymore. Amassing a huge fanbase, the band has quickly risen to the top, and the new album exudes their newfound confidence.

The album opens with its title track “Feel,” which immediately serves as proof of the band’s growth. The guitars are loaded with reverb for a stadium-befitting tone and vocalist Kellin Quinn comfortably dominates the forefront with his signature wails. The band feels rejuvenated and excited, serving up another pop rock anthem for the masses as Quinn defiantly sings “I won’t apologize for being different / I can be who I am.” “Free Now” continues the theme of freedom and fearlessness, albeit at a much more personal level, with Quinn mentioning his parents as well as his newborn daughter. While the song risks being a little too preachy, fans will no doubt latch onto the honest lyrics – similar to how “A Trophy Father’s Trophy Son” became a crowd favorite.

There are also a plethora of guest vocals on this album. “Alone” is an extremely catchy track, bolstered by a soaring chorus and a tinge of R&B, yet Machine Gun Kelly’s guest appearance falls flat for me. I tend to dislike rap cameos because they often awkwardly cut off a song’s energy, and Machine Gun Kelly’s just does that. His rapping brings the song to a grinding halt, but luckily drummer Gabe Barham manages to get the song moving again before Quinn picks up where he left off. “I’ll Take You There” proves forgetful with Shayley Bourget (ex-Of Mice & Men) only singing a couple lines that end up being covered by drum rolls. If you start spacing out while listening, “The Best There Ever Was” pulls you right back in however. Featuring Fronz of deathcore band Attila, this is unsurprisingly the most metal song on the album, with a massive bridge that will be thrilling to witness live. “Congratulations” proves to be one of the strongest tracks on the album. With guest vocals from Memphis May Fire vocalist Matty Mullins, I’m surprised this song wasn’t released as the lead single – it had the potential to be the next “King for a Day.” The song features an insanely infectious riff and just the right amount of snarky confidence.

The band slows it down towards the end, showing a more vulnerable side with piano ballad “Sorry.” An emotional apology, the track is very far removed from the confident swagger of the previous tracks. Closer “Satellites” maintains the tempo, but Quinn makes sure to leave his audience with the message that change requires taking action, rather than just leaving it up to fate or chance, with the satellites in the sky equating whatever god you believe in. With Feel, Sleeping With Sirens achieve every band’s goal: releasing a new album that offers something fresh while still retaining the sound their fans fell in love with. They take risks this time around, daring to flaunt their successes while admitting to their failures. Whether your preference is angst-driven metal or poignant pop, this album is sure to leave you feeling something.