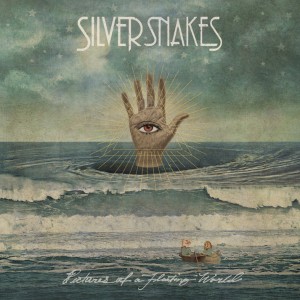 Fresh from the golden state, Silver Snakes are joining a wave of contemporaries, from TouchÃ© Amore to Defeater, who are putting the rock back into punk rock. Their debut album, Pictures of a Floating World, spares us the clichÃ©, over-polished, nasally sound that has been saturating the scene since the ‘90’s ended.  Combining a classic alternative sound with more current post hardcore influences has made for an album that is unique while still offering appeal to fans of many genres. Written with the clear intention to be an album with no gimmicks and produced by Steve Choi of RX Bandits, Pictures of a Floating World is for anyone who likes their rock raw and real.

Album opener “New Light” makes it immediately apparent that the most defining aspect of this album will be its heavy and steady guitars. Paired with the vocals of Alex Estrada, reminiscent of cited influence Walter Schreifels of Quicksand, each song on Pictures of a Floating World demands the attention of the listener just as much as the opener does.

With the melodic elements of Estrada’s voice complementing dreamy, complex drum work and moment-building guitar riffs, Silver Snakes have constructed song after song of music that is as well-defined as it is experimental. While each song is consistent in these elements, the album offers a diverse array of emotion and purposes served. Where “Echo Eyes” is sexy and danceable, “Constant” is dark and angry.

There is no doubt that Pictures of a Floating World succeeds in its attempt to join the revitalization of a genre but its shortcoming may be failing to stand out from other bands who are doing the same. However, while Silver Snakes may not be stuck in your head or have you humming along with just one listen, they do provide an extremely valuable listening experience with longevity. The album doesn’t have a standout track but with each listen the artful intricacies of every last song grow on the listener.

If you’re looking for something new to get nostalgic to, Pictures of a Floating World  is the album for you.  In fact, upon listening to this album, you’ll be left in disbelief that Silver Snakes didn’t rise from the ashes of grunge into the ’90’s alternative scene, but from recent times when carbon cutout so-called punk bands are a dime a dozen.