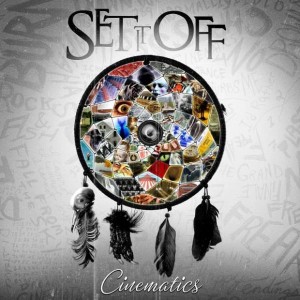 Cinematics, the debut full-length from Tampa-based theatrical pop rockers Set It Off, may be one of the most diverse albums of the year. Having wanted to go for a more orchestral feel, listeners can expect a dramatic sound filled with perfected musical craftsmanship in each track.

The album begins with the 28-second intro track “Thoughts That Breathe,” a large orchestral piece that leads straight into “Nightmare.” Setting the tone for the entire album, the fast-paced track offers heavy drum sequences and lyrically-driven melodies that catch on quickly. Turning from the darker tone of “Nightmare” straight into the pop-driven “Swan Song,” Frontman Cody Carson delivers relatable lyrics like “I’ll admit I’m impressed by your vanishing act / Place your bets on your best guess of when you’re coming back.”

Livening things up with “Plastic Promises,” this upbeat tune makes you want to get up and dance. The catchy trumpet sequence delivered by Dan Clermont, one of the band’s two guitarists, showcases their talent and diversity. The track leads beautifully into Cinematics’ first single “I’ll Sleep When I’m Dead.” With an eerie theatrical opening, this heavier track is filled with frustration with lines like “I’m stuck self-torturing, my meds are failing me / Internal clock in smithereens / Can’t fix this, I’m hopeless.”

Taking a different direction in “No Control,” the peaceful piano opening quickly progresses into a fast-paced track similar to “Nightmare.” Carson details the struggle of not having control over a situation, providing some of the most influential lyrics on the album. Up next is “Dream Catcher,” one of the album’s most elegant songs about the great fulfillment of achieving your goals and appreciating every moment. As a band, Set It Off have had to get through some loopholes to get to where they are today, and this track reflects the positives with a feel-good message. The happiness resonates in Carson’s vocal cues when he sings, “Hit the ground and run with both your feet / Here’s a lesson I hope to teach / Believe you’ll be a dream catcher.”

With a little Panic! At The Disco influence, “Freak Show” focuses on creative guitar riffs and a chorus that is filled with energy. Continuing with the same command, “Distance Disturbs Me” follows the same frustration as “I’ll Sleep When I’m Dead” but this time the focus is on a relationship that has distance locked between. Changing the mood up, Carson sings with pride in “Dad’s Song.” In 2008, the singer lost his father to cancer and this track is a dedication to him. With impressive piano, viola, and trumpet parts, it makes for a simple but heartfelt song.

“I’d Rather Drown” continues to push the envelope when it comes to the hints of anger; in the album’s most blunt chorus, Carson sings, “Burn the bitch down / I never will cross that bridge again.” The album closes with “The Grand Finale,” a track filled with impressive string sections that flood throughout while Carson nonchalantly screams midway — a solid end to a spectacular album.

Set It Off take you for a wild ride on Cinematics, with songs about love, acceptance, heartbreak, and everything in between. There is not one track on this album that fans won’t find relatable. The outstanding vocal delivery of Cody Carson is one to be reckoned with; his powerful melodies and lyrics make you feel connected to each track. Overall, Cinematics is one of the most solid albums of 2012, with an intensity and drama to each track that will have you listening on repeat.