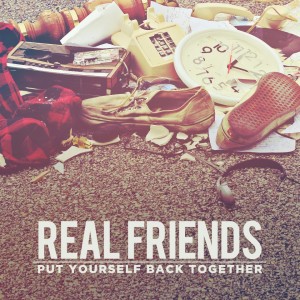 Real Friends are one of those bands who, although their musical repertoire is far from extensive, have yet to put out a bad song. Their passionate, relatable lyrics coupled with their always-infectious energy makes them a generally likable group, and Put Yourself Back Together fits in perfectly alongside the band’s more recent releases. But, that’s exactly the problem. Back in 2011, the band released This Is Honesty, an EP that captured a more mellow, pop rock sound than anything they would release in the future. Fast forward to last year’s Everyone That Dragged You Here, and you’d notice that Real Friends covered a lot of musical ground in just one year, tapping into their angsty pop punk side that earned them a lot of well-deserved attention in the music scene. But Put Yourself Back Together sounds just like that EP – yet it’s been another year. If the angsty, mosh-worthy rage is their niche, then that’s a solid path for them to take, but there’s no sign of the band pushing their limits or trying something new.

While it’s great to see that they’ve held on to the sound that pop punk lovers fell in love with, the band can’t just keep reiterating the same sound and expect the same overwhelmingly positive reaction because it’s not new anymore. They’re relatively new to the music world, and one would hope that the band wouldn’t settle for a sound they developed in just a couple of years of making music. “Late Nights In My Car” hints at a slightly heavier edge, especially lead singer Dan Lambton’s almost-screams toward the bridge, but it’s not enough for you to really call it different from anything the band has already done. The only song that really deviates from the band’s norm is “I’ve Given Up On You,” pairing Lambton’s vocals with a mellow electric guitar to deliver a ballad that makes for one of the most emotional and memorable performances on the record.

Even lyrically this song stood out as one of the most heartfelt and sincere tracks on the record. “Dirty Water” and “Old And All Alone” are noteworthy for their lyrics as well, taking jabs at ex-lovers with lines like “If you wore your personality on your skin, no one would take a second look” and “You wouldn’t know a good thing even if it slapped the makeup right off of your face.” The band’s direct and honest writing style is what set them apart as a group in the first place; if only they had such a noteworthy sound to go with it on this record.

On the other hand, the band had their lyrical disappointments as well. There are three tracks on this EP that reference “bony knees” — “Late Nights In My Car,” “Dead,” and “Lost Boy” — bringing the grand total to five songs over the past year. I get that their fan base is called the Sleepy Eyes and Bony Knees Club, but the constant reference to the phrase is getting kind of old.

Overall, Real Friends sound more cohesive as a group than ever on this record, and they absolutely have the potential to do spectacular things in this music scene in the future. But it’s time for them to reach beyond their boundaries and take more risks going forward.  They said it themselves: “If you don’t break, you’ll never know how to put yourself back together,” so why are they so reluctant to try new things with their music?