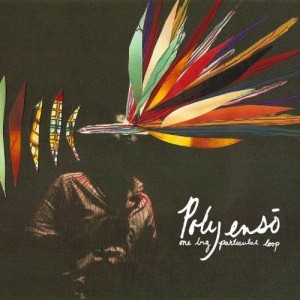 If you remember Oceana, then mentally cross that band name out and scribble in Polyenso instead. Except it’s not quite so simple because with a new name and a recent self-released album, it’s crystal clear that this is not the “post-hardcore” band listeners may have thought they knew before their break. Although One Big Particular Loop may not be a debut album, it certainly introduces a newer, mellower indie sound to the group’s repertoire.

From the first strains of “((O.B.P.L.”, repetitive, haunting horn melodies and cyclical percussion create a steady ebb and flow. The vocals are gentle, almost liquid in their movements, and the overall effect is soothing. A bit of dissonance in the beginning of “Dog Radio” keeps the sound jarring and fresh, but gives way into another silky track based on Brennan Taulbee’s delicate vocals and the same looping instrumental refrains.

The tracks seem to melt together to form one vibrant musical puddle, and it’s very easy to sit back and let the album flow continuously while listening. The consistency between most of the tracks only occasionally lapses into repetitive, which seems like a feat for a thirteen-track album. Notable exception “Danger Signs!” adds a jolt of energy as needed, and the finale “Doom))” provides with its creaking doors and intimate background noises ends the musical journey memorably and perhaps introspectively as well.