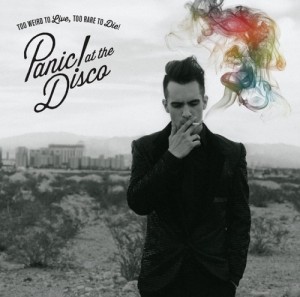 Panic! At The Disco have undergone drastic changes with every album cycle, both voluntary and involuntary, resulting in a distinctively different sound on each album. The move from 2011’s Vices & Virtues to their fourth full-length, Too Weird to Live, Too Rare to Die! somewhat resembles the band’s sonic shift from their debut to Pretty. Odd. Heavily inspired by the band’s hometown of Las Vegas, the new record institutes a lot more electronic elements in order to capture both the glamourous and seedy nature of Sin City. Like Pretty. Odd.‘s reception, while some will enjoy the change and musical exploration, others will frown upon yet another departure from the band’s roots.

The album begins where Vices & Virtues left off with two radio-friendly rock singles. “This is Gospel,” with its soaring hooks and resonant lyrics, is the best song on the album, and arguably one of the best in the band’s entire catalogue. Lead single “Miss Jackson” follows with a fiery anthem that heavily emulates Fall Out Boy’s “My Songs Know What You Did In The Dark.” Unfortunately, these two singles build up anticipation for an enormous record that the rest of the songs are unable to deliver upon. “Vegas Lights” starts off with a child-spoken countdown that runs a little bit too long until a booming synth beat takes over. The electro-pop chorus embodies entering Las Vegas and rolling down the obscenely lit strip. Urie expertly captures the debauchery as he sings, “We’re all not here for nothing / And we’re bored with looking good.” The song is the most appropriate for the record’s concept, but it lacks the attack of the previous two tracks.

From there, the record alternates between big, flashy techno beats or subdued, heavy synths. “Girl That You Love” uses the latter, with a relatively flat contour throughout the entire song. It’s not necessarily bad, just boring. “Nicotine” at least brings the guitars back for a bit as Urie compares love to smoking because obviously no Vegas album is complete without mentioning cigarettes. The album art also utilizes the visual appeal of cigarette smoke (although you’d think they would have realized that marketing to teenagers via “smoking is cool” is becoming a little outdated by now). “Far Too Young To Die” begins with a beat weirdly reminiscent of the Black Eyed Peas, albeit more somber, before layers of synths and vocals pile on top of it. It follows the same direction as “Girl That You Love” but at least adds more of an arc this time around.

“Collar Full” begins to recapture the lacking energy with a catchy chorus and Pete Wentz-worthy lyrics like “If you’re gonna be the death of me / That’s how I wanna go.” The driven guitar riff at the end only acts as a cruel reminder of what’s missing on this record. It’s already the penultimate track though and as the slow, grandiose piano of “The End of All Things” begins, it feels like the entire album has been wasted. The album is pretty much book-ended by its strongest songs. The poignant closing ballad gets rid of the superfluous electronics, somewhat resembling leaving the surreal atmosphere of Vegas and returning to reality. The power and emotion of the song is almost enough to make you forgive the band for the preceding tracks.

Panic! At The Disco have successfully managed to morph their sound so many times before that it’s difficult accepting that their latest attempt, Too Weird To Live, Too Rare To Die!, falls flat. This review isn’t an attack on a band changing their sound or selling out – multiple bands before have successfully transitioned from a punk aesthetic to something much poppier, Fall Out Boy’s Save Rock and Roll being a recent example. In this case, however, most of the songs feel dull and forgetful. The few hits on this album are evident that the band hasn’t lost any of their talent, they just weren’t able to embrace a new direction as well as before. This record isn’t terrible or unlistenable, just disappointing.