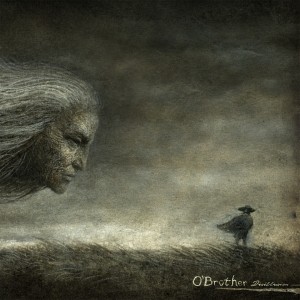 Disillusion is one of the most versatile records of 2013. It’s heavy enough to mosh to, eerie enough to make you cringe, and dynamic enough to always keep you on your toes. O’Brother blend a multitude of genres and experiment with creative instrumentals and arrangements to artfully execute their self-defining sophomore record.

“Come Into the Divide” is a beautiful, yet haunting prelude to “Parasitical.” A steady drum march underscores cavernous, reverb guitars, slowly building until Tanner Merritt’s eerie vocals alternate between a serene falsetto and a doomful half-whisper. “Parasitical” picks up with a steady drum, gritty rhythm guitars, and a lead guitar line that will make any listener feel disoriented and nervous. It provides constant tension as countless layers build and subside, providing a seamless dynamic that carries on into “Context.”

Retaining the same key and aesthetic, “Context” keeps the album flowing perfectly. It is heavier than the previous tracks, primarily sporting sludgy electric guitars, feedback, and distorted bass. It ends in a mean breakdown that foreshadows the edge of “Perilous Love.” This next song begins with a sludgy half-time beat that sounds like a haunting death march. Merritt’s foreboding vocal style gives the track an almost doom metal/goth rock feel. The song stays at a steady pace and ends with an aggressive scream that decays with desperation. “Path of Folly” is a perfect contrast, as it is a little slower and more ambient. It has a nice groove and eerie instruments that make it easy to draw comparisons to Radiohead or Pink Floyd.

“Oblivion” takes on the character of a Muse song, while preserving O’Brother’s distinct tonality. It is the rising action of the album, clocking in at a little over nine minutes. The song shifts from upbeat rock to a dreary atmospheric piece at around three minutes in. It slowly builds to a dramatic and intense climax with wailing vocals, piercing screams, gut-wrenching guitars, and pure eerie dissonance.

“Transience” brings the album’s energy back up with shameless post-metal, while “Disillusion” does its justice as a title track. It shows a more post-rock influence and demonstrates how dynamic this band can be. Ambient textures build gradually for almost three minutes, progressively increasing in intensity. A full band groove kicks in, supported by distorted bass and drums and the hushed whispers of Merritt. The song kicks into overdrive as vocals alternate from aggressive yells to telephonic distortion. It creates a mass wash of chaos, eventually subsiding into the more mellow “Absence,” which sounds like it could be on Pink Floyd’s Dark Side Of the Moon with its noisy intricacies and spacey character. Merritt’s “ahh” vocals are almost demonic. Finally, closing track “Radiance” does a great job fading out the album. Every element of the record is prevalent and slowly decays, providing a beautiful and satisfying catharsis.

Disillusion is a work of art. Every piece melds together perfectly and provides an appropriate part to the whole. O’Brother are brave for bending multiple genres and creating a sound that is both nostalgic and original, and Disillusion will be the record that defines this band’s authenticity and success.