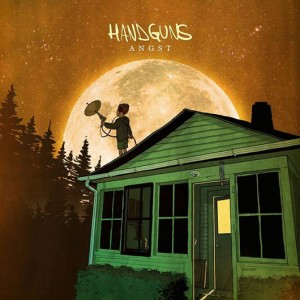 Feelings of discomfort, anger, and regret seem to have washed over the boys in Handguns with their debut full-length, Angst. The anxiety-driven tracks reveal some deep personal issues that the members have been dealing with, giving the listener a sense of connection to these PA boys with each track.

With a punk kick and catchy guitar riffs Angst begins with “Porch Light,” a song reaching out for some acceptance. Vocalist Taylor Eby asks, “What’s it like to know contentment and others feel resentment?” continuing with a plea to leave the porch light on because eventually he’ll be coming home. Not for long though — in “Still Running Away,” he sings about running away and coming back before dawn. Utilizing a play on guitar and lively vocal cues, Eby does a great job creating a fun pop punk number in “Long October.” With hints of New Found Glory influence, the band delivers an impressive upbeat track. Staying true to the same pop punk style, “Stay With Me” explores juvenile high school-esque love — nothing fans haven’t heard before.

In “Early Retirement” they pick back up with a punk style at its finest but an unnecessary talking sequence during the song may cause it to not stick with fans. In contrast, fans will immediately gravitate to “Song About You.” This song is the first time on the album that fans get a chance to hear Eby sing with perfection. With anger and fury he screams, “I’m trying to put the right words together to let you know that I’m leaving forever.” The pounding drums exemplify the rage in his voice and it works tremendously.

Continuing with the anger theme, “Capsize” is a short one-minute track that seems out of place and missing a more developed story. In the song, Eby explores a deep regret that he can’t stomach anymore, comparing the feeling to watching his best friend die. The furious “The War At Home” is the most lonely and empty song on the album with lyrics like “I’ll never forget all the nights that I spent screaming that I want to die.” Angst concludes with “Nice Choice, Nice Life,” an upbeat and true-to-form pop punk song.

Full of anger and personal regrets, Handguns use their debut full-length to get everything off their chests. With creative punk thrills and pop punk driven chord progressions, Angst is sure to make pop punk fans everywhere happy. However, lyrically fans may be disappointed with tracks like “Early Retirement,” “Capsize,” and “Stay With Me”. Album favorites like “Song About You” and “Long October” prove that pop punk’s not dead in 2012. There is a lot of growth to come for these PA newcomers and fans will appreciate how open Handguns are with Angst.