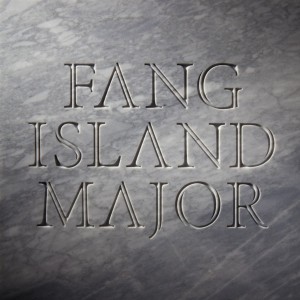 Fang Island’s newly-released Major hovers somewhere between anthemic rock and gentle indie music, never quite defining itself strongly as any particular genre. It also lives firmly in a mid-tempo realm where songs blend into each other with little distinction. The result is an album that simply slides over the senses, leaving a vague impression but failing to pack enough power to warrant repeated plays.

Wailing guitar riffs steal the focus throughout the course of the album, but first track “Kindergarten” rests on a plunking piano background. This carefree piano melody combined with gentle group vocals and major chord progressions gets the album off to an intriguing start. Immediately after, both “Sisterly” and “Seek It Out” offer smooth guitar-based melodies which never waver above an average energy level. The result is a lull in the album until “Make Me” and “Never Understand” pick up the energy with catchy call-and-response chants and more driving percussive flair.

However, parts of the album reside in a haze of repetition and slightly forgetful mundanity. The interplay between bouncy vocals and guitar can only go so far before certain songs, like “Chomper” and “Regalia,” start to sound nearly identical to one another in tempo and style. “Victorinian” breaks the monotony with a return to the heartfelt piano heard earlier, reminiscent of a music box, to close the album with sappy refrains that will leave the listener’s spirits light if they can make it through the entire 5:48 of the song.

Overall, the album is pleasant but may not make a lasting impression on listeners. While there is no negativity to be found within the floating instrumental riffs and lulling vocals of Major, it seems to lack any guttural stir or genuine musical connection.