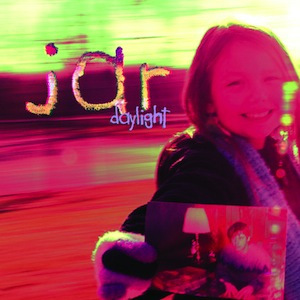 Nostalgia is an understatement. Grunge is alive, the 90’s are back, and we can thank Doylestown, Pennsylvania for breeding bands like Daylight (although Kurt Cobain may be rolling over in his grave at this point). After releasing a few solid EP’s that teetered between emo and hardcore, Daylight have debuted their first LP Jar, defining their shamelessly 90’s alt-inspired sound.

It’s evident from the opening track “Sponge” that Daylight are finally in their comfort zone. The song begins with a confident rock beat, heavy and proud, as a fuzzy, distorted guitar locks right in, building up to a full band powerhouse – reminiscent of the heavier moments of Nirvana’s “Come As You Are.” The vocals are strained and raspy, the lyrics are self-deprecating, and the overall mood is melancholy, leaving listeners feeling both unsettled and emotionally relieved.

The semi-title track “Life In A Jar” is the best representation of the album as a whole. The drums often take the lead on the record and dictate what the rest of the band will play – a dynamic that is likely expected of an alt rock band. The track begins with a heavy-hitting beat a la Dave Grohl, but could also be mistaken for Fall Out Boy’s “Sugar We’re Goin’ Down” if the screeching noise and feedback were not so apparent. Sonic Youth would be proud. The song builds into heavy power chords and string bends, tastefully combining grunge and hardcore. The verse features palm-muted guitar chugs and breathy, eerie vocals that contrast the full-blown screams in the chorus. The song escalates to a two-step bridge with a lazy guitar lead, naturally drenched in a chorus effect. It ends with a final chorus that hits hard and makes you feel depleted and angry – in a good way.

“Sheltered” is Daylight’s most upbeat, catchy tune on the album, but although it may have infectious hooks, it is so inherently Foo Fighters-inspired that it can edge on boring. The vocal harmonies are probably the only new element that distinguishes this track from any others on the record. “Crawl” and “Knew” follow the same trends as well, incorporating catchy vocal hooks over fuzzy power chords and over-indulgent drums. At this point in the album, the songs seemed to be getting shorter and more monotonous, all sounding more or less the same.

“Youngest Daughter” revives the album with its chorus-infused guitars and spacious drums. The verses are almost empty with the exception of desperate, heart-wrenching vocal lines like, “It’s useless, I tried but to no avail / To tell you how much I know, how much I care.” The song is slow and haunting, yet powerful and passionate.

The album ends with “Around The Railing,” another homage to the 90’s alt sound. Frontman Taylor Madison’s vocals are so close to Kurt Cobain’s it’s frightening. Although this track is not particularly distinct from the rest, it embodies the evident grunge spirit of the album and ends on a heavy, desperate note.

Jar proves that Daylight can revive a sound that was popular over two decades ago and execute it well in the contemporary world. However, I worry that this album lacks the authenticity that can be heard on the band’s previous releases. If Daylight want to avoid the inevitable Nirvana, Foo Fighters, and Soundgarden comparisons, they must find a way to incorporate more original elements into the mix. Nonetheless, Jar is a solid alt rock record that will garner Daylight further notoriety.