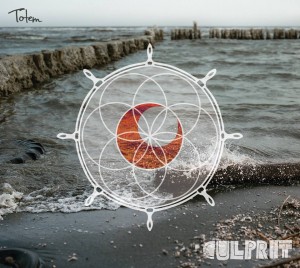 Los Angeles up-and-comers Culprit are still relatively under the radar, but that’s not something that will last much longer. The four-piece has poured effort and honesty into their latest EP Totem, proving their talent musically on every track with dynamics and powerful lyrics to make the listener grasp the emotion in each verse. It’s honestly hard to believe that Totem is only their second release. Despite Culprit’s freshman status, the band is delivering their A-game without a doubt and are sure to make serious headway in the future.

Leading the EP is title track “Totem.” The opening line, “We’ve never seen in light of all these years / That the only thing in our way are our fears,” catches attention with a bit of lyrical wisdom before diving into a few bars of beautiful rhythmic instrumentals. Guitarist Brian Fulda sets the mood with sharp and clear riffs that comfortably collide with vocalist/guitarist Travis Powell’s moody chords, which flow easily throughout the EP. “Supply and Command” starts with some heavier guitar, but adeptly changes from loud to calm and back again. Powell shows off some powerful vocals in the final repetition of the chorus before the song ends abruptly with him declaring, “I can’t throw my punches anymore.”

However, Powell truly shines vocally in “Knock on the Sky”, which features an intense shift in dynamics throughout the track. Easing you in to the song are the staccato guitars and dragged out vocals of the verse and the heavier chorus, while enticing lyrics simply roll of Powell’s tongue with lines like, “The consistent inconsistency turns into insecurity under the shroud of self-doubt.” The song builds up further until Powell brings out a surprisingly forceful scream, which then bleeds into a soft, almost mumble of words. The contrast in volume and style shows Culprit’s rougher edges, which prove just as captivating.

The EP continues more or less along the same lines, with an edgy ebb and flow of dynamic throughout. “No More” takes on a sultrier sound from the low pulse of the rhythm section, while “Bodies Divided” remains one of the steadier, slightly more relaxed tracks. Touching on a lyrical theme of inadequacy is “We’re To Blame”. Powell’s chorus, “We’re to blame/ for what we couldn’t see/ and all the things that we just couldn’t be,” makes it seem like blame is being placed simply for not being good enough, but he sings of overcoming the shortfalls later with the more uplifting lines, “It goes to show that this wasn’t just a waste of time/ We’ll show them what we’re made of.”

“Piece of Eden” closes the EP as a concept song that features elements of mystery in the lyrics, Powell’s unique voice that catches in all the right places, and beautiful musicianship that weaves within the story artfully with every carefully thought out note. The dark, shadowy imagery makes this song somewhat haunting, The memorable line, “We move through clouded spaces” really ties this song together as it repeats throughout the chorus to describe a secretive, unnamed group. Powell has noted that the concept describes a battle between good and evil, a story of mysterious groups that are possibly trying to save the world from themselves.

With Totem, Culprit show off not only an obvious talent but a craft in their music. The lyrics aren’t entirely complex but tell stories with a clever use of vocabulary and Powell’s voice bringing feeling to the words. What’s more impressive is the sheer quality of musicianship and production present on the EP. Each note and chord is played with clear precision. Their sound is unique and genuine and the band has shown true potential since their debut EP Analogue. As with that EP, Culprit still leave something to be desired — like a full-length — after this tantalizing release. Totem only compounds upon their talent and proves that Culprit have true potential for longevity.