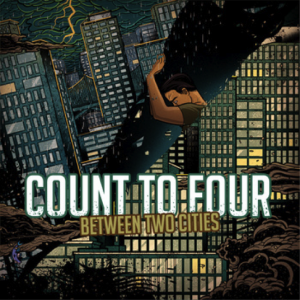 If there is one theme that is sure to make a hit summer record, it is the idea of growing up. As schools break for summer and graduates don their caps and gowns, the sense of the freedom of getting older suddenly hits. Cue in Count To Four and their debut full-length album, Between Two Cities. The record begs to be listened to on a hot summer night, with the windows down and the stereo loud, all caution thrown to the wind.

The record has some of your typical pop punk fare, with its catchy guitar riffs, fast and hard drum fills, and simple vocal harmonies. Between Two Cities is reminiscent of Jimmy Eat World’s Bleed American mixed with All Time Low’s So Wrong It’s Right. The album contains all the necessary raw, honest emotion of a pop punk record while remaining clean and polished. It is clear the band cares greatly for not only the feel of the record, but also their musicianship.

Between Two Cities is full of sure-to-be summer hits. The opening track “Hope Not” captures the all-too-relatable feeling of listless youth and constantly waiting for the right time to say what needs to be said. The following track, “Lavender Town,” borrows from the Blink-182 self-deprecating lyrical style at the start of the song, with vocalist Mike Hayden singing, “Well I’m a dick, I gave you hell.” The rest of the song, however, is exceedingly more mature than that lyric alone would have you believe. The ending of this track, with its repeating chorus of “stay strong,” delivered a personal favorite moment off the record.

While some of the album does get a bit repetitive and can be a bit too typical sounding of a standard pop punk record at times, it certainly has its shining moments. The lyric, “Because growing up was just practice, it’s the life thereafter that’s the test,” from the track “You Got Your Woody Allen In My Gerard Butler” comes to mind, for example. The song “Tear It Apart” is a bit darker than other songs off the album, adding a realistic element. As we all know, growing up has its low points, and with songs like “Tear It Apart” and “Good Days Pt. II,” Count To Four have made sure to capture that not only in sound, but in the lyrics.

Overall, Between Two Cities is sure to please lovers of pop punk everywhere. The record, though slightly monotonous at times, is chock full of emotion. It is clear that Count To Four truly love the music they make, and when that’s the case, it is hard not to enjoy listening to it.