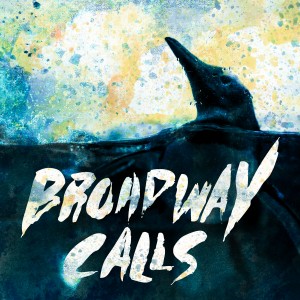 Broadway Calls seem to have had a dream career: they caught the attention of Green Day’s Billie Joe Armstrong back in 2008, they have been constantly touring since 2005, and they have released 2 EPs and 2 LPs, with each album improving upon its predecessor. Yet for all their success, they have never really been in the spotlight, usually stuck in the opening slot or headlining small clubs. They remain a staple of the pop punk scene, however, teaming up with Descendents drummer and producer Bill Stevenson again to record their third full-length, Comfort/Distraction. This album is yet another victory for a hard-working, do-it-yourself band who refuse to ever give up.

The album blasts out of the gate with the aptly-titled “Bring on the Storm.” Stevenson has beefed up on production, thickening every instrument so that the sound pretty much swallows you whole. Vocalist Ty Vaughn is stronger than ever, sounding like a grittier mix between Billie Joe Armstrong and New Found Glory’s Jordan Pundik. A suitable opener, “Bring on the Storm” features the best of Broadway Calls: driven guitar riffs, a catchy chorus, and empowering lyrics. “Open Letter” continues the trend of fast-paced punk with a relentless bass propelling the track. One of the most honest songs on the record, “Minus One” is sure to appeal to Broadway Calls’ more sensitive fans as Vaughn sings about saving an alcoholic girlfriend.

Lead single “Lucky Lighter” is undoubtedly the catchiest track on the record and definitely one of the best songs this band has written. The chorus guarantees singalongs as Vaughn belts out, “My wishing well has gone dry now / I stay up and I stay high.” “Surrounded by Ghosts” is a mid-tempo tribute to Green Day’s older albums, with the bass once again carrying the majority of the song. One aspect I love about this record is that the bass guitar, an instrument increasingly ignored in modern music, plays a major role in the entire album; no member of the band was left behind during production.

“Zombie World” and “Stealing Sailboats” are both about overcoming opposition in a world where everyone is against you, the latter being an extended full-band version of an acoustic demo from the band’s Toxic Kids EP. Both songs are guaranteed to become anthems of a teenage generation determined to escape the monotony of modern life. “Wildly Swinging” is an interesting sample of the band’s musicianship as they seamlessly blend a “wildly swinging” tempo change between the verses and choruses. Album closer “Full of Hope” serves as an inspiring sequel to “Zombie World” with the message that even though humanity is flawed (“we’re all greedy fucks”), we have the ability to build a better future.

Broadway Calls haven’t reinvented the pop punk wheel or anything with Comfort/Distraction, but they have released yet another solid album bereft of any fillers. Every song is unique and irresistibly catchy with inspiring yet reassuring lyrics sure to speak to a generation facing adversity in the modern world. Hopefully this album will earn Broadway Calls the attention they deserve because if you love pop punk, you will love this album.