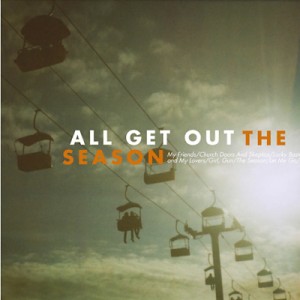 The Season, the debut full-length from Charleston, SC’s All Get Out, is a record dripping with honesty from every pore. Released at the end of last year on Favorite Gentleman Records, The Season seems like something that would fit in very well with the likes of Manchester Orchestra, O’Brother, or Kevin Devine. Having started touring back in 2007, All Get Out know a thing or two about life on the road, and this theme shines through the stories told on each song.

The Season kicks off with the rocking “My Friends,” with vocalist Nathan Hussey singing “my friends don’t cry / They tuck it in and then they drink at night” over a wall of instruments that sounds like it could fill an arena. The stand-out track on the album is the third song, “Lucky Bastard.” The common theme of the toils that touring takes on the soul is ever-prevalent, with hard-hitting lyrics such as “I really do always want more / On the road all I want is a warm home.” The chorus is where the track truly shines, encompassing a catchiness that will ensure the song is stuck in your head for days.

Lyrics on “Son of Mine” describe life on the road as well, which isn’t all fun and games, as evidenced by the lines “Please let me go home if it still exists / If it can be found, I’ll start making my list of things to change / Hell, I could rearrange.” A clear back and forth between the joys of being on the road with your best friends but a longing for home is seen throughout the album.

One of the slower tracks, “Let Me Go,” is brimming with emotion as the song builds from vocals and light keys to the crescendo of the full band coming in. Over the span of the last six minutes of the album, with “Let Me Go” smoothly continuing into the closer “Come and Gone,” All Get Out take you through a beautiful and dynamic musical journey that ends with rich and elegant strings.

Clocking in at a short but sweet forty minutes, All Get Out have created an incredible album that should not be overlooked by fans of Manchester Orchestra or Brand New. Deeply honest and powerful, it is one of the strongest debut albums to have been released in 2011 and is sure to find a place in your heart too.

The Season can be purchased on Bandcamp here.