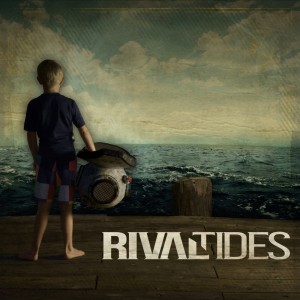 For being such a young band, Rival Tides have come very far already. The Los Angeles-based five-piece put out a seven song EP last month that defies all expectations for a band that only formed a year ago. The music is distinct, catchy, and high quality, especially given that the self-titled debut effort was recorded with Erik Von (I The Mighty, Panic! At The Disco). Despite the solidity of the EP, the tracks can become generic and repetitive; even so, the release is entirely enjoyable and serves as a strong starting block in the band’s career.

The EP jumps right into its edgy, alt-rock sound with “My Insomnia.” Vocalist Robyn August delivers an energetic verse and chorus: “I can’t wake up to my insomnia/ I’ve been sleeping in my dreams, and dreaming in reality/ And I can’t wake up.” Starting strong with the lightly strumming lead guitar and August’s smooth, breathy vocals, “Maybe” is a dynamic song that crescendos easily into a forceful chorus. Backed by a vigorous rhythm section, the song takes a strong turn when August cuts the tension with a rougher vocal style that is showcased well on this track.

In “Out of Body,” clear, high-pitched lead guitars produce an ethereal feeling that exemplifies its title. August sings a dark, moodier verse that contrasts with the sharper chorus. The musical strength is coupled with pointed lyrics, like the lines, “I am not a stranger to all that comes at a cost/ And I’m patiently waiting/ We are not strangers, no, I think we’re just lost.”

“Gold” stays upbeat and melodic throughout. The song takes its title from the powerful line “You are gold, more than they will ever know/ You are gold, now’s the time to let it show,” keeping the message positive as well. Musically, “Gold” is forceful and rhythm-driven, thanks to heavy drumming from Greg Fulleman that is prominent over the entire track. The EP is bookended with its strongest tracks, starting with “My Insomnia” and “Maybe” and closing with “Oceans.” The final track combines watery metaphor, message-driven lyrics, and seamless musicianship.

With their self-titled debut, Rival Tides prove that they are fully capable of creating solid melodies with tangible strength and dynamic. Their only downfall perhaps lies in being a too typical brand of rock. The band’s talent is apparent on their debut EP, but at times lacks a memorable quality. Nevertheless, the EP is a strong start for the band and shows that Rival Tides is not a group to let slip under your radar.