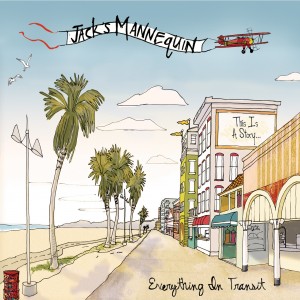 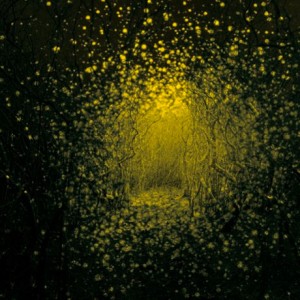 We’re excited to unveil another new idobi column, Double Take. In this bi-weekly editorial, idobi writer Marina Oliver explores the subtle connections between two musical concepts from different moments in time, finding the threads that tie the two together. For the column’s debut, we delve into two quintessential summer albums that are musically different from one another but turn out to have a lot in common: Jack’s Mannequin’s Everything In Transit and The Antlers’ Burst Apart.

For someone who doesn’t enjoy summer all that much, I tend to catalogue it in my memory by weaving threads of rich nostalgia into the narrative of those three months. During high school, the season mostly consisted of wondering why I wasn’t having the time of my life or creating a plethora of Polaroid-worthy youthful moments; instead I’d find myself watching Almost Famous for the sixteenth time and driving to Taco Bell at 2 a.m. with the same friends I’d been wasting nights with since middle school. Basically what I’m saying is that every year, it became easier to begrudgingly comprehend that life is often nothing like a tearjerker coming-of-age movie.

After twenty-one years of existence, though, I’m still not ready to accept this fact. To cope, I’ve amassed a compilation of all the preceding summers into a hipster wet dream of a mental film reel replete with filtered sunsets (not Kelvin, though) and all the people I might have become close with if only we’d had more than three fleeting months. You get the drift. Someone in Hollywood should contact me to artistically collaborate on all “we’ll never die / we have one more night” music videos and/or movie trailers.

Soundtrack-wise, nothing sticks out to me more than Jack’s Mannequin’s Everything In Transit to vividly illustrate all the feelings of endings and mourning that accompany the last few weeks of August. In addition, although sonically very different, The Antlers’ Burst Apart seeps into the same spaces filled by Everything In Transit, proving that these ephemeral feelings transcend genre, time period, and even age. How else could two albums, one packed with Andrew McMahon’s punchy piano hooks and crystal clear crooning, the other murky, elusive as Peter Silberman himself and full of chosen silences, elicit similar sensations? Everything In Transit spoke to me when I was fifteen years old as much as it does now, while Burst Apart reminds me of just last summer. I changed immensely as a person during those six years, and yet have never been able to loosen my grip on exactly how August hurts as it’s happening. Thus, it’s necessary to have a few albums on hand to augment the feeling when it occurs, and despite their differences, these two usually do the trick.

Everything In Transit is full of classics like “Dark Blue” and “The Mixed Tape,” obviously, but in its entirety, the album perfectly encapsulates the balance between the mundane (“I wake up to find it’s another four-aspirin morning, and I dive in / I put on the same clothes I wore yesterday”) and the special melancholy of saying goodbye to anything – a time period, a person, a former self. “Bruised” drips with lyrics highlighting the bittersweet struggle between the relief and pain of accepting reality and moving on. The literal setting of the airport makes me think of the summer I flew to California and woke up as we drove along the coast, headphones in ear, Everything In Transit seeming to understand exactly how it felt to say goodbye to sunburn, to freckles, to freedom, to imaginary summer flings, to the hypothetical nature of the future. The song speaks to the impossibility of removing oneself from a mental state even with physical or spatial distance, and therein rests the premise of my nostalgia. You can take the girl out of the summers, but you can’t really extract the mingled feelings of anticipation, regret, being stuck and tripping forward at the same time, and trying to grasp these details tightly as tiny indicators of how a certain period in time felt against my skin.

Six years after Everything In Transit graced the world with its presence, a different album with a strangely similar feeling of finality emerged from a very different type of band: The Antlers’ Burst Apart. If this article were formatted as a Venn Diagram, there would undoubtedly be many qualities in the outermost circles; Everything In Transit packs the punch of the earlier 2000’s and offers grit for more blatant angst to reside. It’d be more of a hit on Warped than at Bonnaroo or Lollapalooza where one can catch The Antlers, so yeah, we’re talking a different scene here. Nonetheless, I find myself reaching for both the CD’s (I’m a sucker for physical media, no matter how inconvenient and cluttered it makes the passenger seat of my car) as August begins to fade out, and I believe this quality links the albums in a certain inextricable way. Burst Apart fills itself with gentle endings, laments for the past, and connectivity with the environment and with others. Whereas Everything In Transit tends to flame, Burst Apart simmers gently underneath the surface of a real outcry despite the title. Silberman’s lyrics nearly always manage to encapsulate angst in the most poetic manner possible: “You and I, divine but not devout / every night my teeth are falling out.” The imagery of teeth falling out always makes me think about the little pieces of ourselves we always lose as we grow up. Somehow, summer always manages to catalyze this process, and I feel like I grow twice as fast during season along with the plants. The album uses plenty of burn imagery to get its point across, like in “Corsicana” when the lines “We lost our chance to run / now the door’s too hot to touch” feel like the epitome of nostalgia and regret. The album manages to speak to growing up, the intricacies of intimacy, and general existential malaise all in one, which is why for me it feels like a mature extension of the same elements expressed with a twist in Everything In Transit.

It may be September, but I think it’s fair to allow ourselves a few weeks of a processing period for summer to unabashedly revel in the media that helps us merge the seasons together. Going to California at 17 and listening to Everything In Transit felt remarkably similar to my impromptu trip to LA last month at 21 in the sense that everything felt so incredibly vibrant and sensitive in the way that only an overblown summer experience can. The narratives laid out in Everything In Transit still apply, even though I’ve grown up since the album first reached out and spoke to me. This August was the first time I’d ever bought a plane ticket in the spur of the moment to take a major chance on someone I thought could be very important in my future. Try to tell me that hearing McMahon gasp, “I’m slipping into the airwaves / And this is nothing new, you are slipping through / My fingers and into the airwaves,” as you see the patchwork quilt of LA at night from the window seat of the plane wouldn’t send chills down your spine. Long story short: I’ll never regret the trip but it wasn’t necessarily a fairytale reunion by any means, so on the way home, MFEO Pt. 2 spoke volumes to me (“Is it possible for the world to look this way forever? / And maybe, we were made for each other / You can breathe but the air is running out”). The beginning and ending arcs of human relationships often tend to mirror those of time, so it’s no wonder that this album played in integral part during both of my California trips. Similarly, I can remember the swell of emotion that rose up in me when I saw The Antlers live on the hottest day of Bonnaroo last June, the absolute stillness of the air as they crooned about inevitable endings and tentative beginnings. The live rendition of “I Don’t Want Love” blanketed the audience in a reverent hush, and tears painted the cheeks of more than one adult concertgoer.

Some albums feel like closing a book, setting it down, and allowing yourself to be haunted by what you just experienced, as well as ultimately letting it shape you. Both Everything In Transit and Burst Apart serve this function in making sense of my life in an artful way. They make the perfect background tracks for that imaginary lo-fi indie movie trailer I was talking about earlier; when they come on, it’s so easy and necessary to tie them to an exact time period when they meant something, and all the subsequent times they continued to mean something. Without that, summer might just be a string of late night drives or lying on the trampoline bemoaning not living closer to a city or anything exciting. By using these albums as tools to frame the past, present, and even the future (even though I’m scared to think about that) it infuses a specific associated meaning into the gains and losses that eventually shape you into your ultimate self.