Music and art go hand in hand—and The Maine intertwine the two seamlessly. Because it’s not just the sound that draws you in; it’s their visuals too. They’re well-known for their instantly recognizable aesthetics, DIY art and merch, and ever-evolving style, showcasing it in some unusual and interesting ways. And with the band turning ten this year, there’s been a lot of creativity for us fans to enjoy—so sit back and immerse yourself in some of the visual art from The Maine experience all over again.

“It all started with John,” The Maine photographer Dirk Mai said of creating Pioneer’s album cover. “He told me he had this idea of a big, burly, bearded man on the cover with bright red lipstick on.” Dirk did a test shot of his friend using $5 lipstick, and it ended up being the album cover. “It was just one of those shots you couldn’t recreate.” And you can’t argue with that—there’s something enthralling about the album cover, like you’re never quite sure why it works with the album’s sound, but it truly does. They’ve become known for their unique album covers; which brings us to The Good Love: with its trippy, painted take on Pioneer’s cover, the songs have a “party” feel to them too—they’re more relaxed, slightly more rock n’ roll. I remember being drawn to the CD’s cover at their merch table immediately, picking it up before I’d heard any of the songs because I simply needed to own this piece of art.

Forever Halloween is one of my all-time favorite album covers. Something about the “bare-bones” exposure of the skeletons, the contrast of black and white, and the dark water swirling around that gets my mind racing. Each band member had a skeleton mask painted on and then laid in a pool of inky black water before being photographed from above. It fits the Forever Halloween era: the band recorded the album live on analog tape—so what you hear is what you get. The art and record together show the band as who they really are—when you take away the expectations, the pressure, the preconceptions; where you see the dark and the light, and the good in both.

American Candy:
You Are Watching a Band Called The Maine

This era deserves its own section, just because the music, album art, and everything in its marketing campaign is one of the most memorable and effective aesthetics a band has ever come up with. Who could forget seeing the “You are watching a band called The Maine” banners in every Warped Tour ’16 photo, or their “Why would you pay money to meet a human being?” signs taking shots at celebrity culture. I can’t look at that shade of blue or chew on some bubblegum any more without thinking of The Maine.

Ahh, the famous M wall. This is the piece that launched a thousand notebook doodles for kids everywhere, trying (and usually failing, on my part at least) to get the band’s logo right. The Maine have lyrics that make you want to scribble on your converse or walls (or on the band’s tour van), and the logo just adds to that. This is where I really started to notice The Maine’s sense of community everything they create; the M wall became a feature, a sacred ground and piece of history from The Maine’s past that fans wanted to visit long after it was painted over. Marking a piece of their hometown of Phoenix as their own showed me the importance of remembering your roots—something The Maine have reminded me of time and time again.

So simple, yet so effective. Need I say more on where they got the inspiration? (No really, don’t make me talk about it.) Okay, okay, not exactly art in the standard sense, but its commentary on society pushes it into that arena—and who said you couldn’t wear #art on your head? I only wish it’d had been a real campaign, but it got a lot of us talking about important issues (and I don’t mean emo), which is what great art should inspire. So cynical. The best satire EVER. People keep trying to imitate them but they always fail. Fake merch. SAD!

Not to Mention the Rest of their Merch, Too. 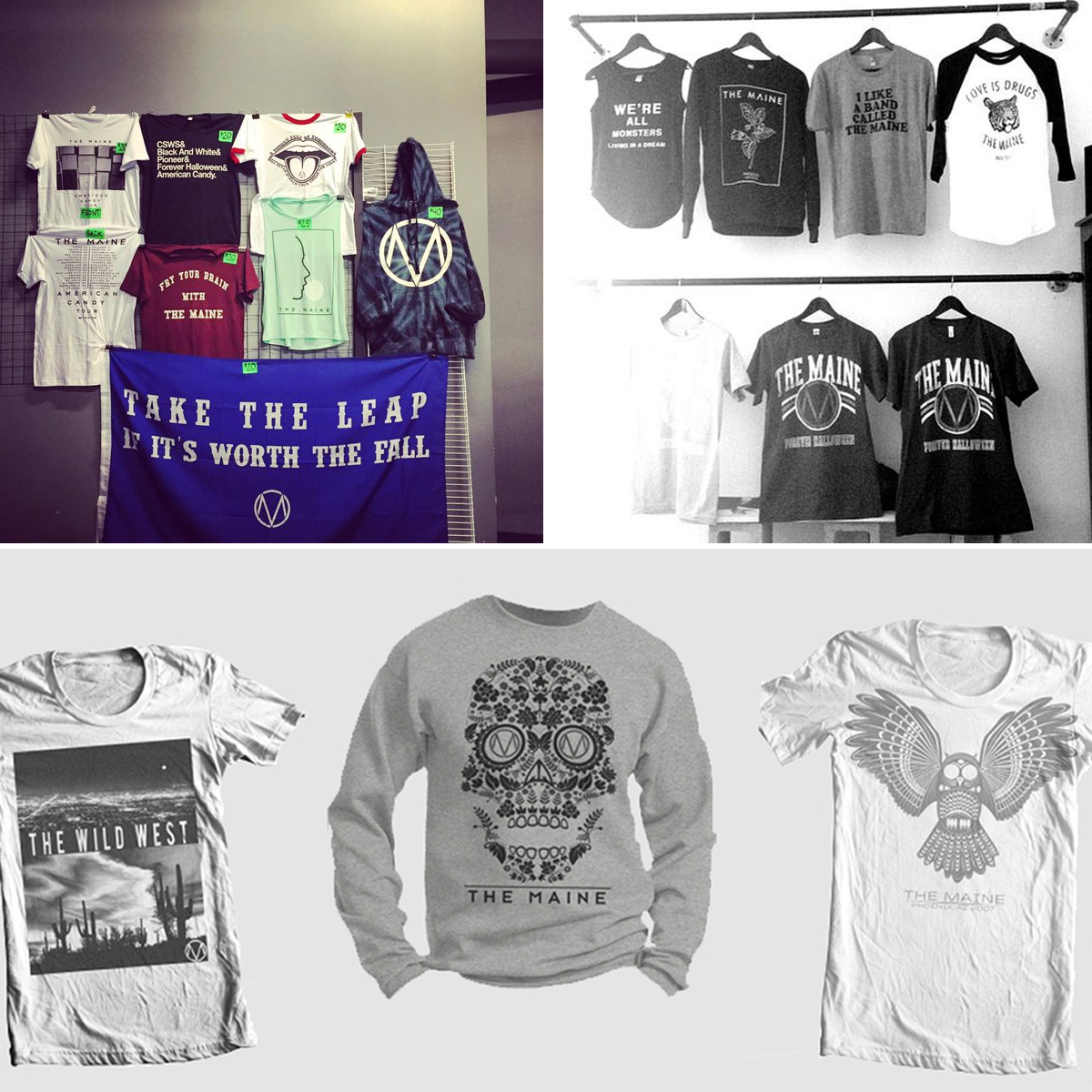 Is it just me, or is band merch often kinda lame? The tees don’t fit right, and the designs are luminous and overly…for lack of a better word, touristy? Well, not The Maine. Over the years they’ve developed some designs you’d actually want to show off—from prints, to flags, to cool pieces of art and ironic slogans on shirts. Ranging from simple and clean designs, to intricate patterned ones, to photographic tees, they’ve created wearable art that doesn’t always scream “band merch”, which shows off their eye for creativity.

We’ll even forgive the fur on those converse, because they still look pretty damn cool. 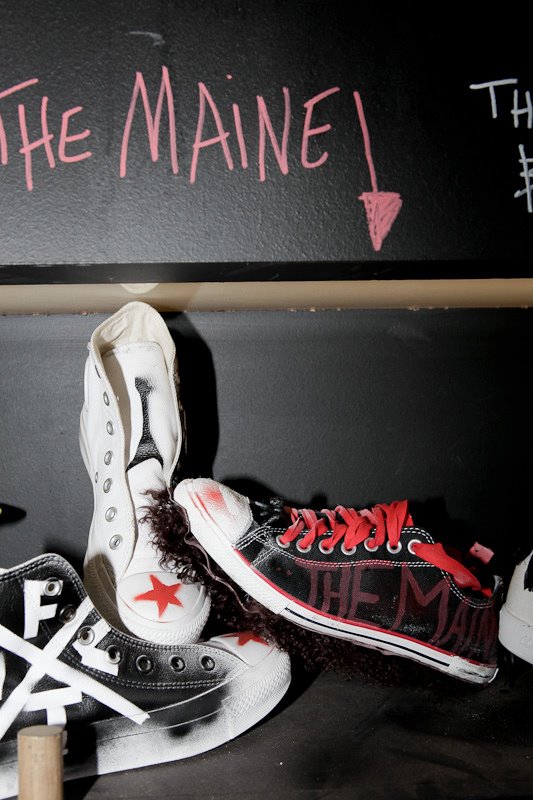 They Even Turned their Band Life into Photography Books.

In 2009, The Maine released This Is Real Life, which consists of journal entries from the band’s time on Warped Tour accompanied by shots from Dirk Mai. There’s even a section for fan art too, because how could they not include their fans? This is The Maine we’re talking about.

“The idea behind it is, to show life on the road, from our perspective, and in our own words.”

2013’s follow up Roads documented the next four years after This Is Real Life, full of over 1000 photos of the band on tour, in the studio, on their days off, and everything in between. Giving fans a peek behind the curtain of the music industry is always exciting, and the band have turned their time on the road into a wonderful collection of memories, behind the scenes snapshots, and proved that the best kind of art is in those unplanned, unstaged moments when life simply happens.

If you know what’s good for you (and great art always is), make your way to the 8123 pop-up shop and witness the opening of The Maine’s art gallery to see what new visual surprises the guys have lined up for 8123 fest!