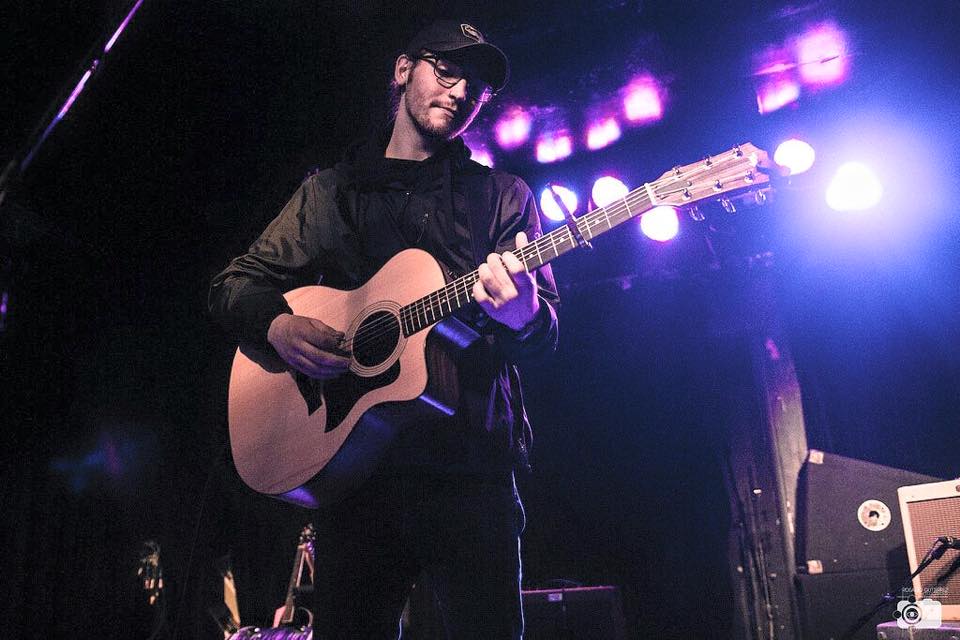 It’s not uncommon for band members to juggle various responsibilities, but juggling two bands at the same time is a different story. At times you’ll find Ryan Scott Graham stage right for State Champs or center stage for Speak Low If You Speak Love. Other times you’ll find him “laying down the bass grooves” or “singing hyper-personal songs in front of strangers.” And you’ll find him at home in Michigan or traveling around the world and back on tour.

Graham may seem comfortable on stage now, but the 25 year old wasn’t always musically inclined. “I didn’t have any interest in learning an instrument until I attended my first local show. Inspired by a scene I didn’t even know existed, I asked for a guitar [for] my next birthday,” Graham explains. After learning how to play the guitar, songwriting seemed like the next logical step for Graham, who majored in English Literature in college and is an avid reader. His outgoing personality made for an easy transition from singing along in the crowd to being the source of enjoyment for others. “But don’t be fooled: I was pretty awful at first,” he says with a laugh.

“The sensible thing would be to finish what I had started.”

Graham started Speak Low If You Speak Love, his first musical venture, in 2010. The one-man band’s first EP wasn’t released until a couple years later due to his constant touring with Good Luck Varsity; although Graham admits that the timeline is a little blurry. The four-song EP titled Sad to Say is an acoustically driven expression of emotions and is the epitome of Speak Low. However, he put Speak Low to the side in order to give his full attention to Good Luck Varsity and dropping out of college–which he did twice, before realizing that “the sensible thing would be to finish what I had started.”

Beyond the drive to make something of Speak Low is the inherent talent of creating an entire album without the ability to play the majority of the instruments needed, as Graham only plays the guitar and bass. “I have the direction in my mind when I’m writing a song,” he explains. “The beauty of creating a record is figuring it out as we go–at least for me. I never have a song 100% fleshed out going into the studio. I like to bounce ideas and see how that affects the overall vibe. It keeps things fun and creative!” So when drums, for example, are needed for a song, Graham recruits a friend. “I give him the feel that I’m going for, and he complies…If I’m not digging something he’s doing, it’s easy to guide him.”

In 2013, Graham really felt the weight of being a one-man band. “Releasing music independently is generally a solo endeavor. At the time of my releases, I didn’t have a team behind me, so I was doing everything myself…When I originally released Everything But What You Need, I actually launched a Kickstarter campaign to help me with some of the financial burden. Typically independent bands pool their money to make their records and merch happen, but since SLIYSL is just me, I had a large undertaking, and it was all on my shoulders. It definitely helps to have a label’s support.”

“Musically, they’re on different spectrums, but not dramatic enough that you have to pick a side.”

Graham self-released Speak Low’s first full-length album Everything But What You Need in 2013, then he re-released it through Pure Noise Records last March. “The label breathed new life into it as far as revamping the artwork and adding the new songs and pushing it out to [a] plethora of people who would have never heard it otherwise.” Graham admits that without the help of the label, he wouldn’t have been able to take the record where he felt it needed to go. “I really needed a team behind me who believed in the songs to help me push it to the limit.”

With the support of Pure Noise Records, Graham has been able to take Speak Low on multiple tours in 2015. After recruiting a few friends from back home to accompany him across the Midwest, Speak Low If You Speak Love set out on its first full band tour this past September. “The tour vibe was a little heavier [and] louder with Four Year Strong, Defeater, and Expire, so I felt as though I couldn’t do the tour just acoustic.” Luckily, that seemingly radical transition was quite simple. “The cool thing about Speak Low is that it can function as either…The record has a ton of different instruments although it’s acoustic driven, so the songs didn’t lose any integrity.”

Outside of Speak Low, Graham is most well-known for playing the bass for the New York group State Champs, but this relationship was only cemented a little over a year ago. Thanks to the help of a mutual friend, Graham, who lives in Michigan, invited State Champs over after they played a show nearby, and “the rest is history,” Graham states. “Obviously New York and Michigan aren’t close on a map, but we make it work.”

“I have no room to complain when I get to do exactly what I want to do for a career.”

The acoustic atmosphere of Speak Low contrasts significantly with State Champs’ head-banging, mosh-pit ensuing, pop-punk tunes. “The connection between State Champs and Speak Low is drastic, but still complementary,” Graham admits. “I think both endeavors tend to represent different things.” Perhaps they’re two different methods of expressing similar emotions and experiences. “Musically, they’re on different spectrums, but not dramatic enough that you have to pick a side.”

The two bands do have a small fan overlap though. There are some fans of State Champs who don’t realize that their beloved bassist has a side project, while some die-hard Speak Low fans don’t know about Graham’s double life with State Champs. When, and if, these realizations occur, it’s usually a win for everyone involved, and State Champs don’t seem to have any issues with Graham’s side project. “It’s all a musical web. State Champs have provided me with some insane opportunities to take my solo project places. It’s hard to believe I’d have been able to do as much as I have without that boost.”

Taking a quick glance at his packed schedule, Graham admits that he has no time off for the foreseeable future. Juggling commitments for two bands is not easy. Graham’s life is filled with tours, writing sessions, and traveling. “I get stressed out thinking about it sometimes, but it’s fun and rewarding, and I have no room to complain when I get to do exactly what I want to do for a career.”