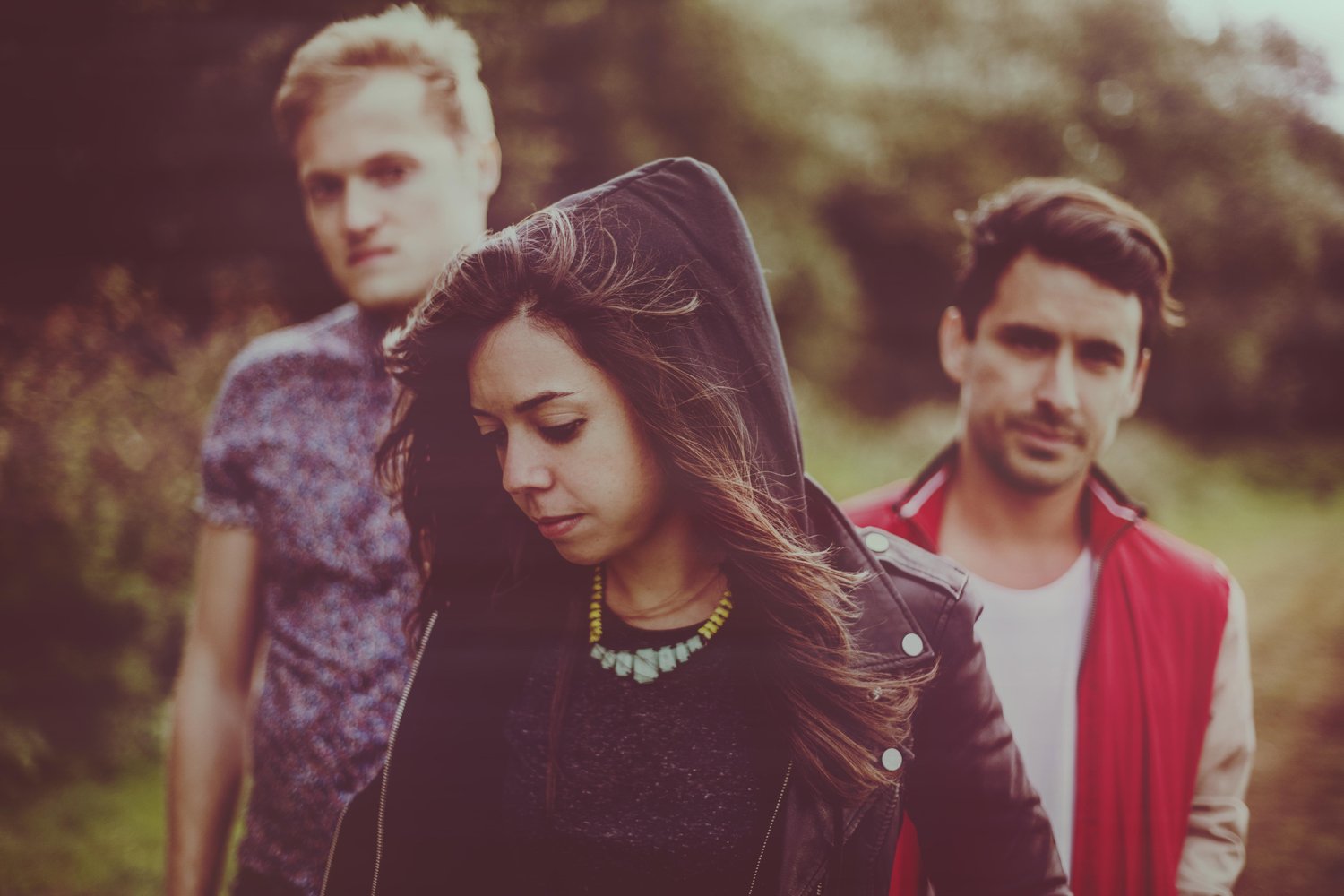 “Moving to such an amazing city like London, where there’s music everywhere, it was inspirational to me for sure.”

If you went to Warped Tour this year, you might’ve run into SYKES. The UK based pop band have made their way stateside for a British invasion of their own, spending their entire summer on the touring festival. If you did happen to see them, you might’ve been drawn to their hybrid electronic-pop sound, just like I was. It seems to come so naturally to the trio, it’s hard to believe this wasn’t what the band set out to do—but call a Ripley’s representative, because it’s true. “A long time ago it was kind of acoustic, and it’s transformed, which is nice. It’s been like an organic process,” vocalist Julia (no last name necessary) reveals when she calls me from the tour.

Way before they came into their synth elements, the band met during college. “Chris and I, we met at like the beginning of uni and we started a band… At the same time Will, our drummer, was in a different band.” They met, they graduated, and then the three made a move that was bigger for some than it was for others. “The guys are from London, so they’re true Londoners…I was born in Spain, and I didn’t actually grow up in England.” Planting roots in The Big Smoke brought music right to Julia’s front door, making it more accessible than ever before. “Moving to such an amazing city like London, where there’s music everywhere, it was inspirational to me for sure.” This time around was different for Chris and Will, too, because being in a band opened up the city in completely different ways. “For the guys, you know, we were together just kind of taking everything in and really loving the new music scene that was there and being able to enjoy that.”

“The first night at the [post-show] barbeque, Kevin Lyman got us to play a set, like an acoustic set.” The performance introduced SYKES to all the other bands and crew on the tour… “Just meeting all the bands… it’s great. I’d say that’s, so far, my favorite memory.”

Since then, they’ve built the career that led to signing up for America’s punk rock summer camp. From their first show at the legendary 100 club (“It’s kind of funny looking back at the fact that we played such a cool venue as our first gig.”) to playing concerts tirelessly (“I feel like we may have played pretty much most the venues in London over the last couple years,” Julia laughs), SYKES worked their asses off to earn their spot—and their air conditioning. When we get started on how Warped has been for them so far, Julia is quick to mention the oasis of the tour bus. “We’ve toured Europe and the UK mostly, we’ve always done it in a really small car, because you can over there, because all the cities are like two hours away.” The routine was small car, hotel, small car again. “We would literally sit all our backline in this tiny, tiny car, so this is incredible to come here and actually have a bus, it’s amazing.” Another “cool” factor? Being able to escape from the Warped Tour heat. “Having air conditioning is amazing, it’s so hot for us out here.” The band comes from Europe’s cloudy skies and mild temps, and now they’ve been thrown into the South’s ring of fire. “The humidity is unbelievable, like in Florida, that was just another level.” 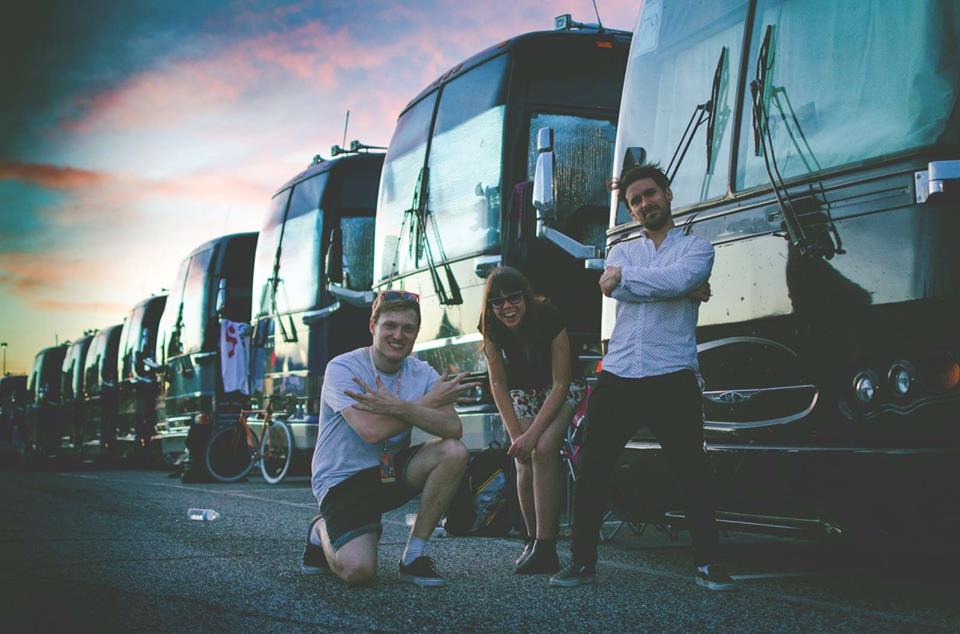 While experiencing the American heat, the band is also taking a shot at American traditions. They celebrated their very first Fourth Of July this year, and did it in true red, white, and blue style. “It was a lot of fun! We spent it in Savannah in Georgia, and we went and saw some fireworks and generally [were] American,” she laughs. Warped Tour traditions aren’t lost on the band either, and they’ve been enjoying the extra curriculars to the full extent. “We’re certainly loving the barbeque life,” Julia tells me. “The first night at the [post-show] barbeque, Kevin Lyman got us to play a set, like an acoustic set.” The performance introduced SYKES to all the other bands and crew on the tour, and Julia says they’ve loved getting to know everyone. “Just meeting all the bands… it’s great. I’d say that’s, so far, my favorite memory.”

“I think we’ve kind of gone more live with this EP, we’re really excited for that. We thought that maybe our previous recordings didn’t quite correlate to our live show, and we’ve kept this one a lot more real and live.”

The fans the band has met so far have been good to them as well, and to repay the kindness the trio has been treating them a one of a kind SYKES experience. “We’re mixing it up a little bit everyday, we’re changing a little bit every day.” When you wander up to the Cyclops Stage for their set, you’re treated to a mix of the band’s discography, sets that weren’t played in the town before, and won’t be played again in the next town either. Another exclusive is an unreleased song titled “Back To Me”. SYKES likes to play that one, and listeners share that opinion. “People seem to be liking it.”

SYKES also hopes people will like their brand new EP. As a part of their evolution, they’ve changed up their sound from previous releases. “I think we’ve kind of gone more live with this EP, we’re really excited for that. We thought that maybe our previous recordings didn’t quite correlate to our live show, and we’ve kept this one a lot more real and live.” The new sound will give listeners a preview of what to expect when they show up at a concert, and the band is happy with the result. “We’re really proud of the way it’s come out.” 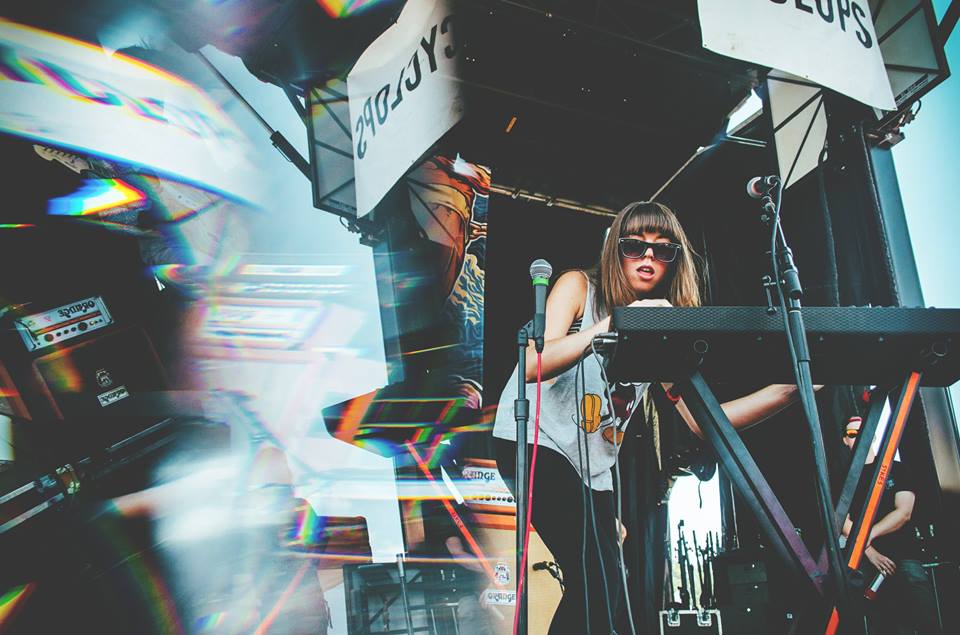 To wrap up the interview, I ask a question that never fails to provide an interesting story with Warped Tour recruits. What’s the craziest thing they’ve seen? Surprisingly, though, the answer comes from a show closer to home. “I mean, it’s not that crazy, but we played this show once… it was kind of just us and a couple of other people,” she starts, setting a mild stage for a weird story. “This guy, he sort of strolls into the bar and you can tell he’s had a few to drink, and he ordered some drinks at the bar, and like stumbled halfway across the bar and put his drinks on the ledge behind him, and he’s just kind of like leaning on this ledge and watching.” Much to his (probable) future regret, all eyes were on him at the small show when he made an, um, “wax-imum” mistake. “He kind of reached behind him for a drink but missed his drink and he got a candle instead. And then this candle’s lit, and he just downs this candle. Wax went all over him.”

For all intents and purposes, the man left the bar soon after and is considered to be fine, but SYKES still learned from the experience. “We’re just gonna ban candles from our gigs now,” she laughs.