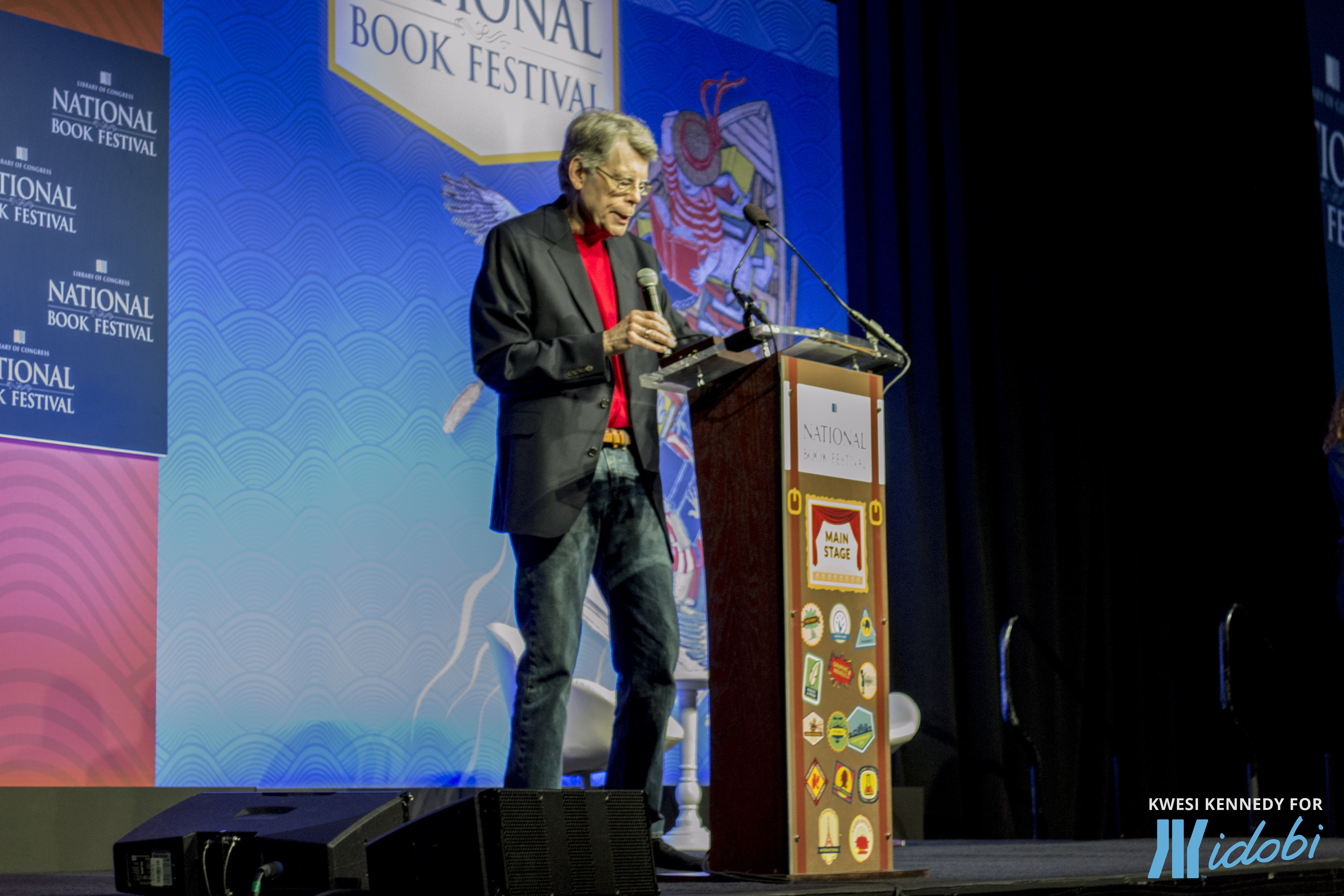 “Writers are supposed to be secret agents.”

People seem surprised when you tell them Stephen King is funny. Their eyebrows lift and their heads tilt back. Sometimes they murmur “really?” or pause to ponder how that’s possible. One doesn’t expect the aptly named King of scares to be so observant of the humor in daily life. Johanne Bégin smiled at the revelation of Stephen King’s comedic side while she and her husband Dr. Guy Berthiaume, the Librarian and Archivist of Canada, spoke with Dr. Carla Hayden, the Librarian of Congress. Minutes later Johanne confided she’d never heard King speak, although she’d read all his books. It was my turn to smile, “You’re going to enjoy this,” I told her. Of course, King had surprises in store for me too.

The hum of the crowd amplified rather than hushed as Dr. Hayden walked out; then thundered when she welcomed King onto the inaugural main stage at the National Book Festival. King brought on the laughter right away, telling us a full five people showed up to his first book signing: three were college friends of his, one bought a copy of Carrie, and the last was a chubby little child who wanted kung-fu books, which King helped him find.

“I was in a supermarket, this was in Florida, my wife and I have a place in Florida. We didn’t really want to go but we turned sixty-five and it’s the law.”

It’s no surprise the laughter carried on from there. It didn’t stop when King said he’d predicted Donald Trump when he wrote The Dead Zone, or when he mused that someone out there has a Francis Ford Coppola autograph signed by him “…because writers are friggin’ liars.” We giggled at how King likes it when he’s in the bathroom at someone’s house and discovers books by the commode because then he knows he’s with his “peeps.” We fell all over each other because the first person he saw reading one of his books in the wild told him it was “shitty,” to which he replied, “I won’t be buying that then.” How about the lady who recognized King at the grocery store? She declared she didn’t like his work because it’s too scary.

The talk Stephen King gave that warm day, at the Nat Book Fest 2016, reached comedic levels we should start calling literary stand-up. No hyperbole. It was that good. And just like the legends of comedy, Stephen King was most enthralling when he turned his wit to social commentary.

“There goes Stevie. He’s always got his nose in a book.”

That’s where the surprise came in. King paced the stage and told us, “All of that shouldn’t bring me to the subject of literacy but it does.” He’d taught High School English for two years, leaving when he noticed when many of the kids entered his class, “the lights went out of their eyes and no matter what I did that light would not come back on.” Certainly King could empathize, he’d been teased for reading. Taunts of, “There goes Stevie. He’s always got his nose in a book” followed him as a child. Being teased is likely why he wanted to reach kids when they were younger, maybe six or seven, when their minds were still open. “Non-readers live just one single life—it may be a good one, it may be a great one—but a reader can live thousands. I wanted kids that were still open to that idea. Sometimes when the right book falls into the right pair of hands it lights a fire that leads to others.”

King’s three children received their inheritance little by little each day. They were never told they must read, “but they saw that the shelves were full of books and mom and dad never went any place without one in hand or tucked under an arm. We read to them everyday, of course, but not to improve their minds, but to amuse them, to stop the constant squabbling, and to keep them from ripping the goddamn house apart.”

“One rainy day, desperate to entertain them before they drove us out of our minds, I bought two Marvel comics from the local drugstore—not sure if the kids would like them. They seemed very wordy and more than a little violent for children of four and two, but my daughter enjoyed them and my son went absolutely bug shit for them.”

Not all inheritances are contained in stocks and bonds. Some are printed on glossy pages that contain webslingers named Spidey and world saviors who call themselves Avengers. Others are filled with epic fantasy, rangers and elves on quests. It’s these inheritances, ones written in indelible ink, that can never be depleted, they cannot be stolen or spent.

The King children took the legacy of books their parents passed on to them and multiplied it; son, Joe Hill, has written three bestselling novels and continues to write the ongoing comic book series Locke & Key, daughter, Naomi, is a Unitarian Universalist minister, and youngest son, Owen, has written short story collections and collaborated with his dad on the upcoming novel Sleeping Beauties. King’s four grandchildren read as well “because they grew up with books and when you do that, reading is the most natural thing in the world.”

“…as if learning to think is a thing that just happens naturally like learning to walk. Believe me it’s not.”

“I’m bragging on my kids,” he said, “yes, but I’m also trying to make a point.” For King it is unmistakeable, reading leads to critical thinking. It’s important because he also believes that as everyday reading declines so too does analytical thought. He’s bothered libraries aren’t prioritized in this country. We don’t laud our authors the way we do our actors and athletes, and maybe that’s good because as Stephen King mentioned earlier in his talk, “Writers are supposed to be secret agents.” The truth of the analogy hit me days later: The power of a secret agent is in their ability to affect change while remaining unseen; yet an author cannot wield the power to expand our minds with books unread. 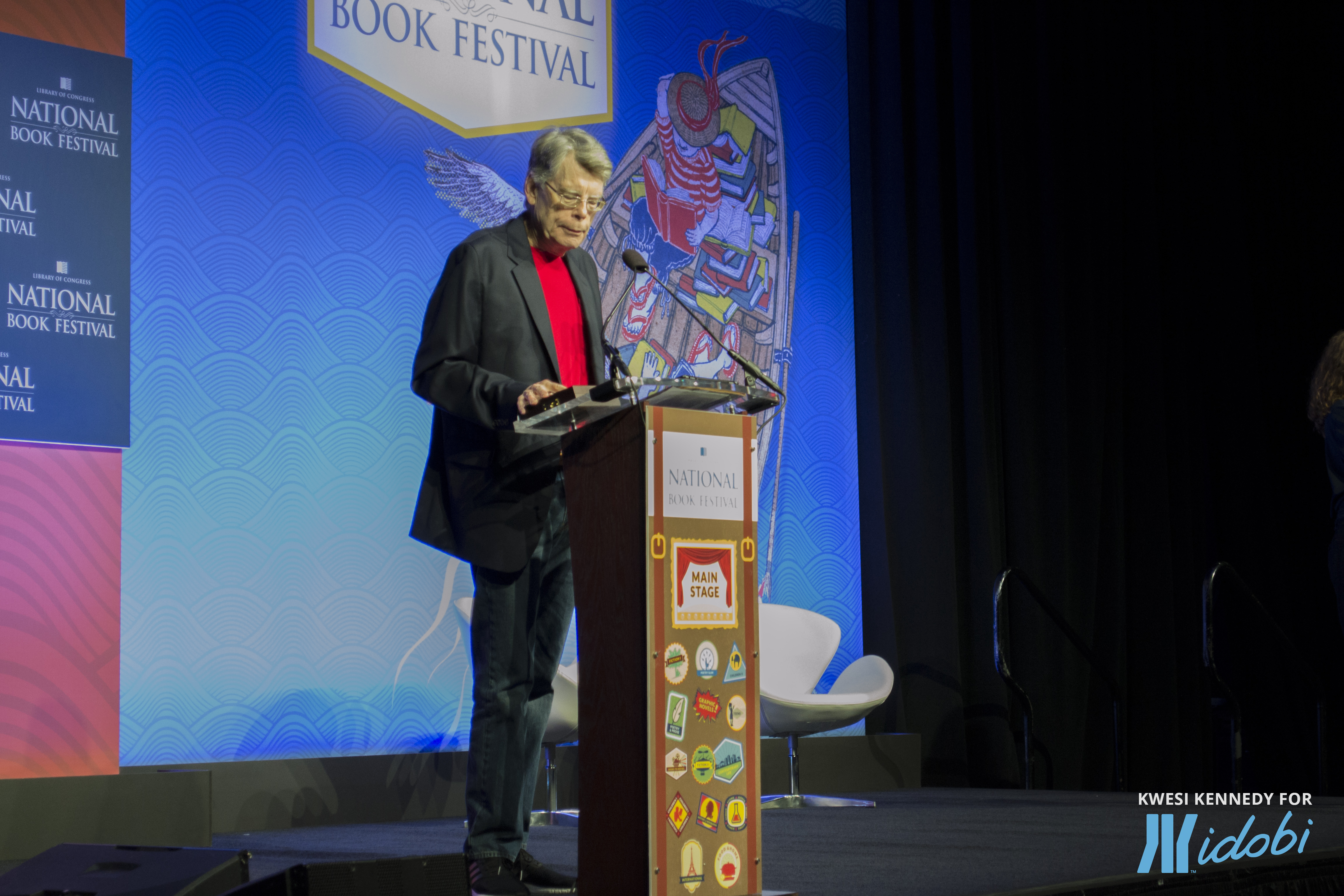 It all came together then. Stephen King has a message for that guy, Al, who taunted him about reading, and King is also giving notice to all those who think reading is a weakness; he’s sounding an alarm for parents to bequeath a literary legacy to their children, but mostly he’s speaking to the children who travel through space and time by surfing the pages of a book:

“That’s right, Al, always with my nose in a book and these days with my ass in a Mercedes. Suck on that.”

That way, our future successes will be no big surprise.

Our thanks to the Library of Congress for hosting such an edifying book festival, and to Sheryl Cannady for hosting us, and finally to Johanne Bégin for inspiring me.