“Looking out for your friends within the scene has always been part of what we do and this was a no brainer.” – Josh Franceschi 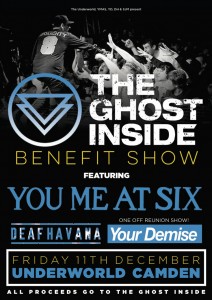 On December 11th, 2015, I was lucky enough to be one of 500 people crammed into the Camden Underworld club in London for the The Ghost Inside Benefit show. Of course, I’d had to wake up at 3am EST a few days earlier in order to secure tickets, which sold out in about a minute, but as I was already going to be in London the night of the show, it was totally worth it.

Whether it’s bonding with other fans while standing in line, picking up people who fall over in the pit, or watching our favorite bands banter with each other on social media, there’s a feeling of solidarity in our scene that can be hard to find elsewhere. After The Ghost Inside was involved in a horrible bus accident in mid-November, there was an outpouring of support from other bands, including You Me At Six who, together with Deaf Havana and Your Demise, put on a charity show with all proceeds from the tickets and merch sales going straight to their friends in TGI.

The Underworld is cramped and sweaty and smells sort of weird. Nevertheless, the energy from the crowd was palpable (which probably didn’t help the sweat-situation), whether they were shouting along to Deaf Havana’s tight opening set, which included their latest single, “Cassiopeia”, or thrashing around in a hypnotic but mildly frightening circle pit for the second band of the night, Your Demise. The British hardcore punks had called it quits in March 2014, but reunited for this one-off gig in support of their good friends, proving that solidarity for the scene is stronger than in-band politics, and about half the audience was baying for them well before they hit the stage. 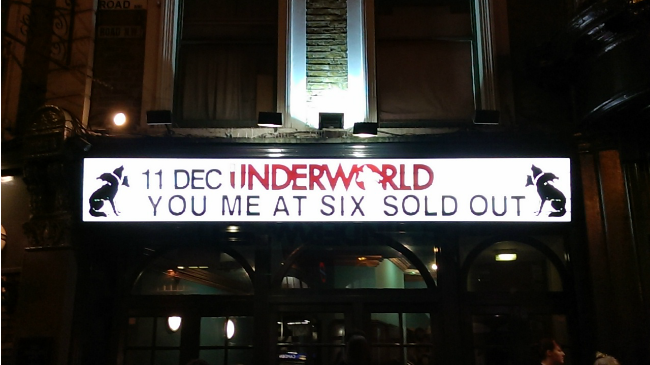 I don’t know how long it’s been since You Me At Six last played a show that small in the UK–even their North American tours tend to sell out venues of 1000 people or more–but they came out to thunderous screams. They gave it their all in a fresh, energetic twelve-song set which included their “greatest hits” including “The Truth is a Terrible Thing”, “Underdog”, “Reckless”, and the recently retired “Liquid Confidence”, before ending with a crashing rendition of “Bite My Tongue” that left the crowd flailing (or maybe that was just me). For those few hours, I was literally and figuratively close to 500 strangers and while I’ll probably never see those particular people from that crowd again, our show of support for a band in need is just one example of how strong our community can be. It doesn’t matter if it’s your best friend or a total stranger: when someone in the scene needs you, you answer that call. The Ghost Inside may be down for now, but as long as they have friends and fans who are willing to come out for a night of fundraising and good times, they’ll never be out.

Tags: Deaf Havana, the ghost inside, You Me At Six, Your Demise