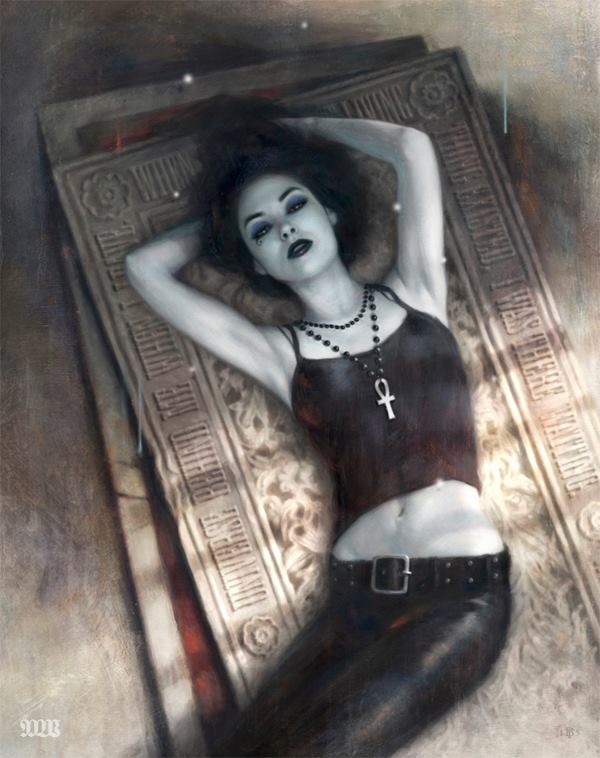 There is no character more synonymous with our scene than Death. I’m not talking about the state of being or not being—dependent upon which altar you bow to—I’m referring to author Neil Gaiman’s personification of the last breath. Death, as a comic book character, rocks. Take a look at her above. She is simultaneously all things punk and emo and fabulous; not only in appearance but also in her symbolism. She is the incarnation of so many emo/hardcore kids’ one true obsession. And being her stan feels a whole lot more healthy than the alternative. Ya know?

This is why, when fellow author Junot Díaz asked Neil Gaiman the titular question during a conversation about the new The Sandman: Overture hardcover, at the Congregation Beth Elohim in Brooklyn, every one of us in the audience held our breath: Does Death ever come to you in your dreams?

Before that moment both Gaiman and Díaz kept us laughing, not by cracking jokes but by laying down the truth with such winking wit we couldn’t deny it. Therefore we had no choice but to smile. Gaiman mused on looking forward to stealing ideas from the imagination of his infant son, in the same way he took The Wolves in the Walls from the dreams of one of his daughters. The gathering erupted in applause and giggles when he mentioned that the contradictions found in global mythologies prove “everybody is full of shit.”

The two writers spoke of DC Comics’ unofficial 1980s motto, “We’re number two…but we try harder, and the problem with superhero comics in the suggestion superior violence is what makes the heroes good. That didn’t work for Neil. He wanted to write comics, but he felt “a bit like skipping the violence [when writing superheroes] was like fast-forwarding the sex in a porno movie—it kinda missed the point”. So Gaiman focused on character and mythology. The great Karen Berger, the woman who turned Vertigo Comics into a powerhouse, had no idea what Neil was doing when he started writing The Sandman Comics, but she knew he ought to be left alone to do it.

Did I mention Karen Berger is brilliant? Well, check this out. By the time Gaiman reached The Sandman #8 (it’s not a hashtag, it’s a number sign—read a book) he says he was no longer a derivative writer. Somehow the genesis of The Endless (The Sandman’s siblings, a group made up of universal states of humanity like Delirium, Destiny, Desire and Despair) is the same point when Gaiman figured out his writerly style. “That [book] sounded like me, and suddenly I had a voice.”

Like our favorite rockstars, Gaiman had released his first big record with The Sandman #8. And it is only a cliche because it’s true when I say, Neil Gaiman’s Sandman has become a global phenomenon. It’s been twenty-six (26) years and we rushed out to buy The Sandman: Overture on Nov 10th the same way we rushed to comic book stores for the individual issues. Even sweeter, the appearance of the character Death coincides with Neil finding his own voice because Death, among the seven Endless, is his greatest hit. Just ask Junot Díaz who asked several questions about Death, and who brought more questions about her from his friends and students. 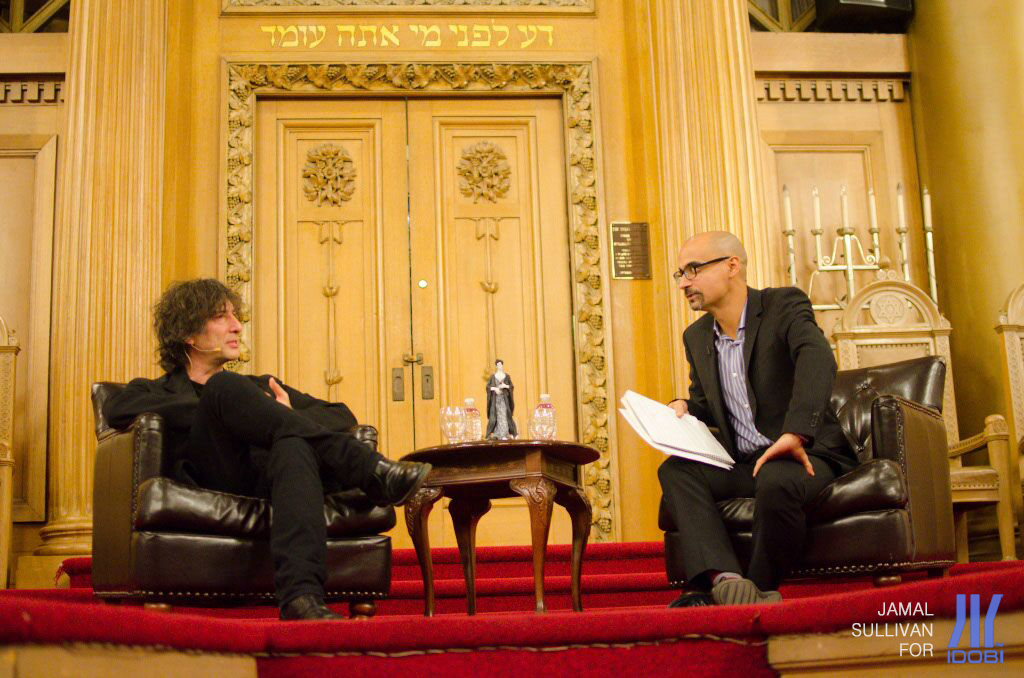 But why are we all so obsessed with Death? It’s not because she’s pretty or mysterious or the most sane amongst her siblings. It’s not that her fashion sense is killer or because her black hair and pale skin belie the sunniest of personalities. It’s not the knowledge 1993’s Death: The High Cost of Living is one of the greatest mini-series to ever be given life through sequential art. It’s not even because she’s the last woman we’ll ever kiss. Nope. We—especially those of us in this scene—obsess over Death because she is a synonym for music we’ve never heard and that no one can tell us about. She is our last great unknown. The one experience we will all share, no matter who we are. And coming to grips with the fact we will each walk hand in hand with her one day ironically frees us up to truly live. 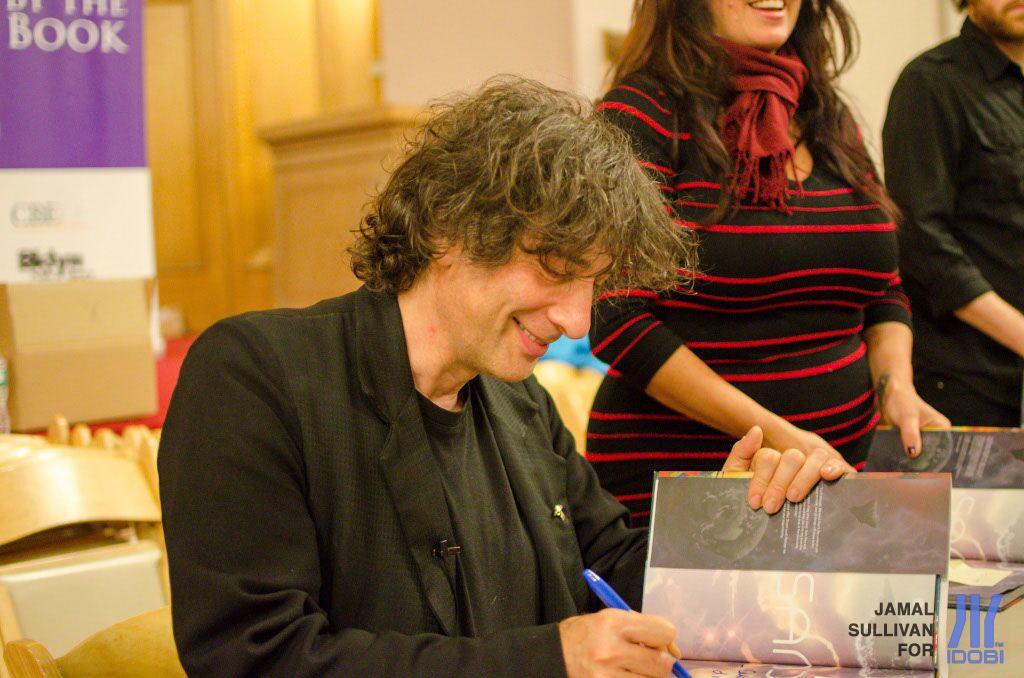 The idea Death/death gives life meaning is another truth Gaiman and Dí­az, as the craftsmen they are, communicate so profoundly in their work. As Gaiman said, “I had to look at the world through her eyes in order to write her. It’s a natural thing. You’re born and you die. It’s what happens in between that’s interesting.”

The answer is no, Death has never come to Neil Gaiman in a dream. But he did dream he was The Sandman aka Morpheus aka Dream once. Isn’t it funny? In that role Gaiman would accomplish the same thing he already has as one of our favorite writers. As a seminal author or as the brother to The Night (aka Death), he can forever walk hand in hand with her and never truly die. And, as infinite as Gaiman’s own imagination, the places we have yet to go are Endless.

See more photos from the event here, and a replay of the live stream with an introduction from DC Co-Publisher Jim Lee below: