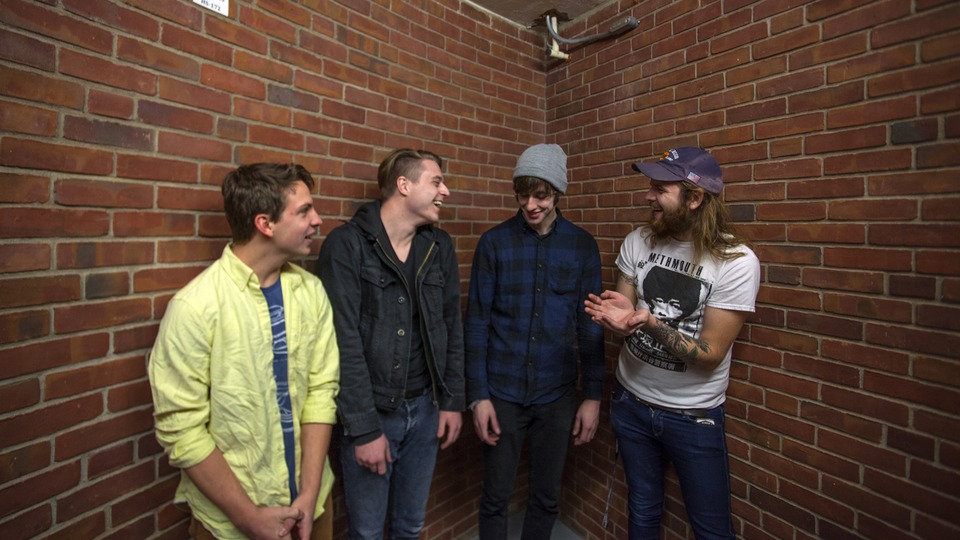 “Music is just always gonna be something I love doing, in any facet.”

As the name hints at, Sorority Noise got their start while still in college. Three out of the four band members were students at the time. Lead singer Cam Boucher himself studied jazz saxophone and recording before graduating last May. Both their critically acclaimed full-length albums (Forgettable and Joy, Departed) were incidentally recorded at his school. While Boucher doesn’t believe college degrees set them apart in any way, it still played an integral role in the band’s development. “I met so many people there and we had a house where we put shows on, so there were constantly bands from my college. I learned a lot about myself in my first two years being away from home and trying to take care of myself.” School didn’t always line up so harmoniously with the band, however. Boucher recalls that in order to get to a show in time, he once tried ripping off the second page of a final and telling the professor that he didn’t receive it. He anecdotally quips, “They didn’t buy it and I got super fucked.”

For Boucher, it’s worth it since touring is one of his favorite parts of being in a band. “I love touring. I could do it all year long. I could play a show every day.” It’s this love that gets him through the rigors of Sorority Noise’s increasingly heavy tour schedule, which included their first full US tour alongside fellow up-and-comers Knuckle Puck, Seaway, and Head North last fall. “We’ll be screaming at each other in the van over something stupid and then after we play it’s like, thank god I have this person in my life and I would not be able to do what I do without them.”

“They didn’t buy it and I got super fucked.”

Of course the music is what makes all of this possible. “I have a lot of anxieties in my life and music’s the only way that I know how cope and deal with them.” Boucher writes music solely for himself, albeit not selfishly. “Music is a weird thing, it’s very self-serving. It’s not built for the consumer. It’s designed for the person writing the music to have a therapy and a release from what they’re going through.”

When I ask him if he ever weighs what fans want to hear sonically while writing music, he responds with a resounding, “Fuck no.” It turns out to be an issue that Boucher is very passionate about, expanding to shows and what fans expect on the setlist. “That conversation is so real and something that’s not talked about enough. It’s like does the artist owe the fan the song performance or should the person at the show enjoy it because they love the band and want to support the artist.” For Boucher, it’s a firm belief in the latter. “It’s important to do what you want to do because you’re gonna be the one playing those songs.”

When I ask him if he ever weighs what fans want to hear sonically while writing music, he responds with a resounding, “Fuck no.”

With Joy, Departed, their first release on Topshelf Records, Boucher cranks that self-driven honesty to new heights. “This record was a chance for me to start talking about some things that were going on in my head that I had not necessarily had the ability, honesty, or vulnerability to do before.” In particular, he references a song on the album called “Using.” “It’s the first song I really wrote about having manic depression and how I used to make it such a volatile part of my life, but now I’ve come to terms with it and know I’m worth more than my head lets me believe.”

While incredibly therapeutic, Boucher’s music still takes a toll on him, especially when released to the masses. “Your emotions are on display and something that upsets me pretty deeply is when people on Twitter will say like, ‘Sorority Noise wrote the saddest song of 2015,’ or ‘Damn dude you’re so sad and I love it.’ Like these are very real emotions and very real things. People just boil you down to being a sad person and it hurts to hear that I would be defined solely by a quality that is not 100% of my being. I fight manic depression and I deal with my emotions being completely out of control and not being able to handle myself, but I don’t think that makes me a sad person.”

“This record was a chance for me to start talking about some things that were going on in my head that I had not necessarily had the ability, honesty, or vulnerability to do before.”

At the end of the day, however, Boucher wants his music heard. “Sometimes I wish that these songs might just be for me, but I know that if I can help a person through something that they can’t articulate, I want to be part of that. People have come up to me at a show and been like, ‘This thing meant so much to me,’ and that means so much to me that it means so much to them.”