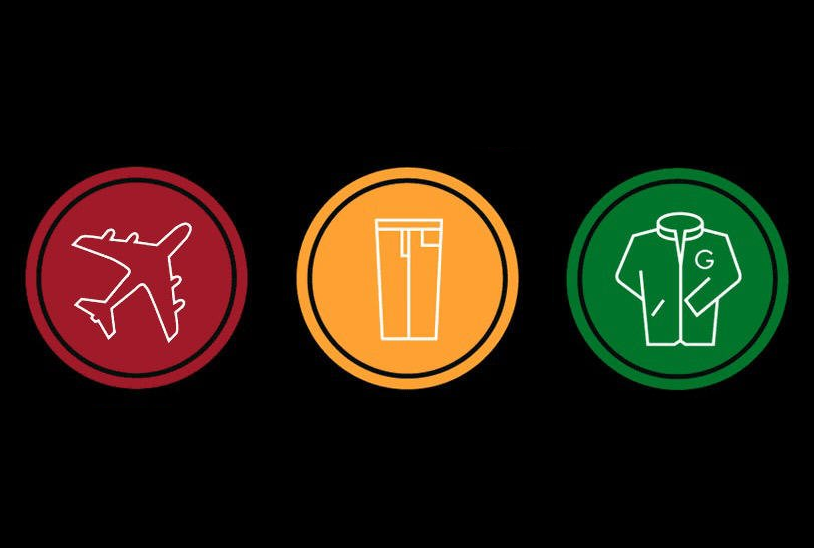 Pop punkers, we are officially old. This week, Blink-182’s Take Off Your Pants and Jacket turned fifteen years old. In honor of its birthday bash, the idobi crew got together to recount our favorite lyrics (and memories) from the monumental album. Check out what we had to say below, and join us in bracing yourself for the album’s Sweet 16 (maybe MTV will revive My Super Sweet Sixteen just to throw it the best celebration ever.)

“If we’re fucked up, you’re to blame”

Blink-182 loves your mom…but your mom most likely wouldn’t love Blink-182. Which is one of the main reasons why Blink appealed to me so much during my teenage years—and why “Anthem Part Two” was my go-to angsty track to blast out when I got ticked off at the adults in my life. I can remember scrawling the lyrics “Drown our youth with useless warnings / Teenage rules they’re fucked and boring” on notebooks, and hitting repeat on my walkman like there was no other song in the world. It doesn’t get more in-your-face than this: when you’re deemed too young to know what you want, yet fully expected to decide your future; when “being a teenager” is treated like some kind of affliction; when your generation is demonized for things beyond your control; sometimes you’ve gotta yell “if we’re fucked up, you’re to blame!” And of course, when layered over a skitty riff and the definition of a hooks-for-days chorus, it’s impossible not to start jumping around in your room with the speakers cranked up to eleven. Even though I’m no longer a teenager (and more chill now I can somewhat successfully adult), it’s still a song I come back to when I need to vent, and it reminds me of the important message Blink-182 have always upheld: sometimes, you’ve just gotta let kids be kids. (Alex Bear)

“When you smile, I melt inside
I’m not worthy for a minute of your time
I really wish it was only me and you
I’m jealous of everybody in the room
Please don’t look at me with those eyes
Please don’t hint that you’re capable of lies
I dread the thought of our very first kiss
A target that i’m probably gonna miss.”

Take Off Your Pants and Jacket wasn’t the first album I heard from Blink-182, but it is the album that made me fall in love with them. When we were asked to pick a lyric or verse to help celebrate the 15 year anniversary, I knew that the whole second verse of “First Date” was my pick. I was quick to fall in love, so when I had a first date with a girl I had a crush on for years, I acted out every part of this song, completely by accident. I thought I was confident until she walked in and smiled at me. That’s when everything fell apart and I couldn’t speak coherent sentences. Somehow, the date went pretty smoothly after that, until the end of the night. Standing in her driveway, I went in for a kiss and totally missed. I’ve never been able to relate more to a verse in a song as I was able to the second verse in “First Date”. (Alex Mayes)

“Lost the words, lost the nerve,
Lost the girl, left the line.
I would wish at a shooting star,
But the star, it doesn’t shine.”

I started taking a deeper interest in punk a few years after the release of TOYPAJ. I’d already been exposed to a lot of 2000’s alternative music, but hearing Blink-182 constantly on the radio really cemented that interest.

“Story Of A Lonely Guy” is a special song. I’ve always identified with how self-aware the main character makes himself out to be. Although a bit self-deprecating (but who in punk wasn’t back then?), these few lines feel more humbling than depressing. We’ve all unwillingly left something or someone behind. Blink tells us that sometimes it’s completely okay. (Dana Reandelar)

“I’m ripe with things to say, the words rot and fall away.”

“Stay Together For The Kids” embodies what it is to be young and unsure, while feeling like there must be something you can do to fix terrible situations. The relatable lyrics in this song speak to how there can be a million reactions in your head when your world is falling apart, but you can’t seem to formulate words to mend anything. It’s incredible that DeLonge could summarize that feeling of confusion in just a few words. It’s definitely important for kids, but it also resonates as an adult. As one gets older, the line reflects being insecure and how it’s okay to feel dumbfounded or child-like. This line is really special because it captures how times of change can leave our minds cluttered and our hearts stunned into silence. (Eli McDonald)

“I couldn’t wait for the summer and the Warped Tour.”

My punk rock side came out the summer before I turned sixteen. Dealing with the trials of living in the middle of nowhere, and the slow internet that came along with it, I had an mp3 player with about thirty-two songs given to me by a friend. That summer was all about those songs on repeat… And counting down the days to the Vans Warped Tour (meanwhile convincing my mom I was totally old enough to go.) Thinking back on “The Rock Show” all I have are memories of sunny days, scrawling the lyrics across my skin in sharpie, and riding my bike listening to the song on repeat while I daydreamed about the Warped Tour. “I couldn’t wait for the summer and the Warped Tour” isn’t only one of my favorite lyrics (of TOYPAJ and of all time), it’s one of my favorite memories. (Emillie Marvel) 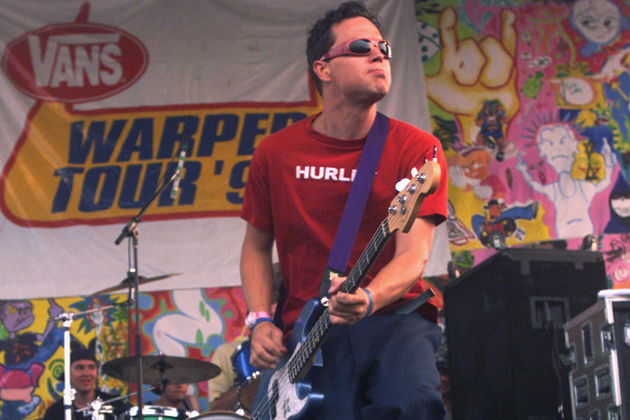 “Give Me One Good Reason” was one of the very first songs I heard when I got into the punk rock scene in middle school, and Blink-182 had me hook, line, and sinker. These two lines would set the stage for me as a young, vaguely emo/punk rock kid who had way too heavy of a side fringe and wrists lined with those rubber bracelets that featured band logos. Listening to this song again now reminds me of those times, and while some memories are more cringe-worthy than others (though honestly, who doesn’t cringe at their middle school era?), at least I had a pretty good taste in music. Sorry mom, turns out it wasn’t a phase after all. (Emily Yee)

“Hanging out behind the club on the weekend / Acting stupid, getting drunk with my best friends”

Currently my favorite lyric off TOYPAJ  is from “The Rock Show”. It’s not a serious lyric and wasn’t initially my favorite, but right now it’s one I always get nostalgic about. The song as a whole reminds me of right after graduating high school when my friends and I had just got our licenses, learned how to take trains to New York City, and felt like we were finally grown up. Being 18-20 year olds, we thought it’d always be cool to sneak some drinks into a Big Gulp and hang out behind the venues before going in because we were young and dumb, but it was fun. We thought we were on top of the world but now I see kids around that age doing it and just laugh and think “Wow we were dumb but hey… It was a lot of fun!”. Side note on Take Off Your Pants and Jacket, I didn’t notice the pun till about 2 months ago, true story. (Mike Fishkin)

“So give me one good reason,
why we need to be like them
Kids will have fun and offend,
They don’t want to and don’t fit in”

If you need one good reason to love Blink-182, “Give Me One Good Reason” is it. The band is often pegged as immature yet fun (rightfully so) but this song is a serious punk anthem that brings together all the outcasts while tearing apart societal expectations. The entire album acts as a journal / guide to being a teenager, and this entry is a reminder that you don’t have to fit in and there’s a place for all of us that don’t. (Hannah Hines)

There are a lot of great songs and lyrics on this album, but “The Rock Show” stands out to me because I think it was the first time I heard swearing in a song (I was eleven, and obviously very innocent). Fifteen years later, I love how defiant they are in this moment. No one really knows what they want at seventeen, but I like how they feel they shouldn’t have to justify their dreams or goals to anyone…even if they are proposing something as ludicrous as moving to Vegas with the girl they just met. Plus, who can’t relate to being directionless, especially in their teens? (Sam Devotta)

“Too blind to see tomorrow, too broke to beg or borrow”

Choosing my favorite lyric from this album was like choosing my favorite child (but possibly more difficult.) Besides the fact that TOYPAJ is my favorite Blink-182 album and I am an extremely huge Blink fan, this record has some pretty poignant and relatable lyrics scattered between the jokes and the fun fans love so much. The wordplay in “Everytime I Look For You” is fantastic, and the metaphors are exceptionally relatable for relationships that consists of more arguing than being in love. While the meaning behind the particular lyric I chose is one of the biggest reasons I love it, there are smaller, more technical aspects about the line that propel it to being one of Blink’s best. Literary devices like alliteration and internal rhyme give the lyric a memorable, snappy punch while the rhythm in which the line is sung creates a stand-out moment. Even though every lyric of TOYPAJ could be considered my favorite, if I had to get more specific it would definitely be this gem.  (Tess Reynolds)

Tags: 15 years, anniversary, Anthem Part Two, Blink-182, Everytime I Look For You, First Date, Give Me One Good Reason, Stay Together For The Kids, Story of a Lonely Guy, Take Off Your Pants and Jacket, The Rock Show, TOYPAJ