Sometimes you discover a story worth telling. Sometimes you become part of that story. As a teenager, director Chelsea Christer was introduced to pop punk band The Matches, which sparked the beginning of her journey to creating her feature length documentary, Bleeding Audio. Their story and Chelsea’s story are intertwined, and incredible—and you can hear her take on it through a four part diary. From concept to completion, travel along with her through the making of Bleeding Audio.

Read part one here. This is part two: Preproduction.

In sitting down to write this entry, I found it really difficult to make it interesting. Preproduction doesn’t always have the most dynamic twists and turns production often has. But it does involve a lot of research, preinterviews, research, development, research, emails, research, spreadsheets, and, did I mention research?

I already felt like I knew a lot about The Matches, but there was even more that I needed to learn in order to fully develop a feature-length film.

This initially started during the time I put together the promotional videos for The Matches’ reunion. For the videos, I had a set of questions that very generally asked about their history, but ended up opening doors to so many details that didn’t exist on the internet. After learning what I could from their answers, it took a few phone calls with all four guys, and A LOT of conversations with Justin San Souci and Jon Devoto (who are the easiest to access considering we’re all in the Bay Area) to start formulating the actual plot points of The Matches story—and how those ran parallel to the major milestones and changes in the music industry.

From these interviews and research sessions, I started to develop our treatment for the film. The treatment is a 3–5 page document that is essentially the prose/story version of the film. This is the outline that helps guide all of the preparation for interview questions and the B-roll or other moments we actively try to capture. Using what I learned from the guys, the act breakdowns I created (as shown in my Discovery diary), and the events that I knew were coming up (y’know…a few reunion shows)—I wrote and fine tuned the treatment that would later inform our production schedule.

But before any of this production schedule stuff, we were missing a crucial component: Budget. We had ZERO dollars to pay for ANY of this film.

That’s when we put together the plan to do a Kickstarter. Initially, we intended to raise funds for the whole film, but after scoping out the budget for production and post production together, we found it to be a much safer decision to separate out the two rounds of fundraising (and, oh my goodness, I’m so glad we did).

I feel like I should go into detail about this crowdfunding campaign, but considering my post production campaign is about to close, I simply am in no mood to talk about crowdfunding. Maybe I’ll add a bonus 5th entry to go into detail on my experiences with Kickstarter and what I’ve learned, and the magic that actually DOES comes with it. But for now, I’ll sum up this campaign in a few sentences.

Our first Kickstarter campaign should have been / was almost a complete and total failure. It wasn’t until nearly 5 days before it was over that we had one miraculous human being donate $10,000 to get a private show with The Matches, and the community mentality came in and we were funded the day before it ended. I look back now and see all of the things we did wrong, but I also look back and see all of the ideas that we had that were…really really great. 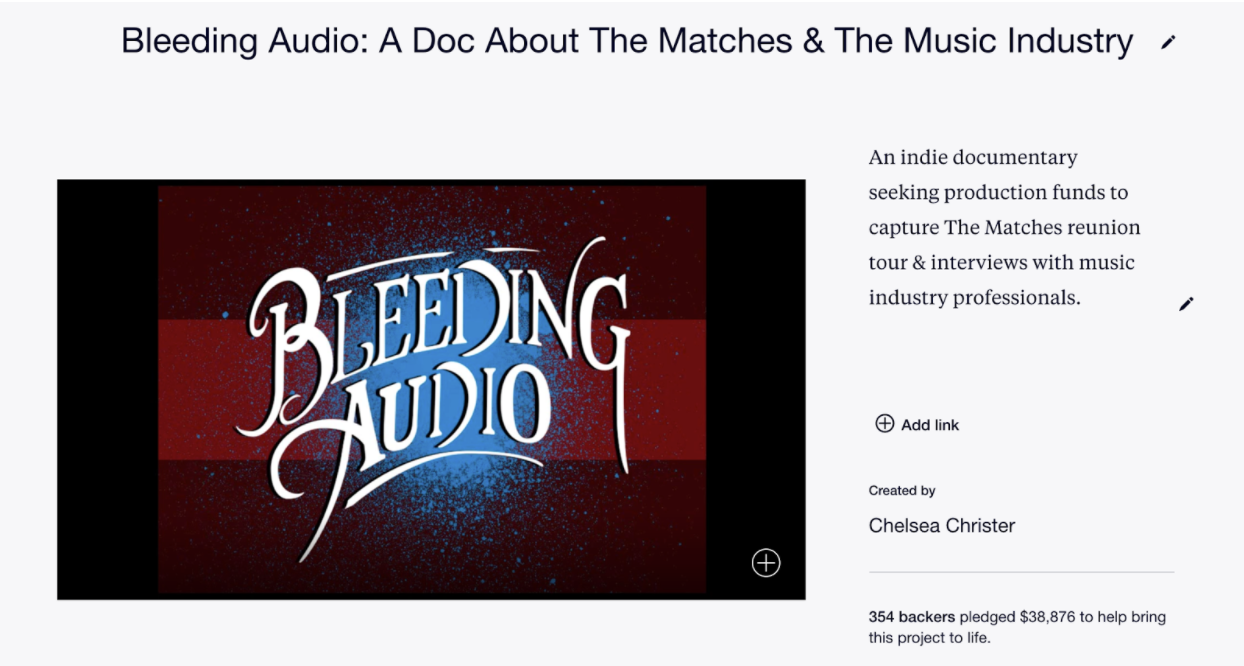 But hey, we were funded, and it gave us the opportunity to actually move into pre-production with actionable ideas rather than “oh hey, talk about doing a thing that we have no way of doing because…money.”

The biggest hurdle was selecting WHO the hell to interview for the film. The Matches provided me with a long list of names. The list included everyone who was involved with The Matches history, the significance of their involvement, their contact information, and (most importantly in regards to budget) where they are located in the world. From there, I got to do one of my favorite things: Organize all of the information into one, big, beautiful spreadsheet. Oh, yes. Alphabetized according to region, with several columns of information, notations, and contact info. The spreadsheet is a glorious thing to behold, but alas, because of all of the personal information, I can’t share it with you. Instead, I googled “heaven” and selected the first image, and yeah—pretty much the same thing. 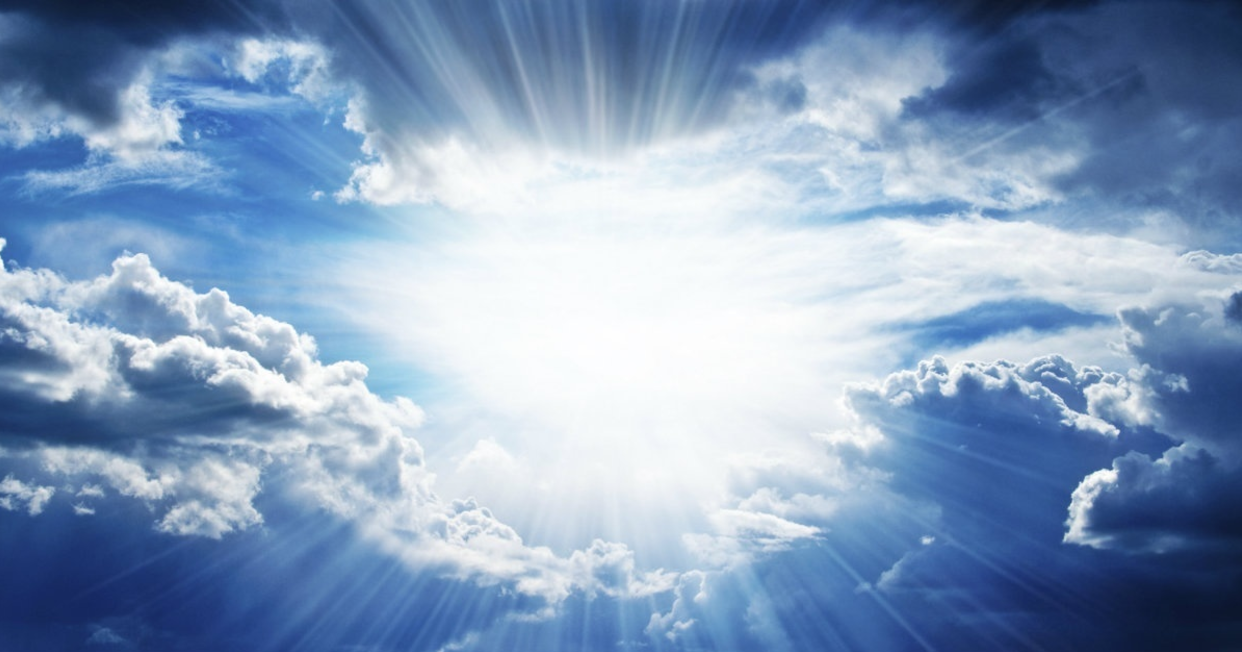 The criteria for interviewees was pretty straightforward; we wanted reputable sources who could provide us with key insight to the ins and outs of the music industry. It would be a huge added bonus if these individuals had a relationship to, or influence in The Matches career, but overall we had a lot of investigative questions in regards to the industry that we needed answered. Luckily for us, about 80% of our interviewees had a close relationship with or investment in The Matches’ career as well as a deep knowledge of the industry—a majority of them having traversed from the heights, to the fall, to where it is today.

Honestly, there are times I look at my list of interviewees and can’t believe how ridiculous the amount of talent is. I’m still in awe of some of the amazing people who agreed to be in our film, and so grateful for their participation. Check out this public list I’ve been able to publish: 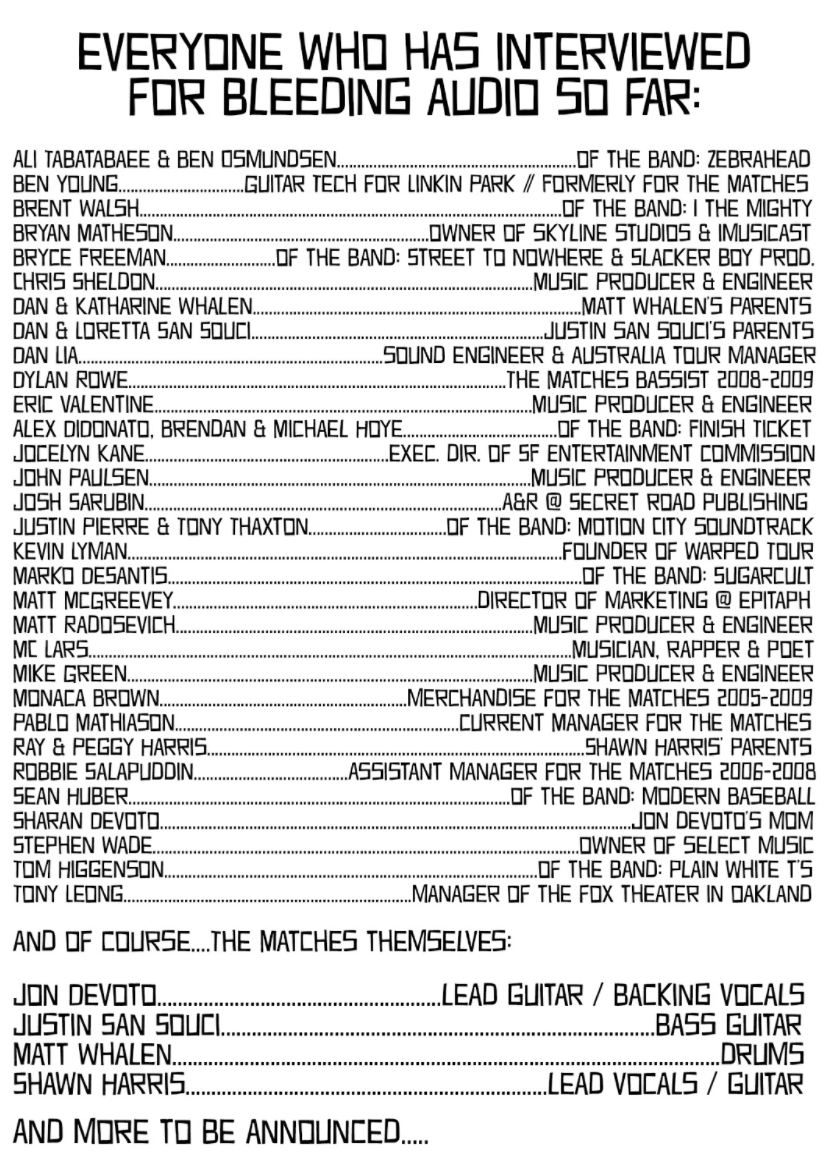 But I’m not gonna lie, there have been a few people I’ve reached out to who have turned down interviews. That has been really disappointing. Out of respect, I’m not going to name names, but each time someone would turn us down, it would fill me with a little bit of doubt in my film. It can be hard not to take it personally, but who knows, maybe they’ll have a change of heart in the 11th hour. Hey, the people we have in the film gave us incredible interviews and I’m so happy with what we have.

I keep starting to type about the content of the interviews, but I’ll circle back with that in the next entry. 😉

All of that was pretty much set, unless, you know, folks were on tour.

Oh, and guess what. ALMOST EVERYONE WAS ON THE ROAD. Trying to schedule full blocks of time in each region proved near impossible because at least 2-4 of my interviewees would be on the road. It wasn’t until we decided to save budget by scheduling interviews as people came through San Francisco that we actually were able to make some progress without breaking the bank on travel expenses.

Now that we had our interviewees selected and (more or less) scheduled, it was time to actually pick up the cameras and start filming…

Learn more about how to support the Bleeding Audio documentary here.