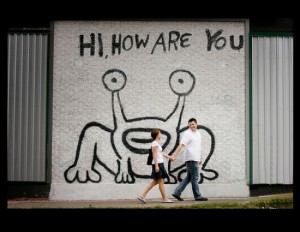 Since the homogenization of South by Southwest by the mainstream, it has become fashionable among music critics and self-anointed culture commentators to dismiss music festivals as passÃ©. They claim media conglomerates, bringing bloat, have diluted the musical variety which could be counted on at SXSW to make it palatable to general tastes. These observers conclude that the principles of independence and community that SXSW was conceived upon have been subsumed by the now ubiquitous forces of corporatization.

Coinciding with this sentiment is anxiety among locals who cleave to an idealization of Austin as a bastion of open-mindedness and creative experimentation; a singular cosmopolitan hub amidst the conservative wastes of Texas. They fret that there’s been a decline in Austin’s trademark Weirdness. For them, SXSW symbolizes the bland poser rabble which has infested the city. They despise SXSW for branding, marketing, and selling Austin’s Weirdness wholesale. From their perspective, SXSW co-opts their motto of “Keep Austin Weird,” slaps it on overpriced merch, and then sells it to out of town trust funders and cynical corporate label execs.

Apparently, the maxim’s innovators have been blind to the slogan’s potential for clichÃ©.

The “weirdness” that Austin puts on T-shirts and bumper stickers, like an incantation, isn’t going to ward off banality. It isn’t enough. “Keep Austin Weird” isn’t enough to keep Austin weird. Austin has to keep making weirdness happen. The city can’t “Keep Austin Weird,” because it can’t reverse changes that have already occurred. The city must actively cultivate the weird aesthetic it prides itself on. Residents must “Make Austin Weird,” again. You have to actually do something to achieve an ideal.

Austin is lucky in that it has a readymade mechanism to accomplish this: SXSW. Every year, tens of thousands of people make pilgrimage to Austin to take part in its trademark weirdness. The assumption among locals is that they epitomize the problem Austin faces in maintaining its character. They steal Austin’s heritage like colonists, suffocating the non-conformist spark they feed on.

But,  if people come to connect with Austin’s quirkiness, then Austin should engage them instead of detesting them for what Austin has enabled: gentrification, commoditization, and normalization.

Austin has to be weird to stay weird. Austin has to cultivate weirdness so tourists and new residents don’t consume it, but create it.