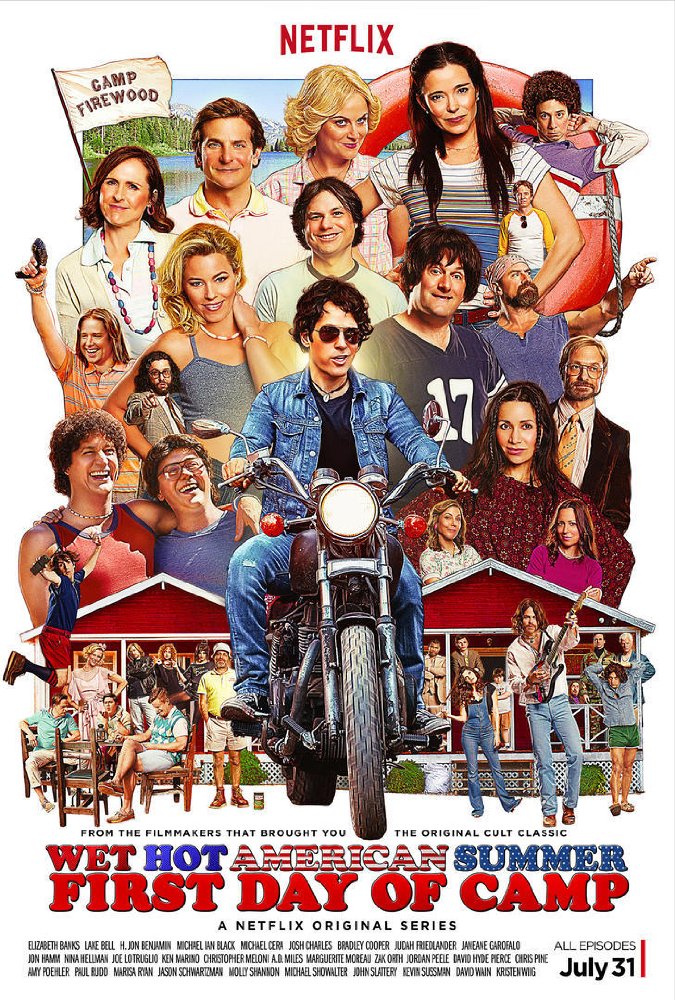 Basically: Cult teen film about the weirdest, wildest summer camp in the 80s gets a prequel and for once it’s actually better than the original.

First came the teen movies, then came the spoofs. Wet Hot American Summer brought WTF-ery to a whole new level back in 2001, when 20-somethings played teenagers enjoying their last day of summer camp in 1981 Maine. Now, in the 2015 TV prequel, the same actors reprise their roles, on the first day of camp. That’s right—the same characters. Now 40-somethings play 16 year olds. WTF, right? But get over the fact they’re the TV equivalent of AC/DC’s world’s-oldest-schoolboy routine, because that barely even registers on the show’s weirdness scale.

This 40-going-on-16 year old cast—some of whom are now way more famous than they were back then (Bradley Cooper, Amy Poehler, Paul Rudd ringing any bells?)—attempt to overcome the trials and tribulations of hormone-fueled teenage life in this series, set over the space of just one day. Boy, do these kids get a lot done. This is all documented by an undercover journalist, whose search for a legendary rock star supposedly living in one of the abandoned cabins turns her world upside down. Not to mention the subplot involving the dumping of radioactive waste which apparently turns people into talking cans of vegetables, in a conspiracy that goes as high as a very plastic looking President Reagan. Yeah, we told you it got weirder.

If you can get past all that, you’ll find a comedy for fans of The Office and Parks & Recreation, featuring high school drama, over-exaggerated teen archetypes, and cringe-worthy awkwardness only teenagers are capable of. It’s the kind of show you can binge-watch at 3am because you’re not meant to focus too hard or the plot starts unraveling. You can also watch it again and again too, because chances are you’ll miss some of the jokes the first time round. Pretty much all the characters are one-dimensional, but you’ll love them anyway because of the all-star cast’s ability to make even the strangest of stories entertaining. So get ready to (re-)live the glory days of American summer camp, in this ultimate (not really at all) guilty pleasure.

In the end: Watch it—it’s just so… Netflix. We can’t promise you’ll understand the plot, but you’ll have a good hard laugh along the way.