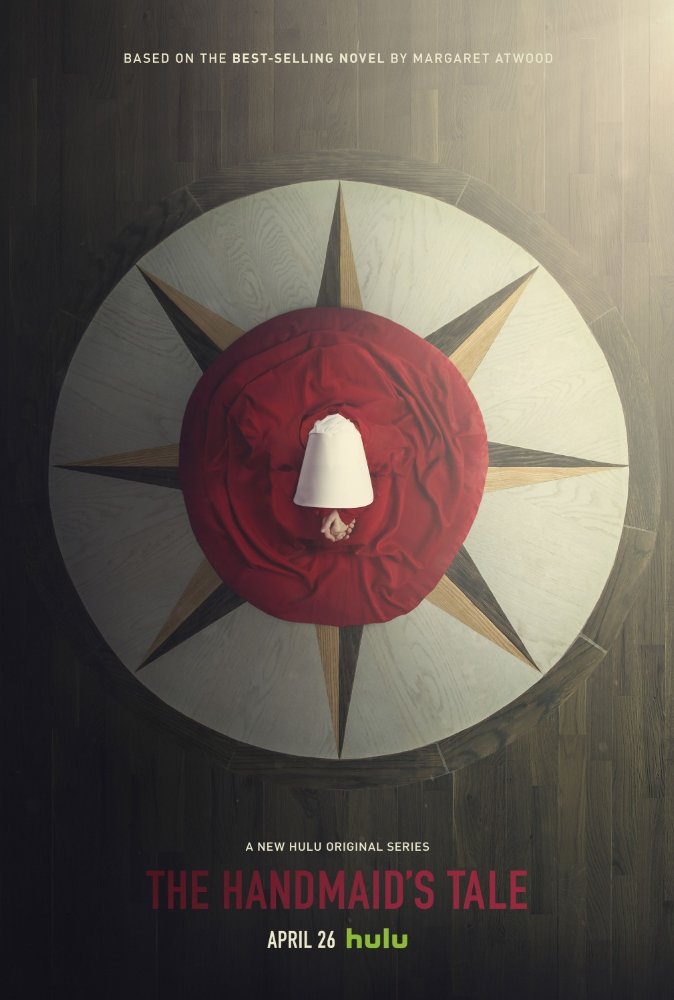 I came across The Handmaid’s Tale about ten years after it came out, in 1985. I was very young and yet the book still captured my attention, but more than that it made me cognizant of power structures and power inequalities in the world.  Not the obvious ones like money or physical or even political power, but the kind of subtle power dynamics that exist between men and women and how our very institutions reinforce that structure. It is my favorite book of all time; I wasn’t quite able to articulate it then, but I knew what was happening in Gilead wasn’t right. It disturbed me to see similar societal and cultural exchanges in the world around me. The real world. Those things aren’t supposed to happen here.

Of course the idea that, “It could never happen here,” is exactly the denial that Margaret Atwood targets in her novel and then proceeds to show us exactly how it could. In interviews she has highlighted how persecution and enslavement have already happened in the past. Atwood sets the novel in Massachusetts, home state to the Salem witch trials, a historical example of societal oppression of women and a culture of fear. Where it happened once before, and may yet happen again.

The Handmaid’s Tale is now a near future dystopian television series. I was thrilled to have the opportunity to see a screener of the first two episodes from Hulu. The story follows Offred (literally Of Fred), a concubine in a nation at war, where environmental pollution has caused reproductive rates to fail; where a woman’s value is attached to her womb; where a theocratic government has taken control, restructuring society to mirror biblical concepts.

All the descriptions you’ll read about the novel and series focus on the political nature of the story, but what is unique about The Handmaid’s Tale is that it is very much a human story, told from a single woman’s point of view. Similar novels such as 1984 or Brave New World dazzle us with the technological changes in society; we see what government has done and what government has become. The Handmaid’s Tale is a dystopia that lets us see how small our individual lives become under these kinds of totalitarian regimes. This is something that the Hulu series has captured well, and it is not something that can be done easily. How does a series engage the viewer with a personal story, keeping that story intimate rather than transforming it into a prologue to a variant of the Hunger Games?

Offred (Elisabeth Moss) has been assigned to the home of Commander Waterford (Joseph Fiennes)  home where she is to serve as handmaid, a walking womb. Waterford’s wife, Serena Joy (Yvonne Strahovski), is unable to conceive therefore both needs Offred and hates her. The use of voiceover to show the contrast between the silent and reserved Offred, and her often snarky thoughts gives us insight into a woman who has to submit to a society, one with a rigid hierarchy and the attendant rules of behavior—not unlike Puritan Massachusetts. Underscoring her voiceovers, Elisabeth Moss uses her expressions and glances to speak volumes. Which is necessary with a character that speaks little and with a show that keeps the camera literally in her face for more than 50% of the episode. I have to say she really embodies this role.

In addition to Offred, we are introduced to several other women. To reduce spoilers, I’ll only mention two: Moira and Janine. Moira is played by Samira Wiley (who many of you may recognize from Orange is the New Black). Where Offred rebels in her mind with us as the only witnesses, Moira is the true rebel, the potential revolutionary.  She is the Handmaid who pretends to accept and is just waiting for an opportunity to escape. What is fascinating is that she is the kind of character that American film usually follows—rather than Offred. Madeline Brewer plays Janine, who is the other end of the spectrum; a woman who after initially rebelling, submits to society’s requirements and eventually embraces those expectations. I hope, moving forward that we get to see how society and culture impact each of these women, their identities and their sense of self. We see hints of it when they are all at the Red Center, where they are re-educated and trained for their new lives as Handmaids.

The first two episodes were directed by Reed Morano and she has given these episodes an amazing cinematic feel. Her experience as a gifted cinematographer gives her an eye for shots that are artistic photographs—using light and color to evoke emotion—red for Offred, green for Serena Joy. The flashbacks have a slightly different flavor and let us see Offred as she was, drawing a strong contrast to who she is now.  Without spoiling anything, I’d urge you to take a look at the trailer again. Each scene has a specific purpose and feeling.

One particular thing that caught my attention was the diversity of the cast in the THT series. I love this. I love this because I know it was done consciously. In the original novel, black people are called “Children of Ham” and were all deported to the Midwest. There were NO characters of color and yet, in the first two episodes we see several, including Moira. To that point, in a January 2017 interview with TVLine, executive producer Bruce Miller stated, “what’s the difference between making a TV show about racists and making a racist TV show?” and he made the decision to have the series focus on the idea that “fertility trumped everything.”

The writing for the episodes is solid and gives us just enough information to piece together the world and what has happened without drowning us in exposition. I do like the moments of humor in Offred’s inner monologue/voiceover as well. However, if I had to voice a concern/complaint it would be that the pacing seems a bit off. It just didn’t move me as strongly as the novel. Perhaps without ups and downs there wasn’t as much buildup of tension as one would expect. Granted, with more television series being released a full season at a time, a slower buildup is becoming more the norm.

The sense of oppression and impending retribution is constant. Offred’s rebellious thoughts and flashbacks to her life before don’t alleviate that feeling. While this is part and parcel of the story, it makes the series feel a bit one-note and I think it will wear down the audience emotionally. That may change as the series continues but I’d argue it is a risky choice. (As a note: Jessica Jones has a similar-style build so don’t write The Handmaid’s Tale off just yet). In contrast to the slow pacing and tone, the story moves blazingly fast. By the end of the second episode we have already covered over 70% of the novel which makes me quite curious as to where the series will go next.

I loved the novel but I’m still making up my mind about the series, yet I’ll tell you folks, Hulu’s The Handmaid’s Tale is worth the watch. At the very least, you’ll certainly think about how the issues and ideas put forward in the series relate to today’s world and where you would stand.

In the end: I have to applaud Hulu for taking on a dystopian classic and putting forward a series that has rich political overtones, beautiful imagery, and some amazing acting.