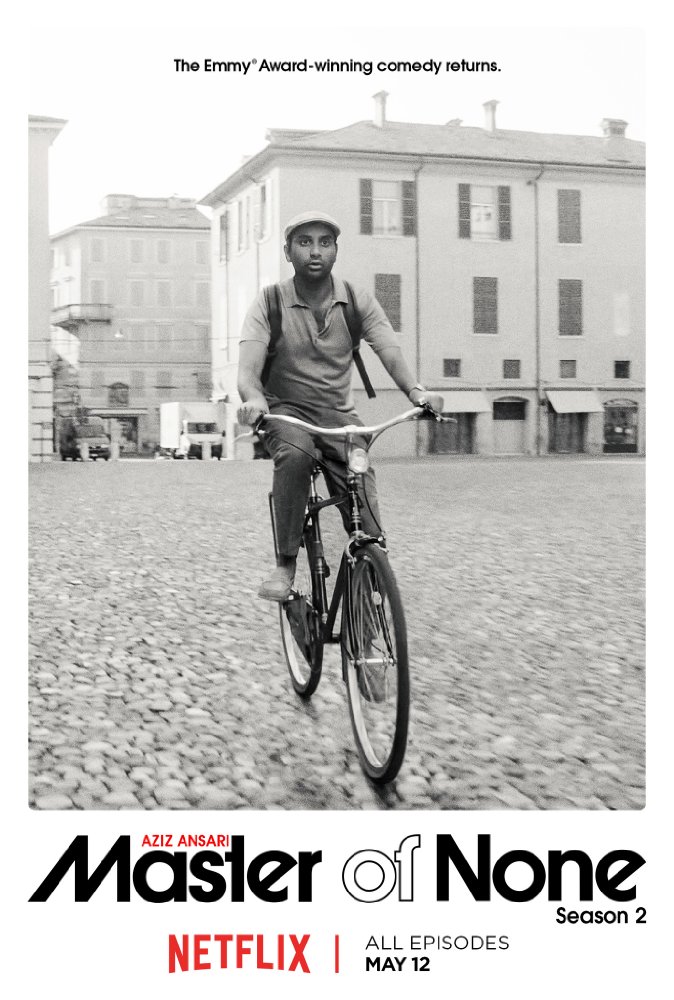 Master of None - Season 2

Basically: When it comes to life and all its complications, Dev (Aziz Ansari) might be a Master of None, but he’s getting there.

Alanis Morissette once sang, “Well, life has a funny way of sneaking up on you” (bear with us—this song wouldn’t be out of place on the show’s unexpected soundtrack). It’s safe to say we’ve all experienced those moments she sang about, but we don’t often see that version of reality on screen. Because when does life ever turn out like Hollywood paints it? Enter Master of None.

What drew so many of us into the Netflix original is how human it is. There’s a raw, unpredictable and honest charm to each short film-esque episode that captures life in all its diverse beauty, humor, and grey-areas. And season 2 doesn’t hit the sophomore slump; each episode will surprise you at every turn, turning conventional plotlines, styles, and perspectives on their head.

When Season 1 left off Dev left acting and New York behind, heading off to Italy to discover his inner foodie. The show delivers on showcasing Italian culture, lifestyle, and most importantly, pasta—you’ll see enough #foodporn to have your stomach rumbling all the way through the first few episodes. The season opens, Bicycle Thieves-style, in a black and white episode with dialogue almost entirely in Italian, giving you a real nostalgic feel. There’s an arthouse quality running throughout the season and it’s beautifully shot, adding a magic touch of unpolished authenticity. But don’t let the artsy vibe fool you, every aspect and stylistic choice has been carefully applied to develop Dev’s character and the issues the show explores.

The season jumps around, following Dev as he explores Italy, then returning to New York to explore the dating world back home (including some women he should have swiped left on). Even in the montages and short cutaway scenes the show digs deep, talking about issues of race and bias in online romance, and cultural expectations about love and relationships. One of the most poignant moments comes via Dev’s best friend Denise (Lena Waithe) in showing her backstory and highlighting the cultural and familial issues she dealt with growing up. Coming in late in the season, the ‘Thanksgiving’ episode strikes a perfect balance between personal and universal.

A multitude of different stories and perspectives weave in and out of Master of None to make up a rich tapestry of the human condition. Dev’s growth is most importantly fleshed out in season 2, moving past the foundations of an introductory season into a character that is more comfortable chasing what he wants—adding in touches of humor Ansari is known for delivered with impeccable timing. His search for something real and authentic—and all the complex ups and downs that comes with it—will have many of us smiling wistfully, laughing hard, and aching with past struggles. Because while the faces and names may change, and the backdrop might differ, it’s those universal experiences we all go through that keep this show grounded in this thing we call life.

In the end: Funny, poignant, and altogether human, let Master of None surprise you in a way only it knows how. Catch season 2 on May 12, only on Netflix.