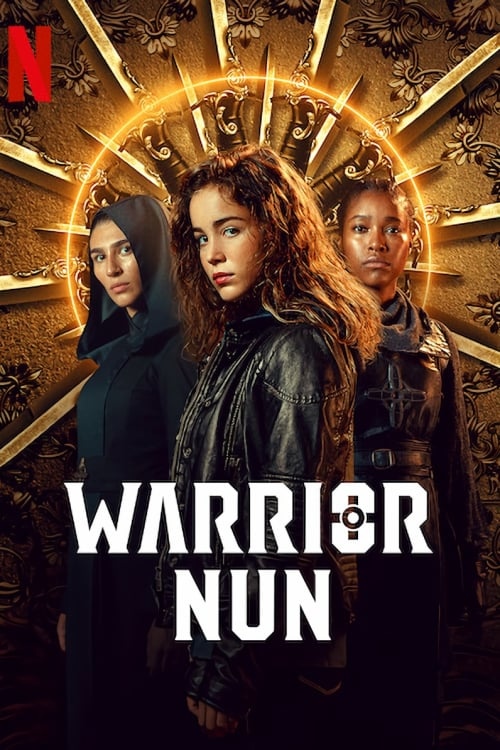 Basically: The fate of the world is left to a 19-year-old orphan and a secret sect of murder-nuns run by the Vatican because…2020.

Welcome to the fantasy drama series created by Simon Barry, whose CV includes Ghost Wars, Continuum, and Van Helsing. His latest series Warrior Nun begins with a living dead girl (like all great mysteries). Through an Aristotelian confluence of events (a series of improbable impossibilities) that include paraplegia, suicide, and bad writing, Ava (Alba Baptista) finds herself at the center of the war between heaven and hell. Once again, it’s 2020, ain’t nothing working out for anybody. Oh, how I miss the simpler times of murder-hornets. I am sure Ava does as well.

Warrior Nun is based on a comic book of a similar name, Warrior Nun Areala, by the writer, artist, and publisher Ben Dunn. Dunn created a story about a Joan of Arc-like heroine who fights demons, evil, and the patriarchy as part of the Order of the Cruciform Sword—the fictional military order of Warrior Nuns AND Magic Priests. For what it’s worth, Netflix’s version did have the murder-nuns in it. To be blunt, this show is the equivalent of Cajun Gumbo Clam Chowder—paranormal tale, nascent hero, monsters, secret orders, conspiracies, and even an odd romance thrown into the pot. But like that mixed up Gumbo Chowder, sadly it lacks any flavor or depth beyond a glimmer of the show’s intent. Ava does her best fourth-wall-breaking schtick…ALL THE TIME. Her constant prattling on about moments while they are visually occurring…on screen…only serves to annoy. Any chance of absorbing a scene and its impact is ruined by her poorly timed two cents. It immediately pulls you out of the show and makes her character uninteresting. People tend to get kicked out of theaters for that behavior. Which is indicative of the show presentation overall.

While no show can truly be called a lost cause—at least not yet—Warrior Nun falls into the trap of not enough too soon. The characters lack gravitas for the roles they are placed in. The priests seem more akin to the Spinal Tap drummers, going through the classic motions until the inevitable kill-me-plot-armor move that is sure to come. The Nuns are better suited to face the horrors of Sunday School rather than an oncoming demonic conflagration. I would like to believe the show ceases to be predictably shallow; however, upon viewing the first three episodes, I find that highly unlikely. Warrior Nun also has the unenviable task of trying to stand out in the crowded field of the many fantasy-style, religious, murder-nun shows that are pervasive during our current streaming wars. Simple good writing with plot, character development, and avoidance of trite teen tropes just won’t cut it. This is made evident by the handling of Shotgun Mary (Toya Turner), a fascinating character with a look and attitude brought forth by the actress which is instantly undercut by an underwhelming script and maudlin dialogue reminiscent of that awakebutstillinbed album you ordered off WISH. Dunn created a rich world that could be fun to cull to produce a truly visual and exciting new genre. Sadly the creators of the show went a route where one-liners and moody-mean-girl private school angst dictates everyone’s behavior.

In the End: Warrior Nun is what happens when 1997 Spawn and Joss Whedon’s Buffy The Vampire Slayer have a baby and leave it at a fire station under the safe-haven law.