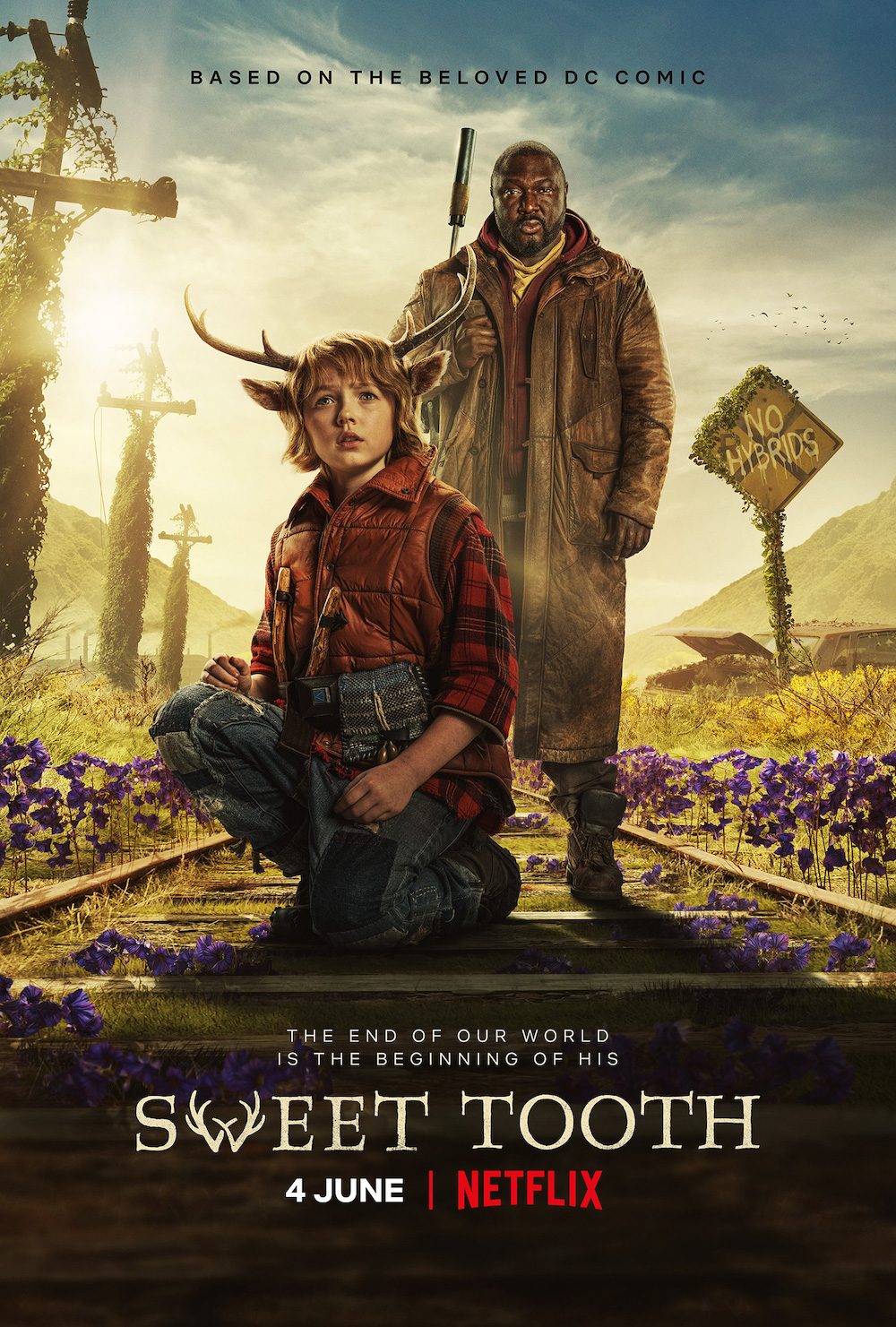 Basically: A hybrid boy, who is half deer, grows up in a post-apocalyptic world and it isn’t pretty.

The world is hit by “The Sick” and, while the death toll is harsh, what’s even scarier is that all the newborns in the world are now half animal/half human. Gus (Christian Convery) is one of those newborns but he’s been secreted away by his dad (Will Forte) to escape the Sick and the fall of society. Ten years later Gus is starting to wander out into a world that his father was right to hide him from. Hybrids are hated, men are cruel, and resources are scarce — and while Gus looks for his mother he will be faced with more than any one child should have to.

Sweet Tooth is a great series. The writing is tight, the acting is awesome, and the story is astounding. Bingeing this series is a MUST! The tension that flows from one episode to the next makes stopping nearly impossible. Gus (Convery) makes it easy to be invested, he is a good kid with the cutest ears ever. The Big Man/Jepperd (Nonso Anozie) is a powerful a-hole with a heart of gold. Together they are a force on the screen, they sweep you along with them and you won’t look back. The choices that creator/director Jim Mickle makes are sublime and masterful. The passage of time in one scene — represented by items moving, appearing/disappearing, and aging paired with the flow of the sun through the room — is stunning. In another scene, rain and lightning make a fight more magical than brutal. Even the small things: an overturned truck in the background, a downed wind turbine, a bright pink piece of plastic that has not weathered with age contribute to make this an eerie and compelling series.

There are a few hiccups that I have issues with. The series hasn’t really decided what Gus’s animal “powers” can and can’t do, so we have an early episode that doesn’t really make sense if you look back on it. There are also a few things that are incongruent with the world the way it has been set up. I believe a little more explanation as to how things work would fix these — then again, we are discovering the world as Gus does so perhaps that is intentional.

In the End: Grab a blanket, curl up, and get ready to go on a thrill-ride from your couch. Watch this immediately, if not sooner!

Watch Sweet Tooth on Friday, only on Netflix.