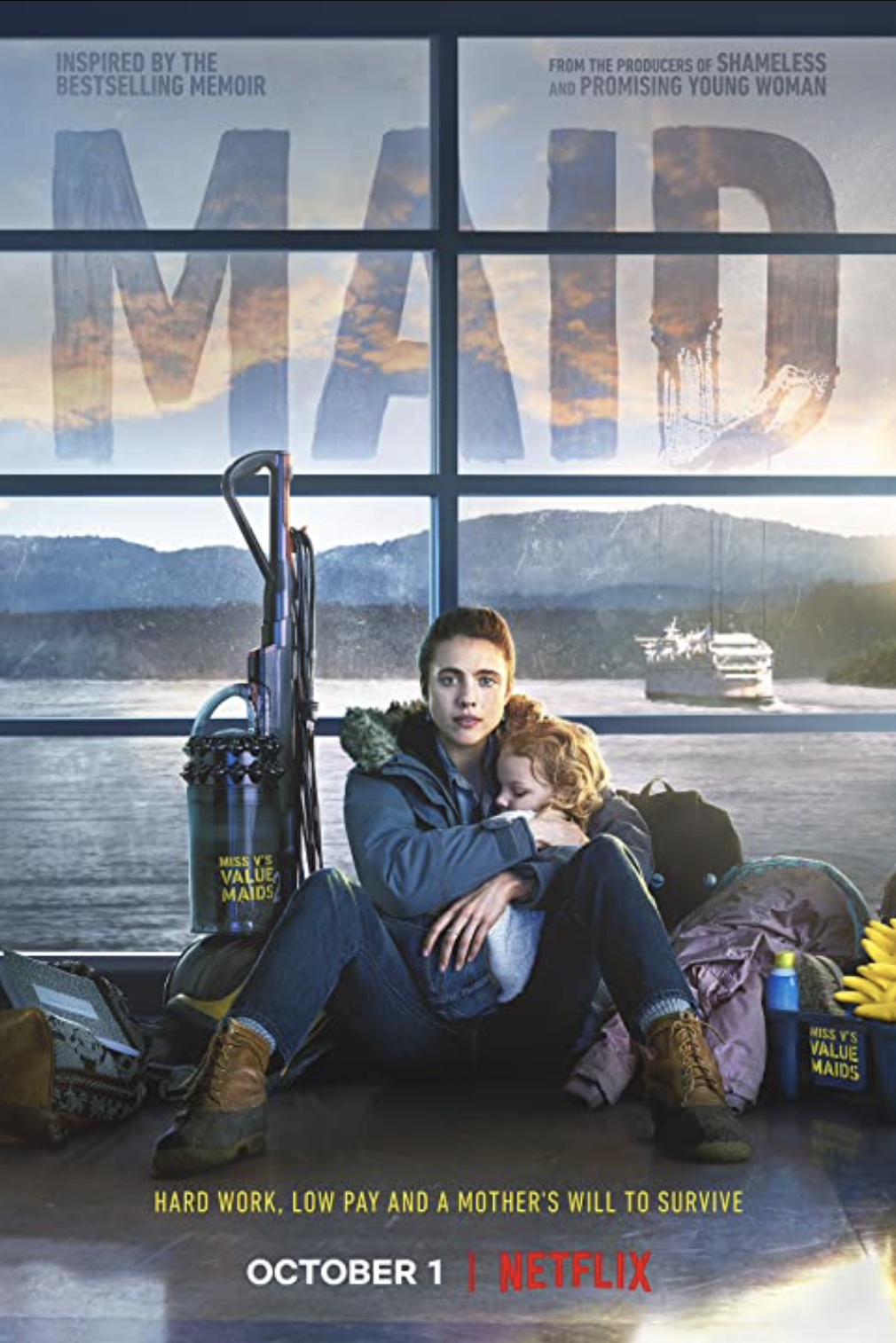 Basically: The story of one young mother’s desperate fight to survive and make a better life for her daughter.

Getting out of an abusive relationship can feel impossible. That’s the immense challenge facing Alex (Margaret Qualley)—she’s a young mom with no independence and no support network she can lean on. But when her partner (Nick Robinson) punches a hole in the wall and throws a glass at her head, she knows she has to take her baby girl, Maddy (Rylea Nevaeh Whittet), and get out.

Unfortunately the systems meant to protect survivors often do more harm than good and Alex is so desperate she accepts far less than she deserves in order to keep her daughter safe. When she takes a cleaning job designed to keep her in poverty, it’s less out of choice and more out of need to get her life back on track. From there it’s a constant battle of trying to stay afloat when expenses outweigh income and goodwill is stretched too thin—it’s a brutally realistic portrayal of how expensive it is to be poor. Qualley is a captivating lead. Alex doesn’t say much of what she’s feeling but her anger radiates out from under every smile, every trauma, and every rejection that keeps her running. And her plight is like an open wound—you’ll feel it in your chest for every survivor who tries to break the cycle of abuse in a system stacked against them. You also can’t help but think about how disproportionately systemic poverty and discrimination affect people of color; and wonder if she was not white whether Alex would have been offered as much help as she was.

On her journey she meets many amazing and unwaveringly kind people, many other flawed and hurt people, and many people who are somewhere in between. The cast play their parts so beautifully you’ll believe them—from Andie MacDowell’s eccentric and manic Paula to Anika Noni Rose’s seemingly cold lawyer Regina to BJ Harrison’s mama-to-all Denise—they all deserve applause. MAID is beautifully written, portraying the light and the dark of this world through only a few people. And it’ll take you by the hand through it all with an immense amount of grace, nuance, and understanding. You won’t be able to look away.

In the End: This beautiful exploration of a mother’s love opens up a conversation about the way the systems in place fail so many of us. Let MAID renew your fire to push for change—for her, for her daughter, and for all the survivors whose stories don’t get told.

MAID comes to Netflix on October 1.