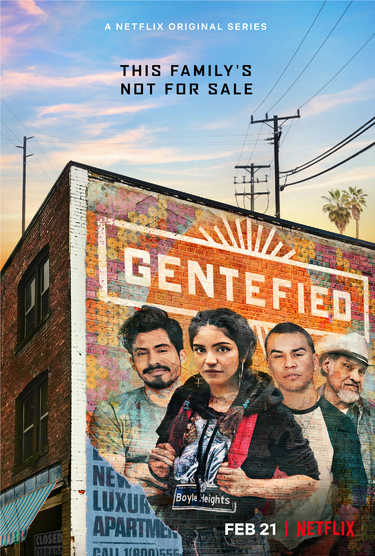 Basically: What happens when you mix three Mexican-American cousins, the American Dream, and the best tacos in Boyle Heights? Have a seat at Mama Fina’s and find out.

If the saying “you can’t go home again” is true, then what happens when home isn’t there anymore? This is the premise of the Netflix comedy-drama Gentefied. It’s about family, tradition, and the promise of a better tomorrow. Based on the digital series entitled Gente-fied created by Marvin Lemus and Linda Yvette Chávez, this series focuses on seven Latinx characters dealing with the effects of change in L.A.’s Boyle Heights. Bi-cultural millennials and old-school paisano business owners hustle to create spaces that celebrate their Latinx identities, while facing rent hikes, a housing crisis, and a steady stream of outsiders threatening to gentrify their “barrio”.

Picked up by Netflix as simply Gentefied, we are introduced to the Morales family. Casimiro “Pop” Morales (Joaquin Cosio) is the patriarch and owner of Mama Fina’s Tacos, a staple in the Boyle Heights community. A proud man, Pop has to deal with a world he promised his family…but that world apparently no longer has no place for him in it. His grandson Erik (J.J. Soria) stands as Pop’s second at Mama Fina’s.
With dreams of running Mama Fina’s someday, Erik wants to honor and protect his grandfather’s legacy. A once-troubled young man, Erik has challenges of his own to face—namely a child on the way with his somewhat-estranged “girlfriend” Lidia
Solis (Anna Gonzales), a Stanford graduate who has returned home to give back to
the community. A far-cry from Erik’s cousin and Pop’s second grandson is Chris Morales (Carlos Santos), a modern-day chef with his own plans for Mama Fina’s. Those plans have all the trappings of gentrification’s finest culinary abominations. Four words, people: “Chicken tikka masala tacos.” Caught in the middle of this tumultuous taco tantrum is Ana Morales (Karrie Martin), Pop’s youngest granddaughter. She has her own dreams but must contend with being a queer woman of color with a passion for art and an aunt who doesn’t understand why her niece can’t get a REAL job. As an artist and writer, that bit of dialogue hit me right in my second-generation Haitian heart.

If all that sounds overwhelming, imagine being the family. In truth, the brilliance of the series lies in the depth of the characters. Each one sheds light on the struggles of living in two Americas—on one side, your culture and family are who you are no matter what anyone says. On the other hand, a future you have been raised to not only want but believe is achievable. This balancing act is where the series shines. It is an unabashed look at growing up as an immigrant in an America that thrives on enjoying the contribution of the “Latinx” but fails to recognize there is more than just tacos, tequila, and Cinco De Mayo celebrations in that contribution. The talented cast shows us a world that we may not understand but we can still identify with. The mistake many shows seem to revel in is the insistence that the audience see stories like this through the lens of white Americans—seeking to show parallels to elicit sympathy for this “urban” narrative. Gentefied is unapologetically LATINX. Switching effortlessly between English and Spanish, they blend slang from both languages seamlessly into their conversations, always reminding you who these people are. They even joke about using their “white voice”—and yes, America, EVERY PERSON OF COLOR has a white voice. It’s how we assimilate to survive and allows us not to have to justify our presence in a country that says, “Give me your tired, your poor, Your huddled masses yearning to breathe free.”

From the very beginning, you are shown not a cliché of a story but a community. We are shown beautifully funny, flawed, tragic, ridiculous characters that you root for because you see yourself in them and every hurdle they face. From Erik’s disastrous attempts at courting his estranged girlfriend to Chris’ daily struggle to prove he is “Mexican” enough, we are shown this is a family.

This is a community.

In the End: Gentefied has all the ingredients of a classic American story about family. It recalls the past in order to build a better tomorrow while trying to leave no one behind. The only difference from other stories we’ve seen is there is more seasoning and flavor to this recipe.