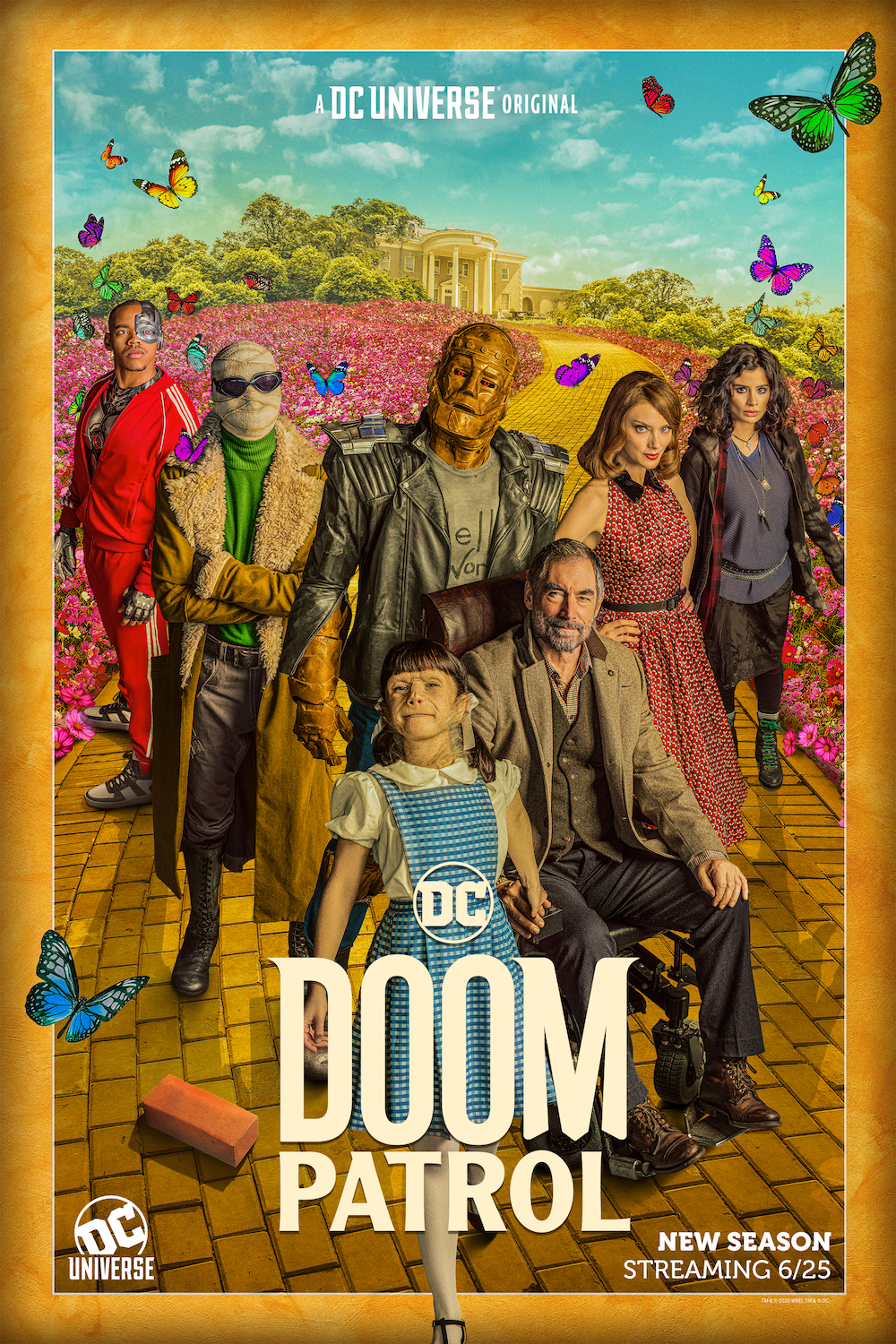 Basically: The weirdness continues as the Doom Patrol confronts the consequences of the past while trying to find their way into an unknown future.

When we left our heroes, they had defeated Mr. Nobody, the architect of their miseries and arch-enemy to The Chief (Timothy Dalton), but at a terrible cost—the members of the Patrol found out The Chief had caused all of the “accidents” that led them to becoming misfits of science. Robotman/Cliff Steele’s (Brendan Fraser) car crash had been set up. Rita Farr’s (April Bowlby) exposure to a metamorphic chemical on a film shoot was deliberate. Crazy Jane (Diane Guerrero) was manipulated into fracturing into 64 personas, all with different powers. And the flight path of test pilot Larry Trainor (Matt Bomer) was arranged to intercept the Negative Spirit that bonded with him. Only Vic Stone/Cyborg’s (Joivan Wade) tragic past was untouched by The Chief, but Vic remains with the group regardless.

It was a massive betrayal and this season opens with the fallout of that. Oh, and the team is shrunk to two inches tall with no means to regain their proper size. To pass the time, Rita practices using her elastic body with Cyborg’s coaching, Cliff feeds rats in order to lure them out, Larry—the only one NOT shrunk down—devotes his time to building miniature furniture and cooking miniature food, Jane meditates and tries to stay in control of her fractious splinter-selves… and The Chief’s rediscovered daughter, Dorothy Spinner (Abigail Shapiro)—who spent time as a Carnival “oddity”—wants only to fit in. Even though The Chief keeps a close eye
on her…

How they get back to normal, and the consequences of having the Chief’s daughter among them, kick off what promises to be a season just as weird as the first.

If you were a big fan of the first season, the show has evolved some and is not quite the same as you remember. There is no snarky meta-narration, no sly commentary on the characters—this season plays it much straighter than before. Which oddly enough raises the personal stakes and grounds the emotionality effectively. All of the cast has upped their game, with the writers giving the actors the opportunity to continue developing these characters. The shape of the season begins to come into focus early, too, with Dorothy at the center of a mystery: Who is urging her to do the things her father fears so much? And what “friends” exist in Dorothy’s world that have yet to be seen…or perhaps fought?

Building upon the strange foundations of the first season, season 2 smoothly continues the story of a group of broken not-quite-heroes who aren’t a family or a therapy group but maybe somewhere in between. And Doom Patrol bids to keep on being one of the DC Universe’s hidden gems.

In the End: Though this will feel VERY different to fans of the show, the second season looks like it will deliver every ounce of strange adventure that the Doom Patrol is known for. Recommended!