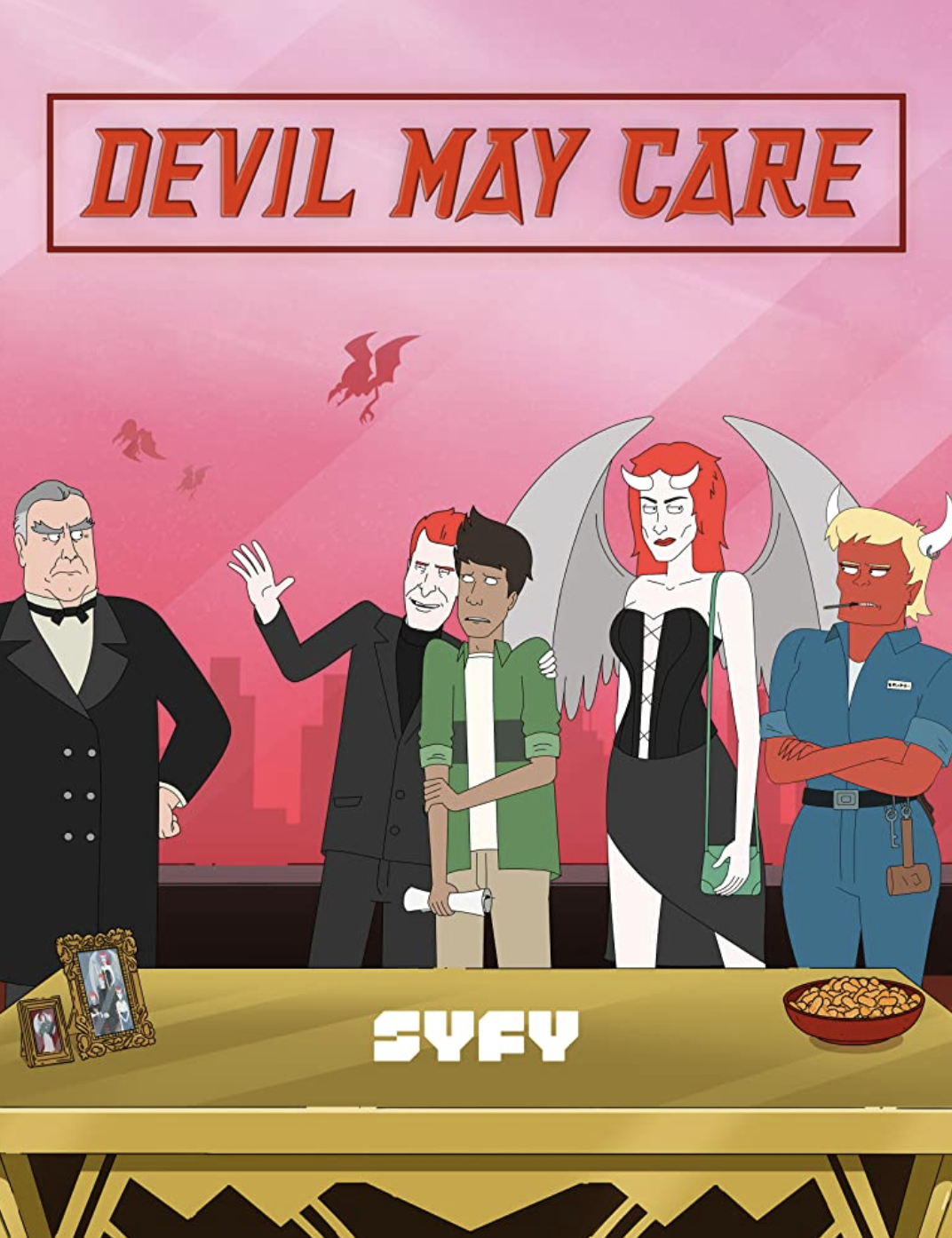 Basically: A workplace comedy like 30 Rock or The Office (US version) but set in Hell.

Devil May Care is another one of the adult audience-focused animated series that are all over the TV landscape these days. To be honest, I’m pretty tired of these types of cartoons, I’m an old curmudgeon and I like my cartoons focused on the kid demographic. So I went into this skeptically, like: Here we go again, a cartoon focused mostly on writing. But I must say I was completely wrong and I really like Devil May Care. I laughed through each episode.

Now for the setup: A young guy named Beans has just died and ends up at Hell’s gates. From there he’s taken directly to the Devil to act as his new assistant. The Devil has a plan and needs Beans’ help as a young person to achieve his goal of making Hell the best place to live in all creation. So he has Beans assist him in creating social media in Hell and from there all the hijinks ensue. Alan Tudyk’s Devil brings such an upbeat optimistic take to the character. His voice acting doesn’t play into the super cool suave type or the dark evil type. He’s full of energy and go-get-’em attitude. Our Generation Z point of view character Beans is voiced by Asif Ali who does it with the perfect type of awkwardness needed as Beans never totally knows what’s going on and is completely out of sorts with his idea of Hell. A bulk of this workplace comedy is about the Devil having a grand idea and Beans figuring out how to do it with different levels of success.

The Devil’s right-hand man is President McKinley (Fred Tatasciore) who is usually Beans’ rival in the workplace. Tatasciore does a hilarious job playing this surprising use of an American President that most couldn’t even hope to remember. Pamela Adlon plays the Devil’s wife Regina, a succubus who wants the Devil to go back to his old ways of torture and damnation. Adlon uses a Russian-like accent that adds to the comedy especially when interacting with Beans. Aesthetically Devil May Care doesn’t wow and isn’t really my cup of tea but the animation works well, especially with how it uses the apparent and subtle jokes on screen. Little things from the past that have fallen out of favor litter the world in Devil May Care, which makes you really pay attention to see how many little jokes you can catch before the scene moves on.

Another thing I enjoyed is the runtime. Episodes are around 12 minutes long—matching some of the more popular children’s animated shows. Nothing gets drawn out with this runtime, the storytelling stays very focused with smart and tight jokes. Nothing really dwells on anything and there aren’t any unnecessary plots with all the main characters. The one thing I didn’t like was that it was only seven episodes but that might not be a bad thing. They should leave us wanting more than having too much.

In The End: Devil May Care is a really entertaining and funny new cartoon using a unique setup that I hope gets a nice run on SYFY.

Stream new episodes of Devil May Care
every Saturday at midnight on TZGZ on SYFY.